GBP/USD tested 1.2288 yesterday. At that time, the MACD line was far from zero, so the upside potential was limited. The pair then continued to move down even after testing 1.2252, falling to 1.2199, where buyers became active again. However, long positions only led to loses as there was no rebound in the market. No other signal appeared for the rest of the day. 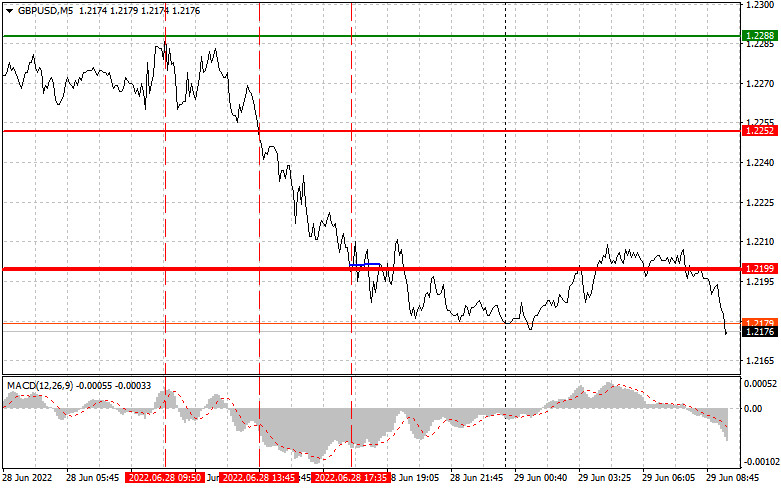 The lack of statistics did not help the pound yesterday, while the speech of MPC member John Cunliffe was ignored by the market. Most likely, the upcoming reports on consumer lending and retail prices in the UK will lead to a surge in volatility, but the overall trend will be bearish. And if the speech of Bank of England president Andrew Bailey becomes more hawkish, pressure on pound will continue. In the afternoon, Fed Chairman Jerome Powell and FOMC member James Bullard will also speak, followed by the release of US GDP data for the first quarter of 2022. If the report is revised for the better, demand for dollar will increase.

Buy pound when the quote reaches 1.2205 (green line on the chart) and take profit at the price of 1.2251 (thicker green line on the chart). There is little chance for a rally today, especially in the face of weak statistics from the UK. Nevertheless, remember that when buying, the MACD line should be above zero, or is starting to rise from it. It is also possible to buy at 1.2169, but the MACD line should be in the oversold area as only by that will the market reverse to 1.2205 and 1.2251.

Sell pound when the quote reaches 1.2169 (red line on the chart) and take profit at the price of 1.2125. Pressure will return if there is no bullish activity in the market and if the UK releases weak economic statistics. However, when selling, make sure that the MACD line is below zero or is starting to move down from it. Pound can also be sold at 1.2205, but the MACD line should be in the overbought area, as only by that will the market reverse to 1.2169 and 1.2125. 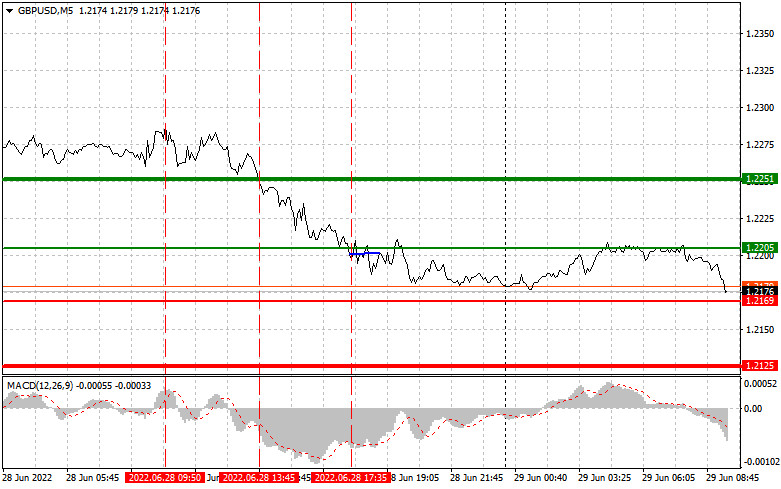