Forex Analysis & Reviews: How to trade GBP/USD on September 23? Simple tips for beginners. 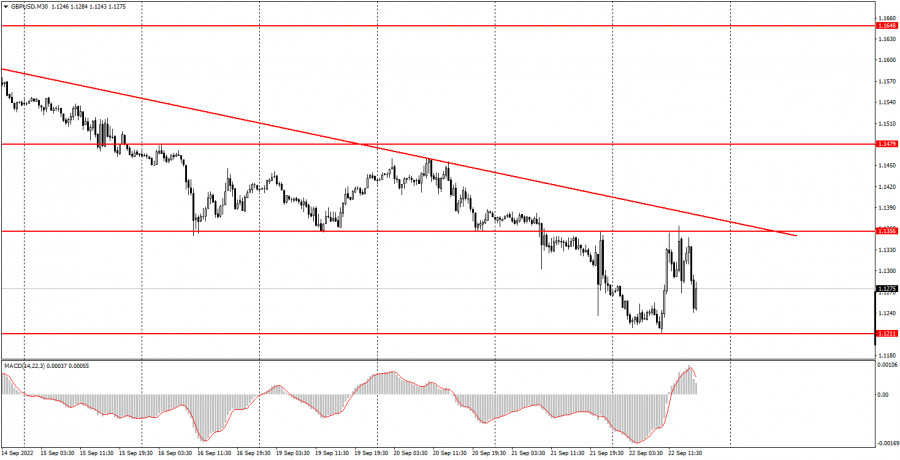 The GBP/USD pair on Wednesday evening and Thursday morning continued its downward movement and once again updated its 37-year lows. Now they lie at the level of 1.1211, which was reached on Thursday. It should be noted that traders worked out the results of the Federal Reserve meeting both at night and this morning. A relatively strong upward correction began only in the European trading session, as a result of which the pound rose to the level of 1.1356. However, a rebound from this level provoked a new round of decline, which coincided in time with the release of the results of the Bank of England meeting. The British central bank decided to raise the rate by 0.5%, which was negatively perceived by the market, as in the previous six times. The market still believes that the BoE should take tougher measures to counter rising prices, so even another rate hike did not help the British currency. It should also be noted that geopolitics has aggravated the position of the euro and the pound this week. This is also an important factor and now both factors, geopolitics and fundamentals, can continue to put devastating pressure on the British pound. We have also rebuilt the trend line, which is now more convincing. We do not recommend considering long positions until the price settles above this line. 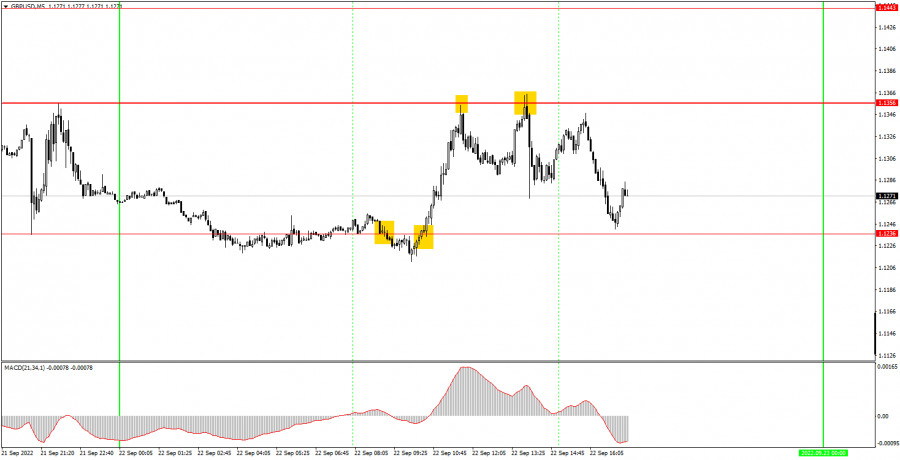 Everything was very good with Thursday's trading signals on the 5-minute timeframe. First of all, because there were movements during the day. It is very good that the main price reversals during the day happened near important levels, and not somewhere in between. The very first sell signal turned out to be a false one as the price settled below 1.1236 (Wednesday's low) but failed to continue down. Loss of 26 points. This was followed by a buy signal, after which the price went up 100 points and rebounded from the level of 1.1356 with an error of 2 points, which is acceptable for the pound. Profit on this trade was 70 points. The rebound from the 1.1356 level should also have been used to open short positions. The price did not have time to fall to the level of 1.1236, so the position had to be closed manually half an hour after the announcement of the results of the BoE meeting. Profit is about 20 points more. After the results were announced, another sell signal formed near the level of 1.1356, but it was still quite risky to work out. If the beginners missed it, then it's okay, since the total profit of the day was still 90 points. If they worked it out, they could earn another 55 points.

How to trade on Friday:

The pound/dollar pair continues to fall on the 30-minute TF, which is visible even without a trend line. The geopolitical situation worsened, and the results of the meetings of the BoE and the Fed, although not completely and unequivocally in favor of the dollar, nevertheless provoked a new fall in the pound. It makes no sense to consider longs before settling above the trend line. On the 5-minute TF on Thursday it is recommended to trade at the levels 1.1211-1.1236, 1.1356, 1.1443, 1.1479. When the price passes after opening a deal in the right direction for 20 points, Stop Loss should be set to breakeven. The UK and the US are set to publish reports on business activity in the services and manufacturing sectors. They can theoretically influence the pair's movement, but the market may continue to work out the results of the Fed and BoE meetings.

How to trade GBP/USD on December 5, 2022. Simple trading tips and analysis for beginners

GBP/USD repeated all the movements of EUR/USD on Friday. On the one hand, this is a good thing because both major currency pairs have always traded in a very similar

How to trade EUR/USD on December 5. Simple trading tips and analysis for beginners

EUR/USD just showed paradoxical movements on Friday. Basically, all of the main movements were provoked by the NonFarm Payrolls report in the U.S. However, to start with, let's remember