Forex Analysis & Reviews: EUR/USD analysis on September 24. The euro has started building another five-wave structure downwards without a corrective set of waves. 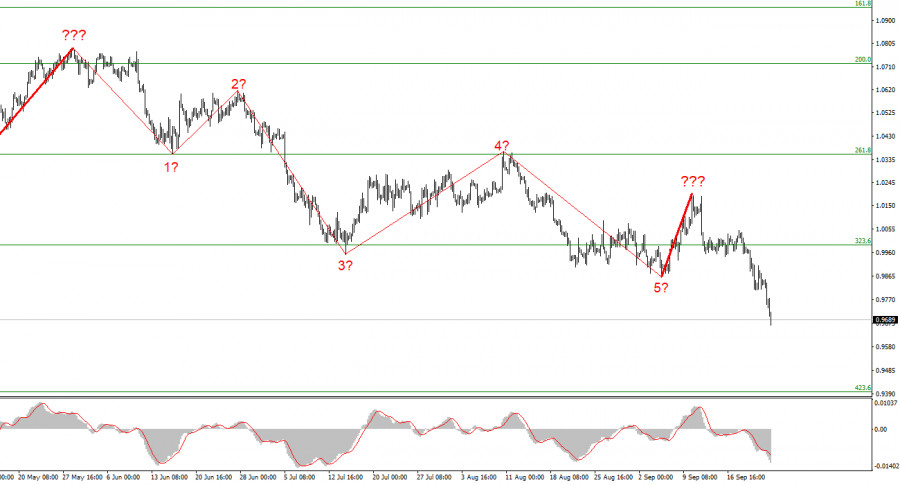 The wave marking of the 4-hour chart for the euro/dollar instrument still does not require adjustments, but it is undoubtedly becoming more complicated. We saw the completion of the construction of the next five-wave impulse descending wave structure, then one correction wave upward, after which the low wave 5 was updated. These movements allow me to conclude that the pattern of five months ago was repeated when the 5-wave structure down was completed in the same way, one wave up, and we saw five more waves down. There is no question of any classical wave structure (5 trend waves, 3 correction waves) right now. The news background is such that the market even builds single corrective waves with great reluctance. Thus, in such circumstances, I cannot predict the end of the downward trend segment. We can still observe the pattern of a strong wave down "a weak corrective wave up" for a very long time. The goals of the downward trend segment, which has been complicated and lengthened many times, can be found up to 90 figures, and maybe even lower.

The business activity indices are like the "cherry on the cake" of this week.

The euro/dollar instrument fell by 150 basis points on Friday. Of the important events on this day, I can only note the business activity indices, which do not have the degree of influence on the market so that the instrument passes 150 points a day. Nevertheless, I must admit that the indices were quite interesting and resonant. Let's start with the indices of the European Union. In the sphere of production, services and composite indices were 1-2 points lower than the previous values. All three indices were below the 50.0 mark in September, below which any value is considered negative. Thus, the European currency could begin to decline on Friday under the pressure of these statistics. In the US, the business activity index in the manufacturing sector increased by 0.3 points, and in the service sector and composite indices increased by 5–6 points (which is a lot), but both remained below the 50.0 mark. On the one hand, such values are still negative, but on the other hand, we are faced with a sharp increase in business activity, which can also be considered a positive moment. Thus, in the afternoon, the demand for the dollar could continue to grow against the background of already encouraging statistics from America.

And at the same time, I do not think that these indices had any impact on the market mood at all. The data are certainly interesting, but they are not that important, and the decline of the instrument was observed almost every hour during the day. Usually, the reaction time to indices is one or two hours, but no more. If you pay attention to how the British collapsed yesterday, then there is even more confidence that the business activity indices did not have a particularly strong impact on the market mood. 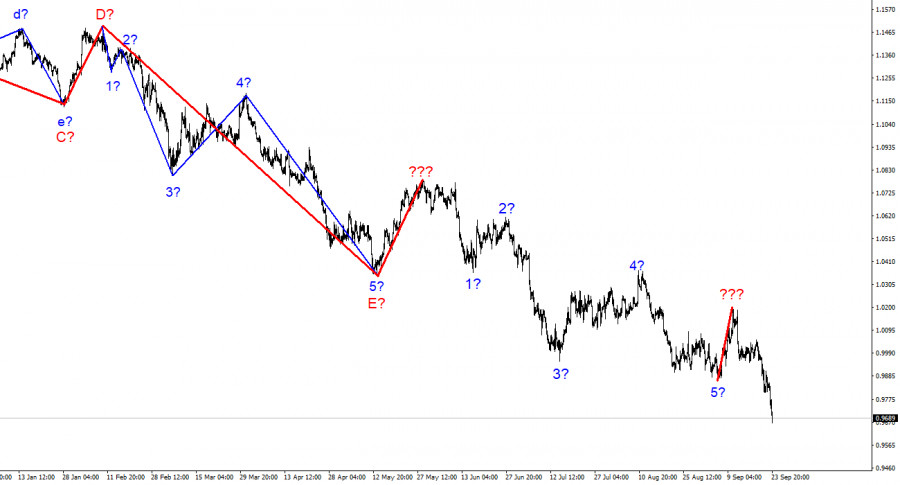 Based on the analysis, I conclude that the construction of a downward trend section continues but can end at any time. At this time, the instrument continues to decline, so I advise careful sales with targets located near the estimated mark of 0.9397, which equates to 423.6% Fibonacci. I urge caution, as it is unclear how much longer the decline in the euro currency will continue.

At the higher wave scale, the wave marking of the descending trend segment becomes noticeably more complicated and lengthens. It can take on almost any kind of length, so I think it's best now to isolate the three and five-wave standard structures from the overall picture and work on them. One of these five waves can be just completed now, and the new one has begun its construction.