Forex Analysis & Reviews: Analysis of GBP/USD. September 28. The British pound was caught in a new maelstrom of events. 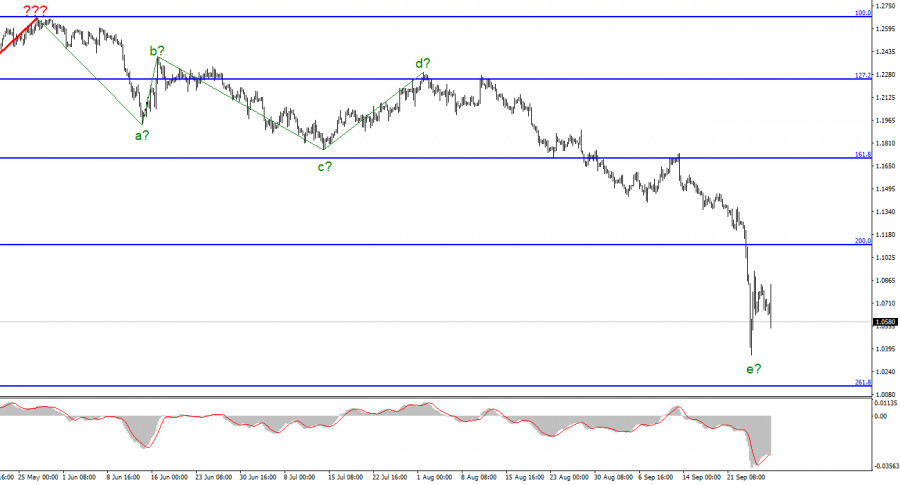 For the pound/dollar instrument, the wave marking looks quite complicated at the moment but still does not require any clarification. The upward wave, built between May 13 and May 27, does not fit into the overall wave picture, but it can still be considered corrective as part of the downward trend section. Thus, it can now be concluded that the downward section of the trend continues its construction. At the moment, we have completed waves a, b, c, and d, so we can assume that the instrument is inside wave e. Within this wave, waves of a lower scale are being viewed, and I can assume that the last increase in quotes is wave 4 in e. If this is indeed the case, then the decline in quotations continues within the framework of wave 5 in e, which can be completed at any time – it has already taken on too extended a form. But the wave marking for the euro currency has already suffered certain changes, which means it can also suffer for the pound sterling. Both the downward trend sections may take on an even more extended form. Both instruments continue to move almost without corrective structures. Therefore, as before, you need to try to isolate impulse structures and work on them.

The Bank of England is starting an emergency purchase of long-term bonds.

The exchange rate of the pound/dollar instrument decreased by 100 basis points on September 28, but activity during the day reached 300 points. Strong movements began after the Bank of England made an official statement in which it announced its plans to stabilize the difficult financial situation. The statement says that the Bank of England will hold a purchase of long-term British bonds, which will not have any volume restrictions. This measure was required after the regulator reassessed British and global financial assets, which showed a sharp deterioration in the situation of the UK public debt. If this process continues, there will be a financial stability risk, followed by a tightening of financing conditions and a narrowing inflow of credit funds into the economy. By buying government bonds, the Bank of England will try to achieve a recovery in market conditions. The Treasury will reimburse all transactions. So far, it is planned to hold an auction to purchase bonds in any volume until October 14.

The market initially took this news positively, and the British dollar rose slightly. But then, there was a sharp decline in demand for the pound, and it collapsed. I believe that such measures by the central bank indicate the criticality of the situation. The British economy may face not just a crisis but a catastrophe. Tax cuts will lead to a budget deficit, which will be replenished with loans using the same bonds. However, bond rates have already risen to 4.7%, which creates an additional burden on the country's budget. The higher the rate, the more the UK government will have to pay on loans. The British pound continues to fall, devaluing British assets. The British pound's exchange rate shows a minimal inflow of investment into the UK economy. All this may continue to lead to a decrease in demand for the pound. 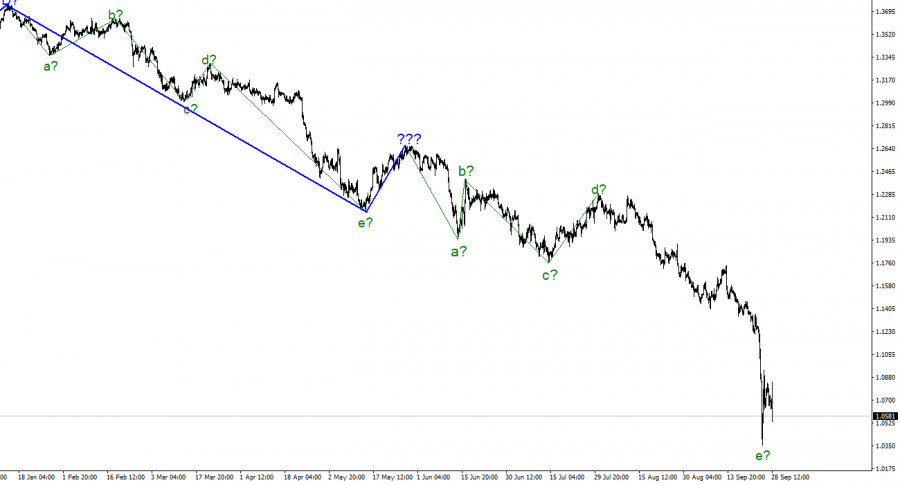 The wave pattern of the pound/dollar instrument suggests a continued decline in demand for the pound. I advise selling the tool now, as before. It is necessary to sell more cautiously since, despite a strong decline, the construction of a downward trend section may be completed in the near future. And the goals of this section are scattered up to the level of 1.0140, corresponding to 261.8% Fibonacci.