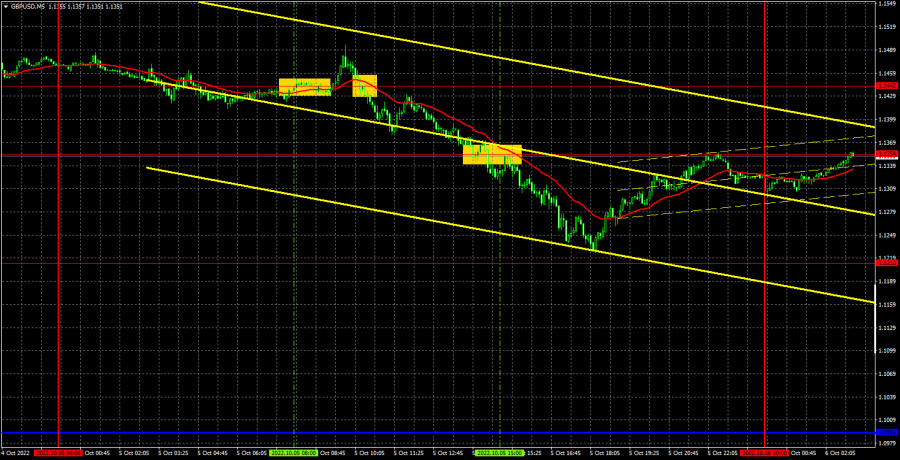 The GBP/USD currency pair again traded almost identically to the EUR/USD pair on Wednesday, which further assures us that the reasons for the fall were technical and again covered in the US or specifically related to the dollar. Formally, traders also had reasons to sell the pound on Wednesday, because in the morning a weak index of business activity in the service sector came out in the UK. However, the time of release of this report and the start of the pair's fall do not coincide, and the report itself was not so important and resonant as to provoke such a strong downward movement (250 points). The pound continues to be traded in a very volatile way, which many could already get used to. The pound as a whole rose by more than 1100 points, so a downward rollback is logical. The pair also remains above the key lines of the Ichimoku indicator, so the upward trend continues. We believe that little depends on the macroeconomic background now, global fundamental events and geopolitics are of greater importance.

In regards to Wednesday's trading signals, everything was very good. The first buy signal near the 1.1442 level turned out to be false, but the price went in the right direction after its formation of 20 points, so traders had to set Stop Loss to breakeven. The next sell signal near the same level was already correct. After its formation, the pair went down about 200 points and just fell short of reaching the target level of 1.1212. Thus, this position should have been closed manually in the late afternoon. Profit on it amounted to at least 140 points, with which we congratulate everyone. 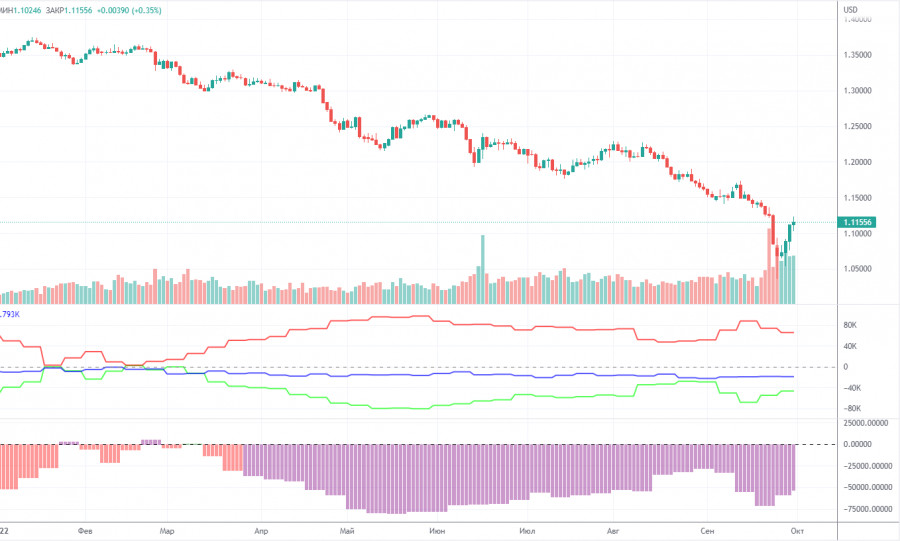 The latest Commitment of Traders (COT) report on the British pound was again very eloquent. During the week, the non-commercial group opened 18,500 long positions and 10,100 short positions. Thus, the net position of non-commercial traders increased by another 8,400, which is quite a lot for the pound. We could assume that the actions of the big players and the pound's movement have finally begun to coincide, only the report is released with a three-day delay and simply does not include the last three days of trading, when the pound showed growth. The net position indicator has been actively falling again in recent weeks, and the mood of the big players remains "pronounced bearish", which is clearly seen in the second indicator in the chart above (purple bars below zero = bearish mood). Now it has begun a new growth, so the British pound can formally count on growth. But, if we recall the situation with the euro, then there are big doubts that based on the COT reports, we can expect a strong growth of the pair. How can you count on it if the market buys the dollar more than the pound? The non-commercial group now has a total of 106,000 shorts and 59,000 longs open. The difference, as we can see, is still large. The euro cannot show growth if the major players are bullish, and the pound will suddenly be able to grow if the mood is bearish? We remain skeptical about the long-term growth of the British currency.

Overview of the EUR/USD pair. October 6. Washington may be behind the Nord Stream bombing.

Overview of the GBP/USD pair. October 6. The Bank of England is finally confused: to stimulate or tighten?

Forecast and trading signals for EUR/USD on October 6. Detailed analysis of the movement of the pair and trading transactions. 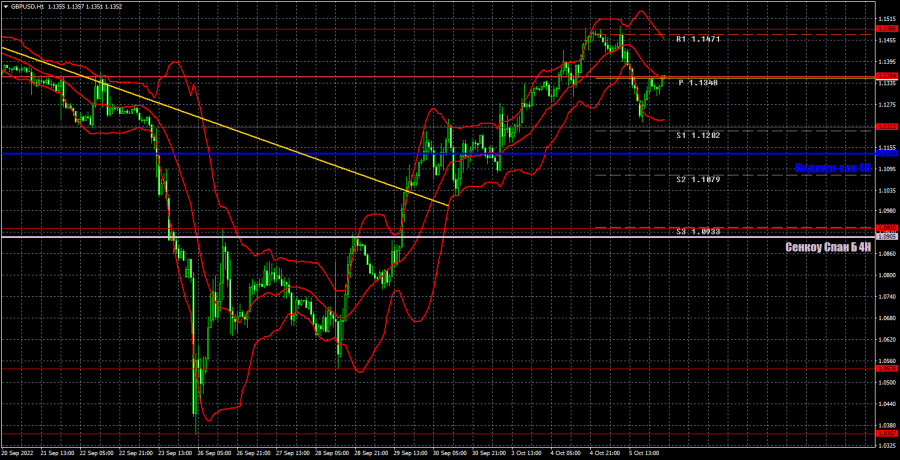 On the hourly timeframe, the pound/dollar pair has rolled back down by 250 points, but maintains a new upward trend. Unfortunately, in the long term, the downward trend may well resume, as the Ichimoku indicator line on the 24-hour time frame is above the price and can provide strong resistance to it. However, the chances that the downtrend is still completed are very high. If geopolitics does not spoil everything, the pound may show growth for many months. For October 6, we highlight the following important levels: 1.0930, 1.1212, 1.1354, 1.1442, 1.1649. Senkou Span B (1.0905) and Kijun-sen (1.1138) lines can also be sources of signals. Signals can be "rebounds" and "breakthroughs" of these levels and lines. The Stop Loss level is recommended to be set to breakeven when the price passes in the right direction by 20 points. Ichimoku indicator lines can move during the day, which should be taken into account when determining trading signals. The chart also contains support and resistance levels that can be used to take profits on trades. Only minor data will be published in the UK and the US on Thursday. UK Construction PMI and US Unemployment Claims. The situation may be similar to yesterday: there will be formal grounds for a certain behavior of the market, but it is far from certain that they will cause a new strong movement.