The report of the US Department of Commerce, which explicitly states that car imports pose a threat to national security, shifts the focus from trade negotiations in Beijing to problems in the eurozone, as it dramatically increases the chances of introducing protective duties on European cars.

Investigation on this issue was initiated by Trump back in May last year, and the findings present a serious problem for foreign manufacturers. If Trump decides to take advantage of the findings and tries to impose a 25% duty on European automakers, the EU's response will not take long to wait, which, on the one hand, will lead to a fall in the euro, on the other, will mean another step in isolating the United States from the rest of the world.

In the next 24 hours, we should expect White House comments on this issue and, as a result, an increase in volatility, since the chosen scenario of reaction to the report will have serious consequences for the dollar.

On Wednesday, the minutes of the January Fed meeting will be published, which will be important in terms of the Fed's plans to further reduce the balance.

On Friday, ECB board member Benoit Coeure gave an extensive commentary on the economic prospects of the eurozone. The keynote at Coeure was the recognition of a stronger and wider slowdown than the ECB had expected, and that the regulator intends to consider the issue of a new round of TLTRO. According to him, he is "not enthusiastic about the rate increase, then to reduce them again", which should be interpreted by the markets quite unequivocally - the policy of the ECB will not be aimed at strengthening the euro.

It was difficult to expect any other assessment from the representative of the ECB if we proceed from the dynamics of market indicators. On Thursday, the February PMI indices will be published, in January, they indicated not even weak growth, but stagnation and the trend are not improving. In any case, we already know about a further decrease in the volume of new orders. 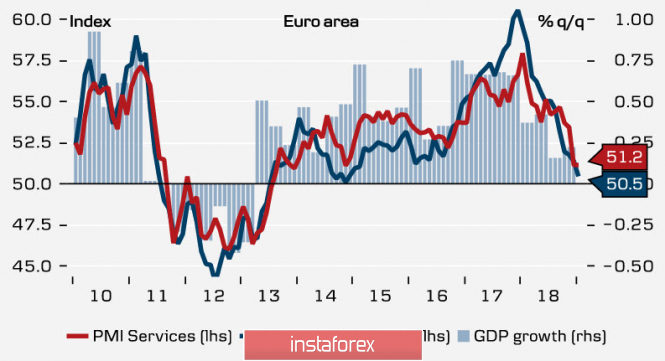 Since Monday is a holiday in the USA, the market dynamics will most likely be low. Growth attempts will be blocked with a high probability in the resistance area of 1.1340, the support will be Friday at least 1.1232. Trade will be conducted in the side range with some aggression towards its lower border.

Retail sales in the UK significantly exceeded forecasts in January, which was a big surprise for experts - growth was 1% with a forecast of 0.2%, year-on-year growth of 4.2% with a forecast of 3.4%. Part of the growth is due to numerous discounts, partly due to the weak results of December. In any case, the pound received little support against the background of continuing uncertainty about Brexit. 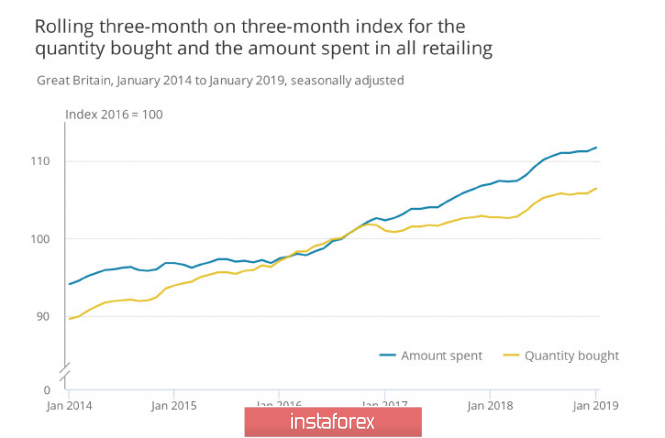 The intrigue regarding the future stay of the UK in the EU gets a long-awaited development. After the next failure of Theresa May in parliament during the voting on the border with Ireland, when she failed to obtain the necessary powers to resolve this issue in negotiations with the EU, it became clear that the possibilities of the May's Cabinet were close to exhaustion. Despite the failure, May continues to insist on a legally binding document on participation in the Customs Union with a clear timeframe, the EU may already be beginning to lean towards a different strategy.

The EU leadership intends to hold talks with Labor leader Jeremy Corbyn, who takes a different position and offers permanent British participation in the Customs Union. If the indicated negotiations allow to work out a unified position, then May's Cabinet will be doomed - it will be much easier for European politicians to wait for May's resignation, early parliamentary elections and the subsequent conclusion of an agreement with the Cabinet, which will be headed by Corbyn, which will completely solve the Brexit problem.

The case seems to be developing in just such a scenario since rumors that part of May's cabinet is ready to resign are becoming more and more insistent if no agreement is reached with the EU before February 27 and ratification is not held.

The pound in the current environment can not determine the direction. May's confident victory could have given him a strong bullish impulse, but it is no longer clear which of the scenarios would be more pragmatic in terms of benefits for the British economy. Deciding on the direction will help publication on Tuesday of the report on the labor market, which will give some understanding of inflationary perspectives, while the most likely is the trade in the side range with some margin in favor of growth. The nearest resistance is 1.2958, then 1.2995, but in the absence of news, this goal is unlikely to be achieved.