Absolutely all macroeconomic indicators in the United States did not come out as expected. Especially orders for durable goods, the volume of which decreased by 0.5%, although they were expected to grow by 0.3%. But the dollar continued to rise anyway. But it was orders that were considered the central news of the day, which will determine the dynamics of the market. Their reduction should have led to a completely different result. It's all about a number of other indicators, which should have remained largely unchanged. However, the number of initial applications for unemployment benefits decreased by 71,000, while the forecast was 6,000.The number of repeated applications, which should have decreased by 39,000, in fact decreased by 60,000, so this is not a symbolic decrease , but quite noticeable, which compensated for the decline in orders for durable goods. In addition, new home sales rose 0.4%. The growth, of course, is not significant, but we expected a decline of 2.0%, and taking this into account, it looks completely different. It turns out that initially they expected just a slight increase in the volume of orders, coupled with the stability of applications for unemployment benefits, and a noticeable decrease in home sales. But there was a definite decrease in orders, combined with an already noticeable decrease in applications and continued growth in home sales. So the data was still rather positive, which was the reason for the further growth of the dollar. 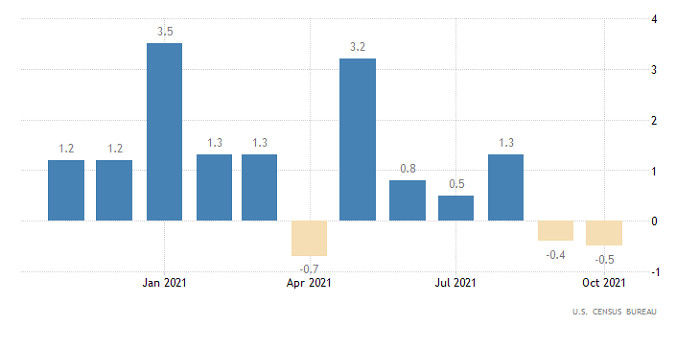 Today, due to a holiday in the United States, on the occasion of Thanksgiving, as well as a completely empty macroeconomic calendar in Europe, the market will stand still.

The GBPUSD pair broke through the support level of 1.3350 in the process of building a downward trend. This move indicates the prevailing interest in short positions among market participants.

The daily chart shows a stepped move that combines momentum and retracement cycles. This is a favorable signal for the mid-term scenario.

The technical instrument RSI in the four-hour and daily periods moves between the 30 and 50 lines, which has a positive effect on the volume of short positions.

It can be assumed that market participants are in the stage of price fiction at new price levels, where a slight stagnation-rollback is possible. The subsequent growth in the volume of short positions is expected at the moment of renewal the previous day's local low - 1.3315.

Comprehensive indicator analysis gives a buy signal based on a short-term period due to a price rollback. Technical instruments in the four-hour and daily timeframes signal a sell-off through a downward cycle. 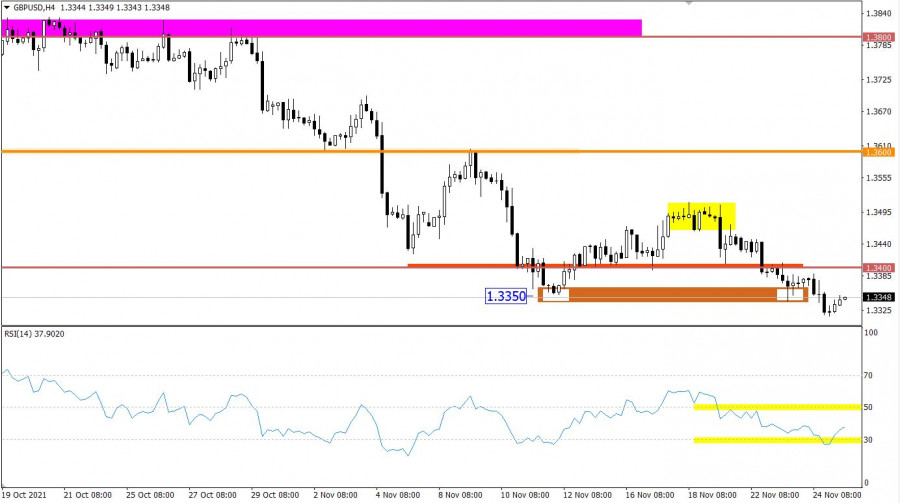 Hot forecast for GBP/USD on 27/01/2023
Although the U.S. economy has slowed down much more than expected, the situation on the currency market has not changed, as market participants...
Breaking forecast for EUR/USD on January 26, 2023
The euro returned to its local high. Today's data from the US is likely to boost it higher.
Hot forecast for GBP/USD on 25/01/2023
Although the U.S. reports turned out to be better than the U.K., the pound is clearly poised for further gains as investors expect the Federal Reserve...
展示更多
Analysis Articles Fundamental Analysis Trading Plan Cryptocurrencies Technical Analysis Breaking Forecast
All Analytics
Breaking Forecast Trading Plan Cryptocurrencies USD/RUB Russian Economy Video Analysis
Trading Instruments
EURUSD GBPUSD USDCHF USDCAD USDJPY AUDUSD EURGBP EURJPY NZDUSD EURNZD Silver Gold #CL #USDX COVID-19 Bitcoin

Unexpectedly, but the euro and the pound sterling traded with the opposite correlation yesterday. Oddly, there were no reasons for this. At least, the macroeconomic statistics could hardly

There is no wonder that the market got stuck amid the absolutely empty macroeconomic calendar. Today, the market is expected to remain stagnant despite the UK labor market reports. According