In light of the recent collapse of FTX and the liquidity scandal, regulators in the European Union have joined other global regulators in pushing for clearer guidelines and regulations for cryptocurrencies.

The European Central Bank (ECB) published a post on November 30 titled "Bitcoin's last stand", which summed up Bitcoin's financial career with current price volatility. However, instead of drawing an objective picture of the cryptocurrency history so far, he only presented its disadvantages.

Written by Ulrich Bindseil and Jurgen Schaaf, director general and advisor to the ECB, the article says the digital currency is "on the road to insignificance." He also claimed that BTC is rarely used for legal transactions, and that the attention from regulators around the world could be "misunderstood as approval." In addition, he warned banks against interacting with the digital currency as it could damage their reputation.

However, where there are libels against crypto from traditional, centralized financial institutions, there are defenders. The crypto community is always ready with answers to bust myths and defend their assets.

The tweet from the ECB itself received hundreds of responses, and the cryptocurrency community verified the claims made in the article and emphasized the origin of its authors.

The Bitcoin bulls bounced above the local trend line resistance and made a new local high at the level of $17,248. The BTC spiked up over 11% already and the next technical resistance is seen at $17,600. The immediate technical support is seen at $16,984 and $16,793. The momentum is strong and positive, but the market conditions are now extremely overbought on the H4 time frame chart. There is no indication of the down trend on Bitcoin to terminate or reverse yet, so the next target for bears is seen at the level of $13,563 (2019 high). 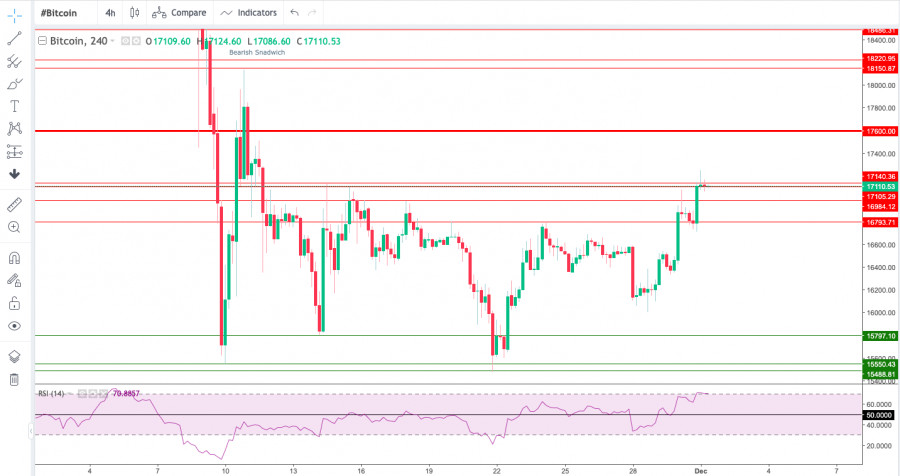