The USD/JPY pair is trading sideways in the short term. The price action developed a potential Head & Shoulders pattern. Still, the formation is far from being confirmed, so it's premature to talk about a larger drop.

Fundamentally, the Japanese economic data came in mixed today. Economy Watchers Sentiment was reported at 48.1 points, Final GDP dropped by 0.2% versus the 0.3% drop expected, Final GDP Price Index dropped only by 0.3% compared to the 0.5% drop estimated, Current Account came in worse than expected at -0.61T, while Bank Lending rose by 2.7% beating the 2.2% growth expected.

On the other hand, the US Unemployment Claims came in at 230K matching expectations above 226K in the previous reporting period. Tomorrow, the PPI, Core PPI, and the Prelim UoM Consumer Sentiment could really shake the markets. 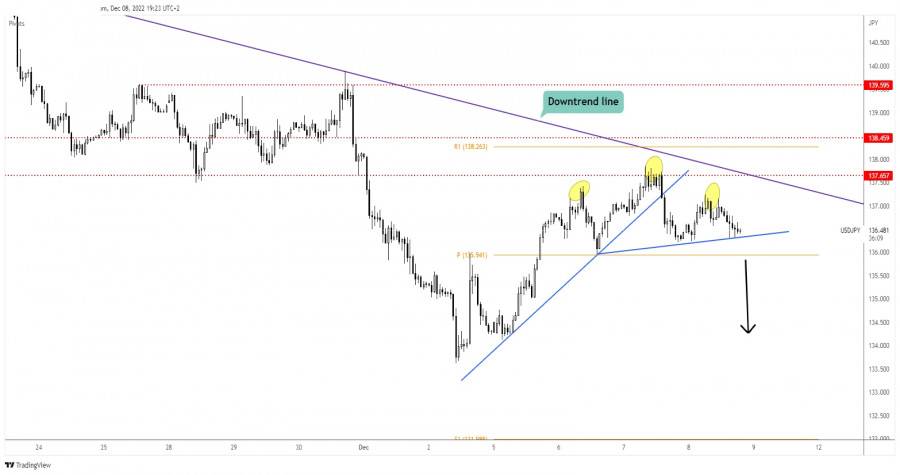 Technically, as long as USD/JPY stays under the downtrend line, the bias remains bearish. 137.65 represents a static resistance. The price action developed a Head & Shoulders. The minor uptrend line represents the neckline while the weekly pivot point of 135.94 stands as critical support.

A new downside movement could be invalidated only by a valid breakout through the downtrend line.

A valid breakdown below the weekly pivot point (135.94) activates the reversal pattern and brings new selling opportunities. This scenario could announce a 164 pips sell-off.

USD/CAD: downside continuation from below 1.3334

The USD/CAD pair dropped and now is trading at 1.3332. It is challenging the 1.3334 former low which represents a downside obstacle. On the other hand, the downtrend line represents

Technical analysis of EUR/USD for January 26, 2023

Euro parity still in play ahead of decisive US inflation data, for that common currency came within whisker of 1.0845 this week. Right now, the EUR/USD pair is still moving

In the European session, XAU/USD reached 1,949.03, the highest level since April 2022. On the 1-hour chart, we can see that this level coincides with the top of the bullish

Forecast for EUR/USD on January 26. Joachim Nagel: ECB rate will continue to rise

Yesterday, the EUR/USD pair reversed in favor of the euro and started a new expansion in the direction of the level of 1.1000 after rebounding from the bottom line

Forecast for GBP/USD on January 26. Bull traders will not easily give up their positions

The GBP/USD pair produced a new reversal in favor of the British and anchored above the level of 1.2342, according to the hourly chart. Thus, the bears do not benefit

XAU/USD crashed after failing to take out the 1,949 former high. Now, it was trading at 1,936 and it seems undecided. The bias remains bullish despite the current drop. Still