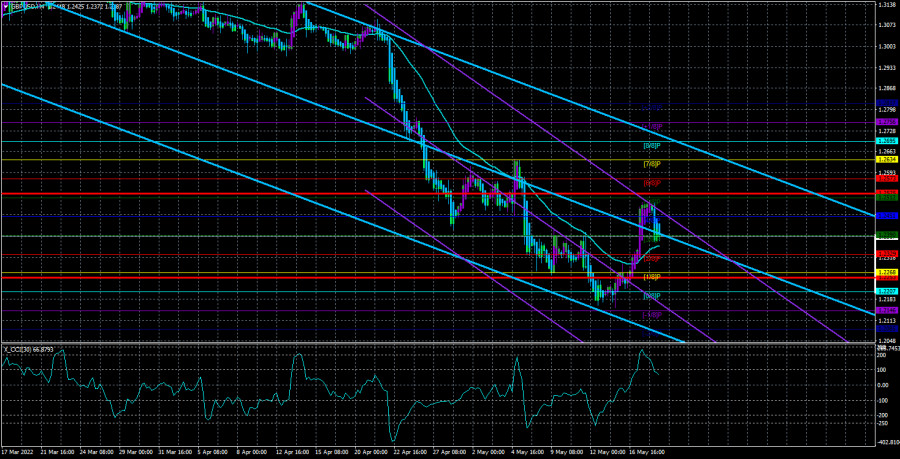 The GBP/USD currency pair began to adjust after rising by 350 points over the previous few days. The pullback was logical, but now the question is as follows: will the growth of the British currency continue or will everything end in a banal pullback again? So far, the correction is so weak (in comparison with the previous fall) that the price has not even reached its previous local maximum near the Murray level of "7/8"-1.2634. That is, the technical pictures of the euro and the pound are very similar now. As it has been similar in recent weeks and months. This gives us reason to assume that now a lot depends on global factors. For example, the actions of the Fed, geopolitics, and market sentiment. And not from local ones, like macroeconomic statistics in the UK or the EU. If two pairs that are united by the dollar, which is the world reserve currency, show almost identical movements, then it is reasonable to assume that either it's all about the dollar itself and the demand for it, or it's all about geopolitics.

And geopolitics remains very complicated. As we have already said, in the coming months or years, the redevelopment of the territory may begin in the Baltic States. Lithuania, Latvia, Poland, and Estonia are asking NATO to increase its military presence on their territory to prevent a possible invasion by Russia. The Russian Federation may come into direct conflict with Finland and Sweden, since they have applied to join the military alliance and, if they are approved, the NATO bases may be located on the very border with Russia, not far from St. Petersburg. That is, the situation around NATO and the Russian Federation is heating up. As we know, "there is no smoke without fire" and if something is brewing somewhere, then most likely it will happen. With the slightest deterioration in the geopolitical situation, both the euro and the pound can forget at once that they planned to form a new upward trend.

What does high inflation mean in Britain?

Yesterday's trading day was interesting to traders only thanks to the UK inflation report. Recall that experts' forecasts predicted an increase of 8.9-9.1% in April. As a result, the actual value was 9.0%. However, this is a lot anyway. Recall also that the maximum inflation in the United States in 40 years was at a peak of 8.5%. It turns out that in Britain it is already higher and who said that its acceleration will end there? This leads to several conclusions. First, four rate hikes by the Bank of England had no effect. The second is that the Bank of England will probably have to raise the rate much more than the Fed. And here the most interesting thing begins. The Fed and the whole of America are already mentally ready to raise the rate to 3%, or even to 3.5%. The regulator believes that it will be possible to avoid a recession. But in Britain, despite the good economic growth figures in the first quarter, they are very much afraid of recession and stagflation. The Bank of England has never made a statement in recent months that it intends to raise the rate further. Or that he's going to bring it to some specific value. Most likely, this means that the British regulator will act slowly.

However, this is not the most interesting thing. The most interesting thing is that the British pound did not react to the four previous rate hikes in any way, so an increase in inflation for it does not mean a new tightening of BA monetary policy, which hypothetically could support the pound. Therefore, yesterday's market reaction to the report (the fall of the pound) should not be considered negative. Days earlier, the pound was getting more expensive, and we do not exclude that the market began to work out the consumer price index in advance, which was almost guaranteed to accelerate by 2% compared to March. Based on this analysis, we believe that neither high inflation nor a new rate hike by the Bank of England will be able to dramatically affect the mood of the market. If the market is already set up for purchases and geopolitics does not worsen, then the pound may show restrained growth for several weeks or months. But this growth will be very fragile, and with the slightest negative news - and the pound can resume its "steep peak". 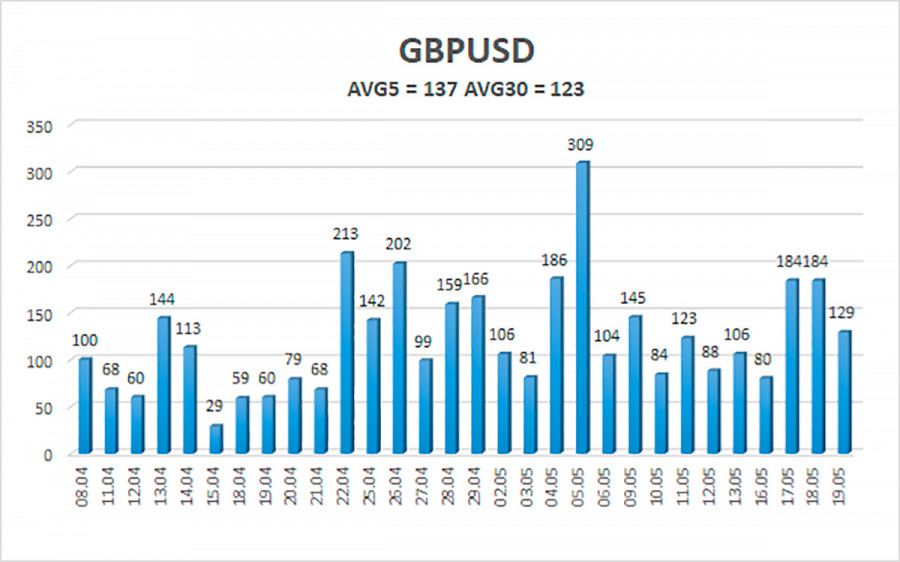 The average volatility of the GBP/USD pair over the last 5 trading days is 137 points. For the pound/dollar pair, this value is "high". On Thursday, May 19, thus, we expect movement inside the channel, limited by the levels of 1.2253 and 1.2525. A reversal of the Heiken Ashi indicator upwards will signal a possible resumption of the upward movement.

The GBP/USD pair has started forming a new upward trend in the 4-hour timeframe. Thus, at this time, new buy orders should be opened with targets of 1.2512 and 1.2525 in the event of a reversal of the Heiken Ashi indicator upward. It will be possible to consider short positions if the price is fixed below the moving average line with targets of 1.2268 and 1.2253.