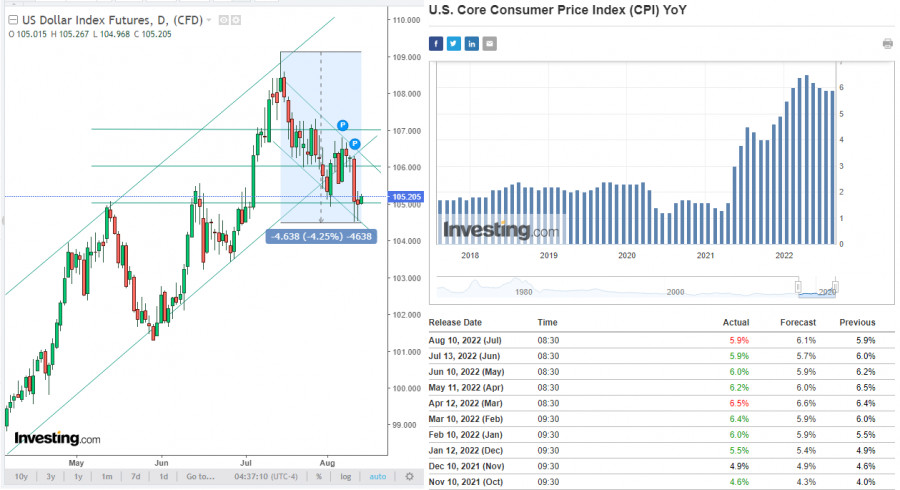 Having fallen last Wednesday to an intraweek low of 104.52, also corresponding to the levels of early July, the dollar index (DXY) today is trying to recover and has been growing since the opening of today's trading day. It is worth noting that on Thursday, sellers of the dollar again made an attempt to push it down, and the reason was the publication at 12:30 (GMT) of a block of macro data on the US, which once again alerted investors.

As follows from the report of the US Bureau of Labor Statistics, the annual producer price index (PPI) in the US in July fell more than expected, to 9.8% from 11.3% in June, which was also below market expectations of 10.4%. The annual core PPI also fell to 7.6% in July from 8.2% a month earlier, in line with market expectations.

Without going into details, we also note that other points of yesterday's weekly report of the Department of Labor also turned out to be worse than market expectations.

On the aforementioned data published on Thursday, the DXY index made a new attempt to break through the local support level of 104.50, dropping to 104.52.

Nevertheless, so far this level is holding, and today DXY is growing, albeit modestly.

As of this writing, DXY futures are trading near 105.20, 20 pips above Thursday's closing price. 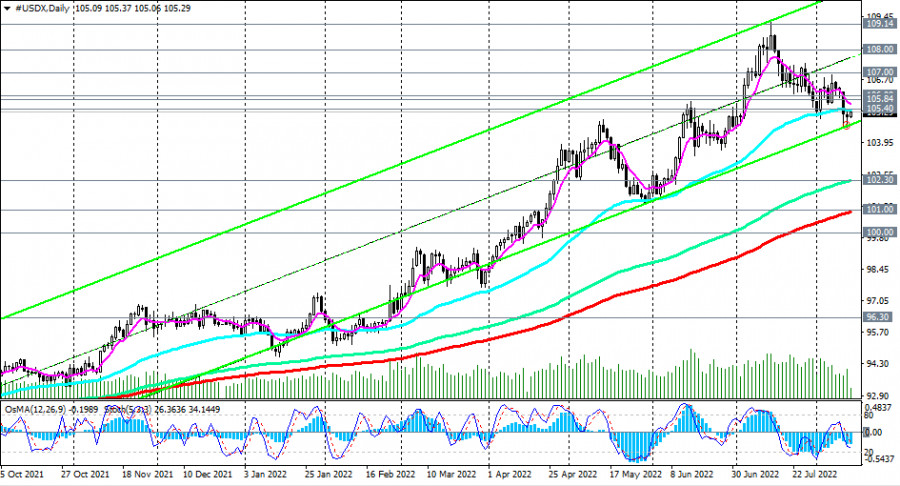 The dollar may receive some support today from the publication (at 14:00 GMT) of the preliminary consumer confidence index of the University of Michigan. This index is a leading indicator of consumer spending, which accounts for most of the total economic activity. It also reflects the confidence of American consumers in the economic development of the country. Previous values of the indicator: 51,5, 50,0, 58,4, 65,2, 59,4, 62,8, 67,2 in January 2022. The forecast for August is 52.5. The growth of the indicator will strengthen the USD. Volatility may also be caused by one of the components of this report—the index of long-term inflation expectations. Its growth together with the overall positive consumer confidence index may cause the dollar to strengthen.

In this case, the breakdown of the local resistance level of 106.00 will be the first signal of the resumption of the positive dynamics of the dollar and its DXY index (reflected as CFD #USDX in the MT4 trading terminal).

The statements of other Fed officials earlier this week also indicate that they are determined to continue the accelerated cycle of interest rate hikes since it is too early to declare a "victory over inflation," which remains "unacceptably" high.