This week, the New Zealand dollar received substantial support from the Reserve Bank of New Zealand: the central bank fully justified the hawkish hopes of most experts by raising the interest rate by 75 basis points. And although the central bank implemented the base scenario, the kiwi still showed increased volatility. For instance, the NZD/USD pair updated its multi-week high to 0.6282. But in this case we cannot be sure about the success of the uptrend - the "dark horse" here is the greenback, which can significantly strengthen its positions ahead of the December FOMC meeting. That's why it is best to "monetize" the results of the RBNZ's November meeting with the help of cross-pairs that have the kiwi in it. And, in my opinion, the best option here is the AUD/NZD cross. 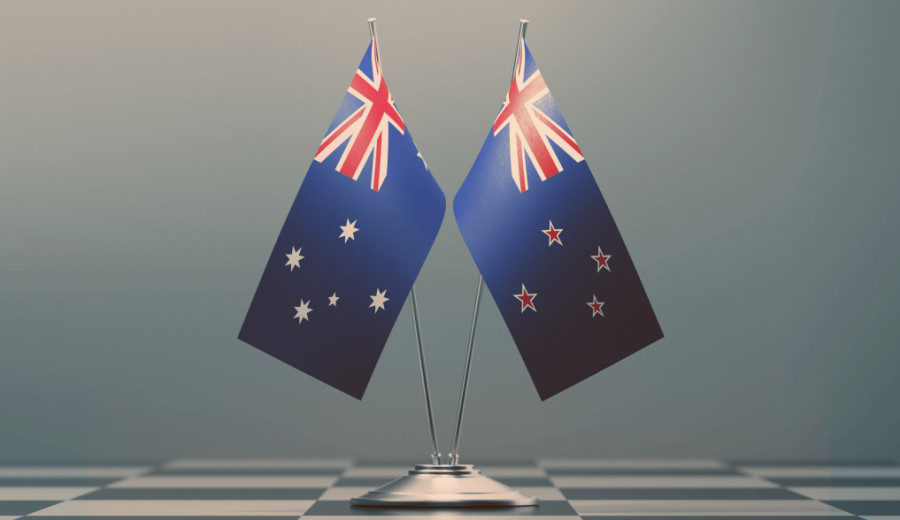 Take a look at the weekly chart of this pair. The price has been falling steadily and consistently (though with corrective pullbacks) for the second month in a row, since early October. This means that we are dealing with a noticeable downtrend, which has a rather strong fundamental basis. It is expressed primarily (and mostly) in how the rates of the RBNZ and Reserve Bank of Australia are uncorrelated.

The RBA slowed the pace of tightening back in September, complaining about the side effects of aggressive policy. And recently the RBA has been giving signals about a possible pause in the first half of next year. And although these signals are only heard in the list of hypothetical options, the market is still cautious. In my opinion, it is quite reasonable.

Let's look back on the minutes of the last RBA meeting. The text of this document indicates that the central bank has no predetermined trajectory for the rate hike. Members of the central bank do not exclude two options: 1) a return to a 50 bps hike (the central bank is currently raising the rate in 25 bps); and 2) a suspension of monetary policy tightening.

In my opinion, the Australian central bank will continue to raise the rate by 25 bps at the next meetings, but will end the current cycle of monetary tightening at a lower level relative to the RBNZ.

The OCR rate is currently at a 14-year high (4.25%, RBA at 2.85%), with the New Zealand central bank still stating that "there is still a lot to do" as inflation remains at unacceptably high levels.

At the previous (October) RBNZ meeting, the central bank raised the rate by 50 bps, as it did at the previous four meetings. However, at the final press conference, RBNZ Governor Adrian Orr admitted that 75 bps was among the options under consideration. At that time, the central bank was hesitant to accelerate monetary tightening, but the inflation data released a little later gave the RBNZ members determination in November. As a reminder, inflation in New Zealand soared again in the third quarter, well above forecast levels. The consumer price index rose 2.2% in quarterly terms (against a forecast of 1.5%) and jumped to 7.2% year over year, against a forecast of a slowdown to 6.5%.

Given the inflation trends, as well as Orr's hawkish rhetoric, we can assume that the monetary policy tightening will continue to slow down next year. For example, currency strategists at the UOB have revised their earlier forecasts and moved the current cycle ceiling to 5.5%. In their view, the RBNZ will reach this target in the third quarter of 2023, after which the process of monetary policy tightening will be paused, followed by a rate cut in 2024.

The RBA, for its part, is relaying softer language, while not ruling out dovish decisions. For example, at the end of its last meeting, RBA Governor Philip Lowe said that members of the central bank "considered it appropriate to raise rates at a slower pace." At the same time, he noted that the members discussed the implications and costs of not raising rates, since the central bank "takes into account the pressures of higher rates and inflation on household budgets." Thus, Lowe allowed a pause in the process of tightening monetary policy.

Thus, the current fundamental background contributes to the further decline of the AUD/NZD cross-pair. The bearish scenario is also evidenced by the technical picture: the pair is between the middle and bottom lines of the Bollinger Bands indicator on the daily chart, as well as under all the lines of the Ichimoku indicator, which shows a bearish Parade of Lines signal. It is better to use any corrective surges to open short positions to the first support level of 1.0750 (the bottom line of the Bollinger Bands indicator on the daily chart). The main bearish target is 1.0700 (lower limit of the Kumo cloud on the one-week timeframe).