Forex Analysis & Reviews: GBP/USD. Analysis for the trading week of November 21-25. COT report. The decision of the British Supreme Court supported the pound. 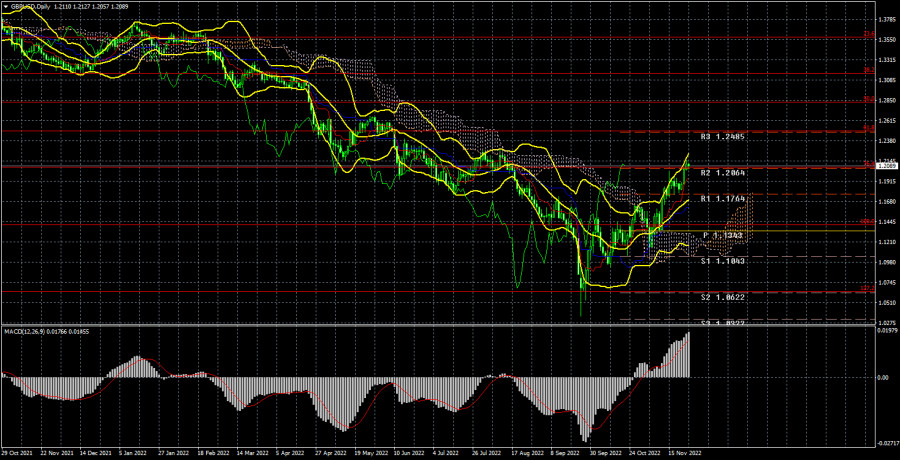 During the most recent week, the GBP/USD currency pair rose by 200 points. The pound had good reasons for this recently and this week, so the upward movement continues. The British pound was the first currency to demonstrate a sharp and significant break from its absolute lows, which can be viewed as the end of a long-term downward trend. Even though we believe that this departure was somewhat accidental, it still happened. Second, the cancellation of Liz Truss' initiatives to lower taxes has caused the British pound to increase. With the election of Rishi Sunak, a serious financial and economics expert, the economy will unquestionably feel better than it did under Truss. Third, Scotland was denied permission this week by the Supreme Court of Great Britain to hold an independence referendum without London's consent. Given that the court is British, the outcome was anticipated. However, there won't be a valid referendum anytime soon, and the Kingdom won't lose a third of its territory.

All of this news and events support the British pound. It should also affect the pound, given that the Bank of England has already increased its rate eight times in a row. Additionally, after nearly two years of the pair falling, it is possible to observe a very likely decrease in the Fed rate's growth rate or the same banal technical rollback. In general, the pound has many more reasons to increase in value than the euro does, even though there are also enough reasons for it not to.

Technically, on the 24-hour TF, the price is above all of the Ichimoku indicator's lines, and on the 4-hour TF, all indicators point upwards. What might cause the pound to fall again is currently unknown. The pair has grown too quickly and sharply in recent weeks, so we were expecting a downward correction this week. However, it has yet to start in any way.

The "bearish" sentiment continued to weaken, according to the most recent COT report on the British pound. The Non-commercial group closed 1,900 buy contracts and 8,800 sell contracts for the week. As a result, non-commercial traders' net position increased by 7,000. The net position indicator has been gradually increasing over the past few months. However, the major players' outlook is still "bearish," and despite the pound sterling's recent rise, it is not yet clear that it is getting ready for a protracted upward trend. And if we think back to the situation with the euro, there are serious questions about whether we can generally anticipate a strong increase in the pair's value based on COT reports.

Demand for US dollars is still very high, and the market is only waiting for new geopolitical shocks to rekindle interest in buying dollars. The non-commercial group has opened a total of 67 thousand sales contracts and 34 thousand purchase contracts. As we can see, the difference is still very significant. Remember that despite the "bullish" outlook of the major players, the euro cannot demonstrate strong growth. The bulls currently have a 17 thousand advantage in terms of the total number of open buy and sell orders. However, as we can see, this indicator also does little to support the pound. Although there are still technical reasons to doubt the British pound's long-term growth, we still have doubts.

In the UK this week, business activity indices were released, but nobody cared about them. There was nothing to react to because two of the three indices did not change from the previous month. The past week was generally mediocre in the USA. Only on Wednesday did traders have access to several relatively significant reports. All three business activity indices fell in November after declining in October. However, orders for durable goods and sales of new homes turned out to be stronger simultaneously. Unfortunately, the market was more interested in the news from the Supreme Court of Great Britain than these secondary reports. Thursday and Friday had absolutely nothing of interest. A rather dull week where the pound was the only growth driver.

Trading plan for the week of November 28 – December 2:

1) The pound/dollar pair is located above all of the Ichimoku indicator's key lines, giving it the technical support it needs to start a new long-term upward trend for the week of November 28 to December 2. The closest targets are 1.2080 and 1.2824, with 1.2080 already being reached. We continue to think that a downward correction is required, and that correction will show up on the 4-hour TF. However, for this to happen, the pair must at least drop below the moving average on the 4-hour chart.

2) The pound sterling is still forming what appears to be a new upward trend. It now has solid grounds for growth, but it has gained nearly 1800 points in just two months. Will traders still be motivated enough to buy after this? The pair's decline may resume with targets in the range of 1.0632 to 1.0357 if the price fixes back below the Kijun-sen line. Sales, though, are no longer important.

Price levels of support and resistance (resistance /support), Fibonacci levels – targets when opening purchases or sales. Take Profit levels can be placed near them.