Bitcoin remains under pressure, drawing a suspiciously bearish flag pattern. If this figure works out, the level near $14,000 will not hold the price. It is worth noting that the previous drop when this pattern formed was from $20,000 to $16,000. 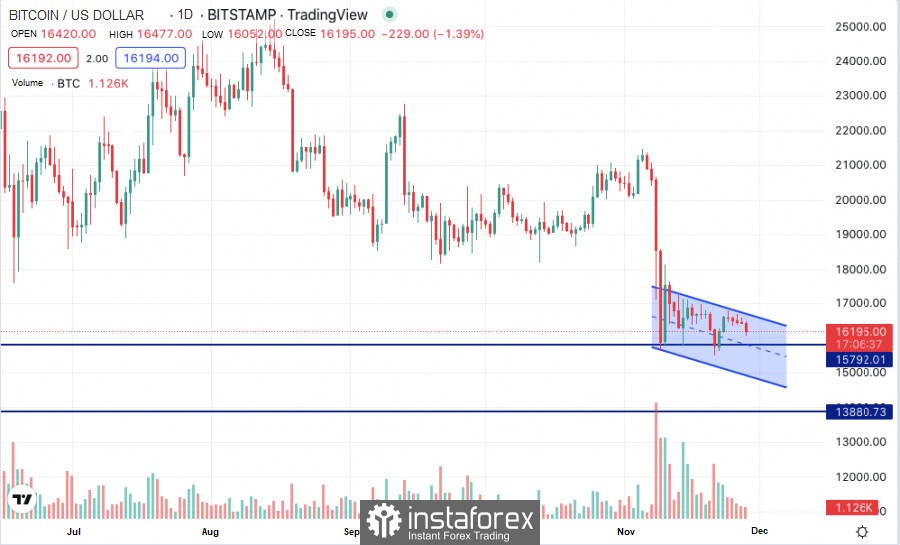 Nevertheless, someone is using the current values to buy, while supporters of the main cryptocurrency urge not to throw the baby out with the bath water.

Hedge fund veteran Tom Lee remains long-term bullish on Bitcoin and expects the crypto industry to come out of its bear market stronger than before.

In a new interview with CNBC, the Fundstrat managing partner said that while 2022 was a "terrible" year for crypto investors, he believes the market could have a new chapter.

"Nobody has made money in crypto in 2022, but it's not that different than 2018. If we look back at that crypto winter when Bitcoin went from $17,000 to something like [$3,200] or so, that was the time that some of the best projects were created. So I think that it's an important moment for the industry. I think it is cleansing a lot of bad players, and I think it's important.

Do I think crypto is dead? No, I think there are a lot of people throwing gasoline in a crowded theater and yelling 'Fire!,' and it's just going to be important for those who really like what decentralization and what Bitcoin are doing. They need to have the staying power, but yeah, 2022 has been terrible."

Lee compares today's crypto space to the traditional financial sector in 2008, when many firms collapsed during the crisis before making way for stronger organizations.

"We first read about Bitcoin in 2017, and we recommended people put 1% of their funds into Bitcoin at the time when Bitcoin was under $1,000. That holding today would be 40% of their portfolio without rebalancing."

Tom Lee wondered if the industry was in for another terrible year. If there is more fraud, then yes. But if the events with FTX were just a moment of financial stress, then really strong projects can come out of it.

Meanwhile, data from the online analytics portal Glassnode shows that the number of BTC holders with a position size of 0.1 to 10 has surpassed its historical values and reached new highs.

The smallest bitcoin holders currently control about 6.3% of the total cryptocurrency in circulation.

Meanwhile, Bitcoin crabs, holders holding up to 10 BTC, have also recorded a significant balance increase of around 191,600 coins over the past month. It also turned out to be an unprecedented growth.

In contrast, Bitcoin whales actually unload their positions. Over the past 30 days, whales have released about 6,500 coins to crypto trading platforms. That being said, it should be noted that this is a drop in the ocean compared to their total holdings of 6.3 million coins.

Based on data from Glassnode, we can conclude that the average retail investor is likely to remain optimistic about crypto, with smaller holders taking advantage of the dip to build positions.

Bitcoin millionaires are reducing the amount of assets

At the same time, it is worth paying attention to the fact that Bitcoin millionaires are becoming an increasingly rare breed on the market. Their number is falling by 80% per year.

According to the latest figures from Glassnode, there are currently only 23,000 wallets with a BTC balance of $1 million or more.

The number of such addresses has fallen, correlated with the collapse in the spot price, subject to modest selling by owners at various points in the year-long bear market.

The number of millionaire wallets has declined by about 79% during this period, while the maximum drawdown of BTCUSD this month was 77%.

BTC update for January 30,.2023 - Breakout of the trading range to the upside

Technical analysis: BTC/USD has been trading upside as I expected and the price did breakout of the trading range, which is good sign for the further rise. Trading recommendation