Forex Analysis & Reviews: How to trade EUR/USD on November 29, 2022. Simple trading tips and analysis for beginners 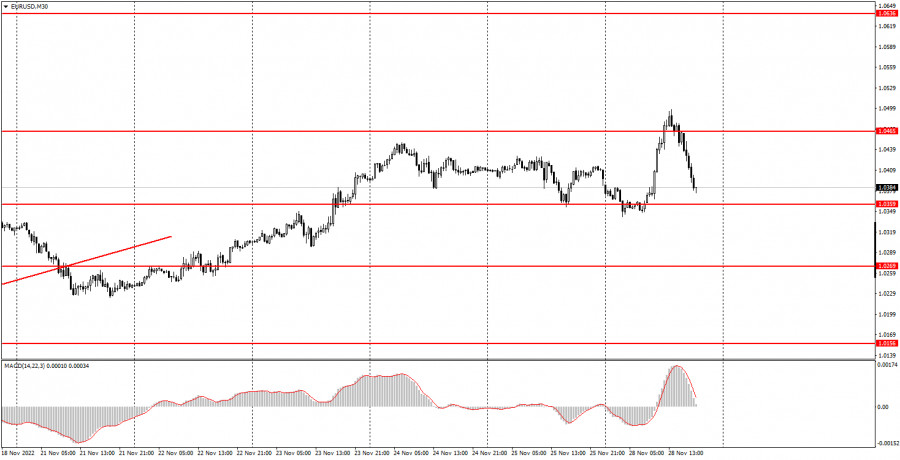 The EUR/USD trade went through many sudden changes on Monday. It sharply grew in the morning, and suddenly dropped in the afternoon. By the end of the day the pair was right where it started. It is difficult to say what triggered such strikingly different movements, because there were not a lot of fundamental or macroeconomic events. Actually, the only event that stood out was the speech of European Central Bank President Christine Lagarde, but she gave a speech just a couple of hours ago, so it couldn't have been related to the morning and afternoon movement. Moreover, the GBP/USD pair did not show any movement today, i.e. the euro was the only one that was trading volatile and in a trend, which is also very strange. Back to Lagarde's speech, she said, as well as other representatives of the ECB's monetary committee earlier, that the rate will continue to rise and the central bank will continue to struggle with high inflation. Absolutely predictable words. The euro was able to renew its latest local high today, so technically it even restored the uptrend, but it immediately fell by 110 points. The technical picture remains complicated and confusing. 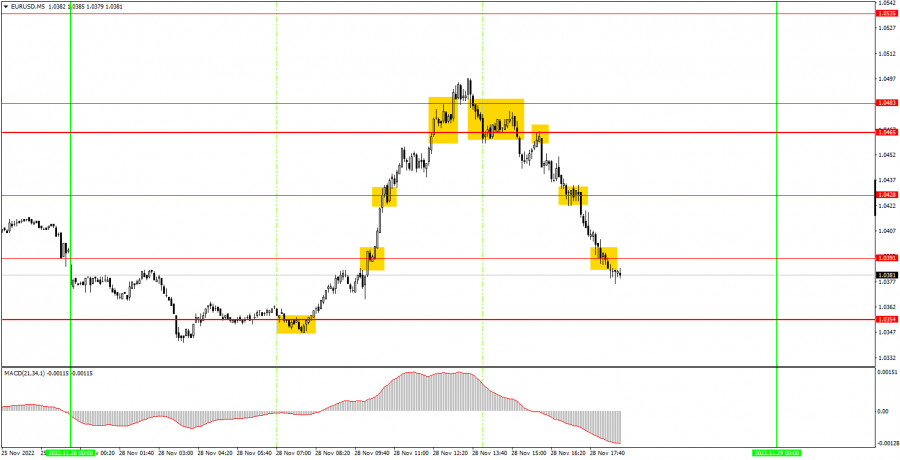 There were a lot of signals on the 5-minute chart. Since there was a trend and it was quite strong, it is not surprising that almost all of the signals were accurate and profitable. However, novice traders could open only two trades. At the beginning of the day the price bounced from the level of 1.0354 and it was not entirely accurate, after that it crossed 1.0391, 1.0428, 1.0465, 1.0483. After settling below the level of 1.0465, traders could close long positions and open short ones. The profit was about 90 pips. The shorts also turned out to be profitable. In the evening, the price fell below the level of 1.0391, where the short should have been closed manually. The profit amounted to 70 points. Thus, traders managed to earn about 160 points on an "empty" Monday. An excellent result.

The uptrend has been canceled on the 30-minute time frame, but it may resurface. The pair is gravitating towards growth, but there is no ascending trend line anymore. We witnessed both strong growth and a strong fall. In my opinion, the technical picture is very confusing. On the 5-minute chart on Tuesday, it is recommended to trade at the levels of 1.0156, 1.0221, 1.0269-1.0277, 1.0354, 1.0391, 1.0428, 1.0465, 1.0483, 1.0535. As soon as the price passes 15 pips in the right direction, you should set a Stop Loss to breakeven. There are no important reports or events in the EU or the US on Tuesday. However, there were none on Monday as well but the pair still moved in a distinct manner. Therefore, we might see something similar on Tuesday. Or at least be prepared for such developments.