The events of November finally plunged the market into an abyss of fear and mass capitulations. According to a report by Glassnode, whales sold more BTC and ETH coins in November. A similar position was taken by miners because of the enormous losses.

Despite this, investors continue to believe in cryptocurrencies and actively increase their investments. Analysts at Santiment note that euphoric moods have peaked in the last three months.

First of all, this can be seen in the "shrimp" (> 1 BTC), which are actively buying out the current price drop. For the first time in the past two months, wallets with balances up to 100,000 BTC have joined them. It is also reported that the ETH network has set a staking record for the main altcoin in the region of 15.39 million ETH.

Ethereum, like the entire market, is heavily dependent on Bitcoin at the current stage, and therefore the movement patterns are almost identical. During the current trading week, the market cooled down and moved to the phase of active accumulation. This allowed the market to move to the stage of recovery movement. 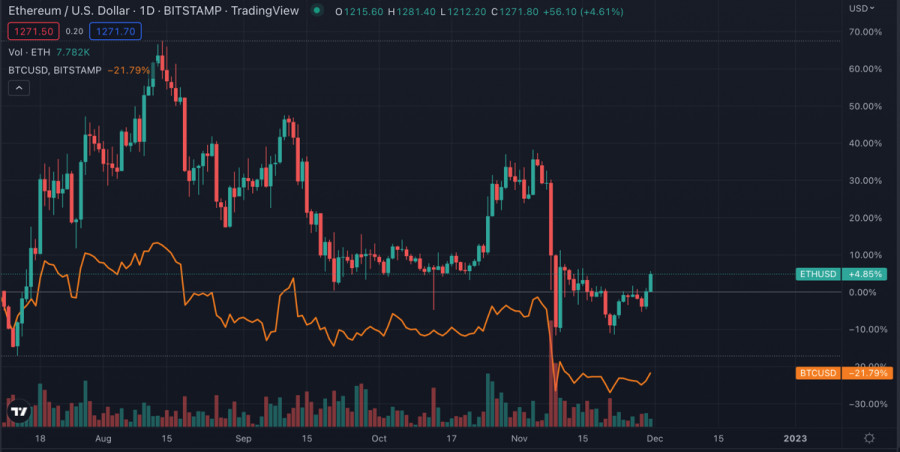 Ethereum has become one of the coins that has benefited the most from the current recovery movement. The asset has risen in price by 9.5% over the past seven days, and the daily gain was 5.5%. The upward movement is also accompanied by an increase in on-chain metrics activity.

Ethereum has come close to the upper border of the "triangle," within which the altcoin has been trading since the beginning of November . The cryptocurrency formed the second confident green candle in a row and consolidated above $1,250.

Technical indicators on the daily chart indicate that the altcoin's upward trend continues. The RSI index continues to rise, which indicates the superiority of buyers and the development of bullish momentum.

The Stochastic Oscillator and MACD have formed a bullish crossover and are moving in an upward direction. The identical movement of the two indicators indicates the formation of a short-term upward trend with gradually increasing trading volumes.

Ethereum on-chain metrics do not show such an iron bullish trend as technical indicators. The formation of upward dynamics is observed only in the indicator of the number of unique addresses in the ETH network. For further growth of ETH/USD quotes, the volume of daily trading should also increase beyond this indicator. 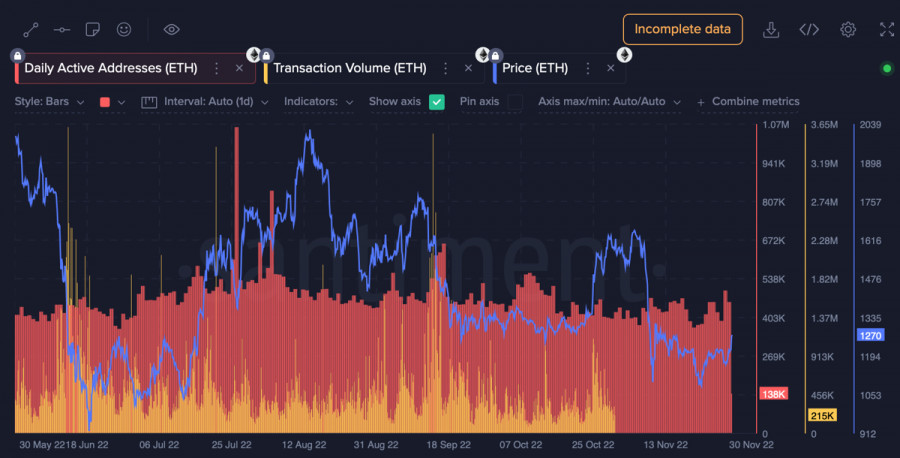 There is an active accumulation of cryptocurrency by large investors with wallets up to 100,000 ETH. At the same time, "shrimps" and "sharks" continue to sell their stocks or remain neutral. As of writing, on-chain activity does not confirm the strength of technical metrics, which may prevent the final assault on the upper border of the $1,080–$1,300 channel.

Ethereum follows Bitcoin and actively develops a recovery movement. To begin the implementation of a short-term bullish movement, the altcoin needs to gain a foothold above $1,300. As of writing, ETH hit $1,270 and faced bearish resistance. 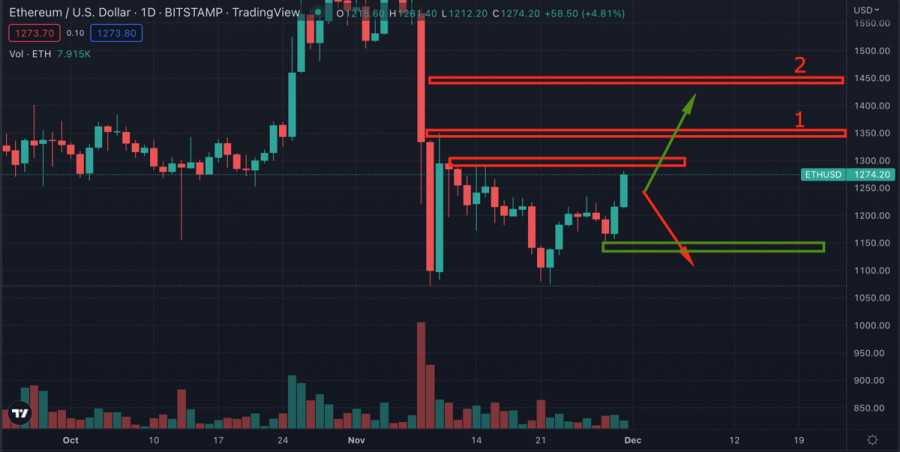 The asset retains chances to continue its bullish movement, and in case of consolidation above $1,300, ETH may reach the level of $1,350–$1,450. However, in case the storm of the $1,300 level is unsuccessful and the price falls below the level of $1,150, the bullish idea is cancelled.