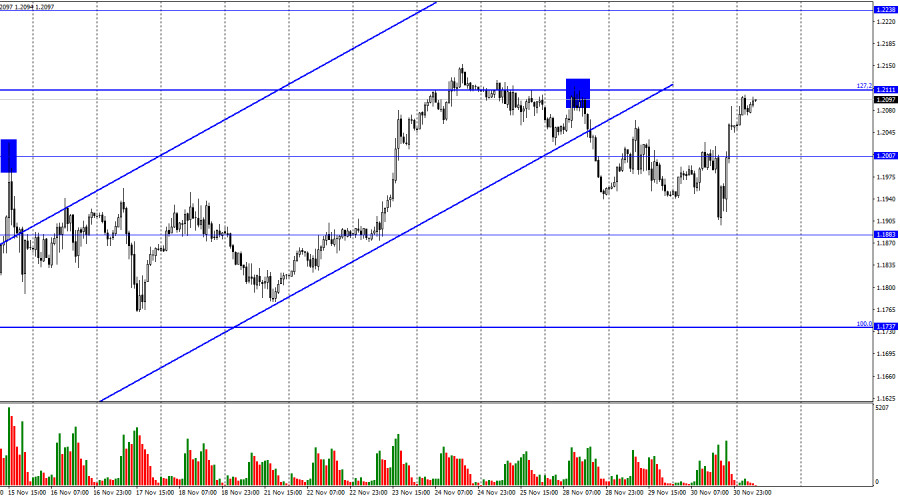 On Wednesday, the GBP/USD pair reversed and started to grow on the hourly chart. At the moment, the British pound approached and fixed above the correctional level of 127.2% - 1.2111. Thus, the price may reach 1.2238 despite the fact that earlier it closed below the ascending trading range.

Yesterday, Jerome Powell's speech in Washington was a key event. The Fed chairman made several very important comments. First of all, he said that the Fed would start to reduce the rate of monetary policy tightening already in December. The second point is that the interest rate cap could be higher than it was estimated in September. The third statement was that a restrictive policy would take some time to implement. All these remarks have been familiar to traders for a long time. Thus, the fall of the US currency surprised but at the same time, traders were just waiting for any important event as a pretext to resume the purchases. What drives them is impossible to say for sure, we just have to accept the facts.

Now it is better to use the trading channel on the 4-hour chart as the most important reference point. It confirms traders' bullish sentiment. Notably, the COT reports continue to indicate bearish sentiment. On the hourly chart, the quotes closed below the trading range a few days ago. At the same time, these factors are not important right now, so let's keep a close eye on the trading range on the 4-hour chart. There will be a lot of important reports this week, so the US dollar may show growth today or tomorrow.

On the 4-hour chart, the pair reversed in favor of the British currency and fixed above the level of 1.2008. The pair may grow towards the Fibo level of 127.2% - 1.2250. The bullish divergence has helped to resume growth, and the trading channel still points to the traders' bullish sentiment. 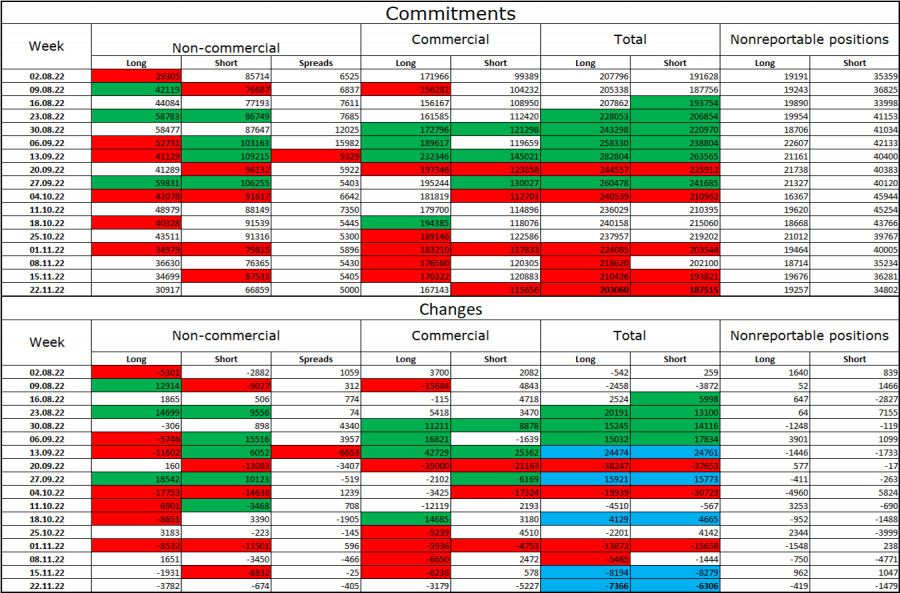 Last week, sentiment of non-commercial traders became less bearish. The number of speculators' long positions decreased by 3,782, and the number of short positions dropped by 674. However, sentiment of big players remains bearish, and the number of short positions is still very much higher than the number of long ones. Thus, big players continue to remain bearish on the British pound for the most part but their sentiment has been gradually changing towards bullish in recent months. At the same time, this process may take a lot of time. It has been going on for months, and the number of sales is still twice as high. The British currency might continue rising because the graphical analysis and the trading channel on the 4-hour chart support this scenario. Considering the information background, the situation is ambiguous. The growth factors for the US dollar are also may appear. Nevertheless, now we see the price increasing and this growth was expected for many months. Meanwhile, this surge has no solid grounds.

US and UK economic calendar:

The US and UK economic calendars have three important events on Thursday. The most important is the ISM Manufacturing PMI. The influence of the information background on the market may be moderate.

One may sell the British pound with a target of 1.1883 if the price reverses to the downside near 1.2111 on the hourly chart. Now it would be better to refrain from buying GBP, as a new decline is possible in the coming days.