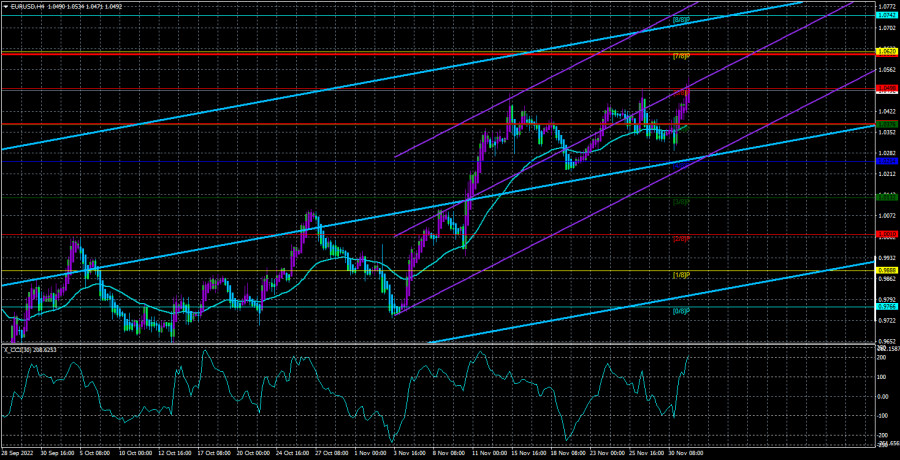 We have already stated in our daily trading recommendations that the current movements are illogical and torn. This is on the hourly TF or lower. But things still need to be better at the 4H-TF. The current issue is that, despite everything in the information sphere, the dollar continues to decline for some reason. The market perceives any news or report as a new call to abandon the US dollar. For instance, on Wednesday night, the US dollar dropped by 150 points. Such a decline would make sense if Powell abruptly declared that there would be no more rate increases in the US and that fighting inflation was no longer necessary. If today's Nonfarm showed a negative value, such a decline would be expected. However, Powell's speech, which we all heard (or read in its entirety), made it clear that there was no justification for doing away with US currency. The reason the dollar kept declining even on Thursday is typically a mystery. Powell's performance will be discussed in more detail below, but let's discuss the technique.

The upward trend has been maintained because the euro/dollar pair held above the moving average line. As we previously stated, a consolidation 20 points below the moving average cannot be regarded as a confident sell signal. Please, we witnessed it firsthand yesterday. In a few hours, the price easily returned to the region above the moving average and reached the Murray level of "6/8" at 1.0498. Even though we have been waiting for a real downward correction for almost two weeks, given how the pair has been moving in recent weeks, we wouldn't be surprised if this unfounded growth continues. But what can you do if investors sell the dollar regardless of the circumstances?

Powell's remarks were of no interest to the market.

In addition to Powell's speech on Wednesday, the third quarter GDP report was also released. Although we stated that it always comes out in three estimates, allowing market participants to know what to expect from each subsequent publication, the indicator has become much stronger than anticipated this time. What did we see, then? 50 points of US currency growth, then a 150-point decline?

Let us go back to the Federal Reserve Chairman's speech. Every single one of Powell's theses was previously known to the market. Any Fed monetary committee member who knew about them did not keep it a secret. James Bullard, Mary Daly, and other committee members consequently raised them. However, the market determined that while Bullard's remarks were uninteresting, Powell's comments on the same topic were worthwhile. As a result, the dollar fell once more in a circumstance where it could have been prevented.

What did Powell essentially say? Will December see a decline in the rate? It's not news. Will the Fed require a significant amount of time where rates remain high? Additionally, this is not breaking news, and I believe this thesis to be more of a "hawkish" factor. If so, will the peak rate level — anticipated to be reached in the year's first half — be higher than expected? So, this is another "hawkish" aspect! Additionally, the market has long been aware of it. Because of this, we have two "hawkish" statements and one "dovish" statement (which is a stretch), but the US dollar crashed to the ground like a mowed lawn. Therefore, expecting the market to respond logically to what is happening right now is absurd.

The current market is just obligated to operate non-farm as it should. We are considering all the absurdities of the previous two or three weeks. If the value of the labor market report is completely normal today, but the dollar is falling, we will only be able to look at the macroeconomic background sometime soon. Instead, we will only be able to trade on technology every day. Recall that the average number of new jobs is between 200 and 300 thousand. Less - the decline of the dollar will appear reasonable. 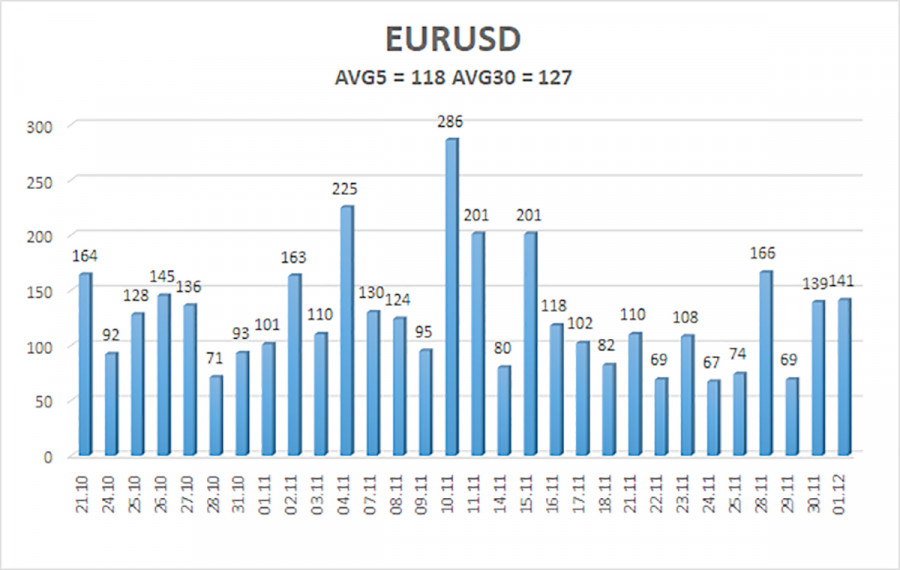 As of December 2, the euro/dollar currency pair's average volatility over the previous five trading days was 118 points, considered "high." As a result, we anticipate that the pair will fluctuate on Friday between 1.0378 and 1.0612. The Heiken Ashi indicator's turning downward indicates a new phase of the corrective movement.

The EUR/USD pair is attempting to resume its uptrend. As a result, until the Heiken Ashi indicator turns down, it is necessary to hold long positions with a target of 1.0620. No earlier than the price fixing below the moving average line with a target of 1.0254 will sales become significant.