Forex Analysis & Reviews: EUR/USD. Analysis of the trading week of November 28–December 2. COT report. How did the euro currency end the week? 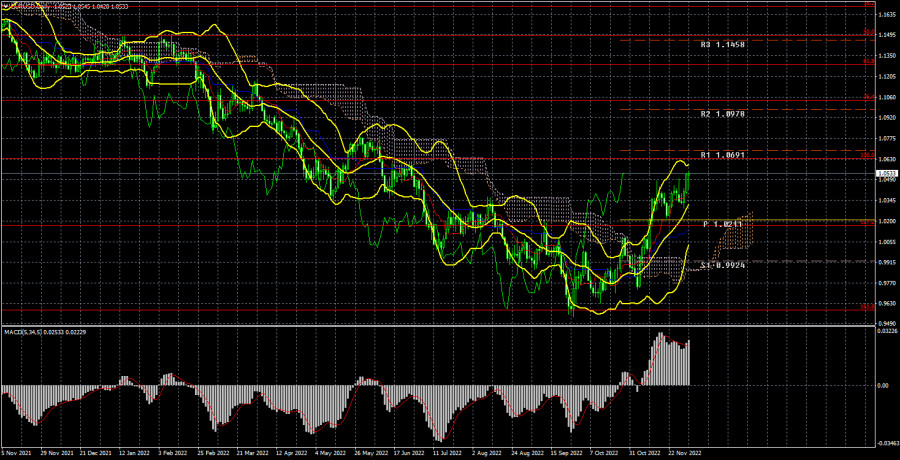 The EUR/USD currency pair has been trading higher again this week, adding approximately 150 points. Given that we have been waiting for the end of the two-year global downward trend for a long time, it does not appear to be too much. But first, let's address all of this week's paradoxes. Almost every day during this time, we discussed how the growth of the European currency was completely illogical and unreasonable. Generally, the pair increased only on Wednesday, Thursday, and Friday. What's all the fuss about these days?

On Wednesday evening, Jerome Powell delivered a speech. Powell's speech is not a Nonfarm or a Central Bank meeting, to which the market always reacts. The Fed's chairman speaks frequently, and other members of the monetary committee speak as well, making it difficult to surprise the market with regular monetary policy statements. And, on Wednesday, the Fed's chairman said nothing new to traders that they didn't already know. Nonetheless, the US currency began to fall again, as if Powell had stated that the Fed rate would not be raised further.

On Thursday, when the only important report of the day was the US ISM index for the manufacturing sector, the dollar fell steadily throughout the day. However, the index was released late in the afternoon. What happened on Friday, however, best illustrates our statements about groundlessness. Despite the failure of ADP earlier in the week, the most important nonfarm payrolls report came in much stronger than expected, at 263 thousand in November. The US dollar immediately began to rise, but after a few hours, it began to fall, and by the end of the day, it had returned to where it had begun to rise. As a result, the market should have considered it necessary to work out logically, even the Nonfarm report, which was unequivocally in favor of the dollar. As a result, there is only one conclusion to be drawn: we are now witnessing an illogical growth of the pair, and the same illogical fall could occur at any time. There is no relationship between the fundamental (or macroeconomic) background and the pair's movements.

The COT reports on the euro currency in 2022 are contradictory. During the first half of the year, professional players were openly "bullish," but the European currency steadily fell. Then, for several months, they were "bearish," and the euro currency steadily fell. The net position of non-commercial traders is now bullish and strengthening, and the euro is rising. Still, the relatively high value of the "net position" allows for the completion of the upward movement to occur soon. The number of buy contracts from the "non-commercial" group increased by 4.7 thousand during the reporting week, while the number of shorts increased by 4.6 thousand. As a result, the net position increased by approximately 0.1 thousand contracts. The European currency has continued to rise in recent weeks, coinciding with the COT report readings. At the same time, the US currency's growth may resume due to the same geopolitics or the complete absence of factors for further euro currency growth. The first indicator's green and red lines are very far apart, which may indicate the end of the ascending trend (which was not). The number of buy contracts for non-commercial traders is 133 thousand more than the number of sell contracts. As a result, while the net position of the "non-commercial" group may continue to improve, the euro may not follow suit. If you look at the overall indicators of open longs and shorts for all traders, sales are 33 thousand higher (755k vs. 723k).

This week in the European Union, there were almost no noteworthy events. And even if there were, they would be difficult to spot on the charts because the market spent most of the week simply selling the dollar, paying no attention to events or publications. Christine Lagarde spoke twice but didn't say anything new to the market, so there was no reaction. The EU published an inflation report for November, which showed a 0.6% decrease in the indicator, and the market did not react in any way. It is impossible to say what the market reacted to and why it did so. The point is that there was news that should have caused the dollar to rise and news that should have caused the euro to fall, but for some reason, we only saw the euro rise, although a technical downward correction has been brewing for more than two weeks.

Trading strategy for the week of December 5-9:

1) On the 24-hour timeframe, the pair has broken through all of the Ichimoku lines, indicating that it has a good chance of continuing to rise. Of course, if geopolitics deteriorates again, these opportunities will vanish quickly. Still, for the time being, we can expect an upward movement with a target of 1.0636 (100.0% Fibonacci) and higher and buy (cautiously) the pair. The most important thing is to ignore the fundamental background!

2) The euro/dollar pair sales are no longer relevant. To consider short positions, you must first wait for the price to fall below the key lines of the Ichimoku indicator. So far, no factors indicate the US dollar will resume its global trend. However, in today's world, everything can change in an instant.

Price levels of support and resistance (resistance and support), Fibonacci levels – targets when opening purchases or sales. Take Profit levels can be placed near them.

Indicator 2 on the COT charts is the net position size for the "non-commercial" group.