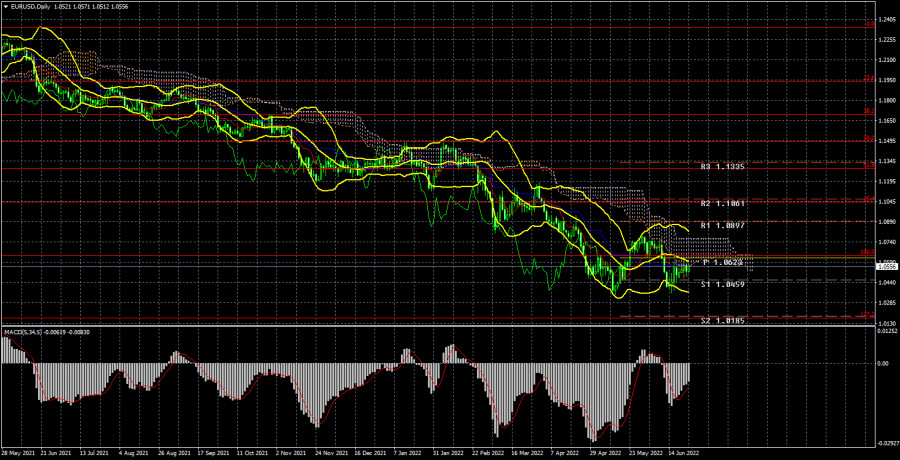 The EUR/USD currency pair has increased by 70 points during the current week. Is it worth saying that this is very little both in terms of volatility and in terms of currency growth? At the same time, the pair openly stood in one place all week, which is especially clearly visible just on the 24-hour TF. Although a week earlier the pair was trading near the critical line, that is, it could overcome it or bounce off it, nothing like this happened this week. Thus, it is simply impossible to draw any new technical conclusions. The global downward trend persists and there is still no sign that an upward trend can begin. Recall that it will be possible to seriously expect an upward trend only after overcoming the Ichimoku cloud. The Ichimoku indicator itself is already trying its best to help the pair, as its lines decrease over time (tend to the price). However, even this does not help the European currency to show at least some growth. Thus, we believe that the euro will continue to fall in the medium term. In the perspective of one or two weeks, the strained growth of the euro may take place, but it will be exclusively a corrective growth. Moreover, this week Jerome Powell assured the US Congress that reducing inflation to 2% remains the main goal of the regulator. The Fed is even ready to neglect the growth of the American economy. And this means that the rates will continue to rise. And any tightening of monetary policy is always a support factor for the currency. At the same time, the ECB continues to take the most passive position. Christine Lagarde has promised to raise rates twice this year, but this approach does not change anything at all in the balance of power between the dollar and the euro. It means that the maximum rate will be 0.5%. The Fed's rate is already 1.75%.

The latest COT reports on the euro currency raised a huge number of questions. Recall that in the last few months they have shown a frank "bullish" mood of professional players, but at the same time, the European currency has been falling all the time. At this time, the situation is beginning to change, and again, not in favor of the euro currency. If earlier the mood was "bullish", but the euro was falling, now the mood has become "bearish". What can we expect from the euro in this case? The question is rhetorical. During the reporting week, the number of buy contracts decreased by 11.4 thousand, and the number of shorts from the "Non-commercial" group decreased by 1.8 thousand. Thus, the net position fell again, this time by almost 10 thousand contracts. From our point of view, this fact very eloquently indicates that now even major players do not believe in the euro currency. The number of buy contracts is now lower than the number of sell contracts for non-commercial traders by 16 thousand. Consequently, we can state that now not only the demand for the US dollar remains high, but also the demand for the euro is gradually decreasing. This may lead to a new, even greater fall in the euro currency. In principle, over the past few months or even more, the euro has not been able to show even a strong correction, let alone something more. Its maximum upward movement was about 400 points. All fundamental, geopolitical factors remain in favor of the US dollar.

During the current week, there has not been a single important or even interesting event in the European Union. Traders could only pay attention to the business activity indices, which managed to fall in June almost to the critical level of 50.0. Their decline has been observed for a long period and, if things continue like this, they will go below the "waterline". In fairness, it should be noted that not everything is good with these indicators in the United States, as business activity indices have fallen even lower than in the European Union. This suggests that both economies are going through hard times right now. But, recall that in the States, the Fed is doing everything to make the economy "cool down", and does it specifically within a certain goal, while in the European Union, the ECB has not even started raising the rate yet, and the economy is already showing that it is hurting and bad. Thus, the ECB simply does not have room for maneuver, therefore the US currency still has a big advantage.

Trading plan for the week of June 27-July 1:

1) On the 24-hour timeframe, the pair stopped just a step away from the minimum for the last 20 years - 1.0340, but it could not move away from it in recent weeks. Almost all factors still speak in favor of the long-term growth of the US dollar. Traders failed to overcome the Ichimoku cloud, so the upward movement and purchases of the euro currency are still not relevant. You need to wait, at least, to overcome the Senkou Span B line, and only after that consider buying the euro currency.

2) As for the sales of the euro/dollar pair, they are still more relevant now. The price has fixed back below the critical line, so we have a new sales signal at our disposal with a target of 1.0172 (127.2% Fibonacci), which is already below 20-year lows. The signal will be canceled if the pair is fixed above the Kijun-sen line.

Price levels of support and resistance (resistance /support), Fibonacci levels - target levels when opening purchases or sales. Take Profit levels can be placed near them.

Indicator 1 on the COT charts - the net position size of each category of traders.