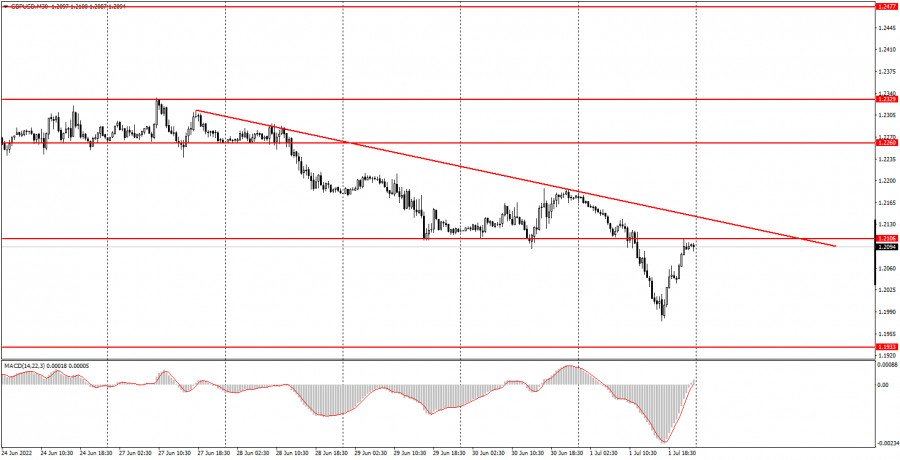 The GBP/USD pair also traded down most of the day on Friday. It should be noted right away that if there were reasons for the euro to fall, since the inflation report again showed its acceleration, then there were no macroeconomic statistics for the pound, at least in the first half of the day. Nevertheless, the British currency started to decline at night and fell by 200 points, which is a lot even for it, especially given the lack of macroeconomic and fundamental backgrounds. The pair managed to recover slightly during the US trading session, which was triggered by a weak ISM business activity index in the manufacturing sector. It fell from 56.1 to 53.0, so the US dollar had a reason to fall after the release of this report. As a result, the pound/dollar pair showed strong volatility almost out of the blue. The downward trend has resumed, but the pound has stopped a step away from updating its 2-year lows. Thus, the technical picture for the euro and the pound is still actually the same. 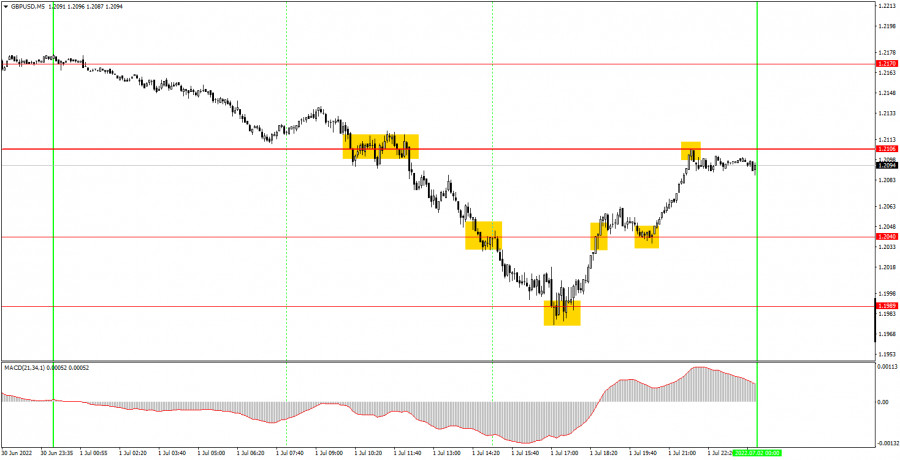 Friday's trading signals were almost perfect on the 5-minute time frame. First, the price overcame the level of 1.2106, after which it fell right down to the level of 1.1989. The downward movement was practically recoilless and naturally it should have been worked out with a short position. When the pair rebounded from the 1.1989 level, it should have been closed and a long position taken. In total, it was possible to earn about 90 points on a short position. Then the price began a rather strong growth and overcame the level of 1.2040 on the way up to the level of 1.2106. Traders could decide for themselves where to close the long position, since this only affected the level of their profit on the second transaction. At least 50 more points could be earned on it. Thus, although the high-volatility movements on Friday were practically unfounded, the presence of a trend once again helped novice players make good money. Once again, we remind you that trading on a trend movement is always good.

The pair formally started a new downward trend on the 30-minute timeframe this week. In the case of the pound, it was possible to form a downward trend line, which visualizes the trend. If the pair settles above it, then the downtrend can be considered completed (it can also be short-term). Otherwise, the pair will continue to seek to renew its 2-year lows around 1.1933. On the 5-minute TF on Monday, it is recommended to trade at the levels of 1.1933, 1.1989, 1.2040, 1.2106, 1.2170, 1.2216, 1.2260. When the price passes after opening a deal in the right direction for 20 points, Stop Loss should be set to breakeven. Neither the US nor the UK has a single important or even interesting event scheduled for Monday. Thus, newcomers will have nothing to react to during the day. It is a holiday in the US on Monday, so many sites and all banks will be closed. This means that the volatility can drop a lot, and the pair is in a flat all day.