31.10.201801:20 Forex Analysis & Reviews: EUR: The risk of the eurozone's collapse increased. Weak data on the eurozone economy may adversely affect the plans of the ECB

The European currency continues its decline against a number of world currencies, as well as the British pound in trading on Tuesday, October 30.

Confidence in the euro and the eurozone is decreasing more and more. This is evidenced by today's report from the company Sentix, which we will talk about below. 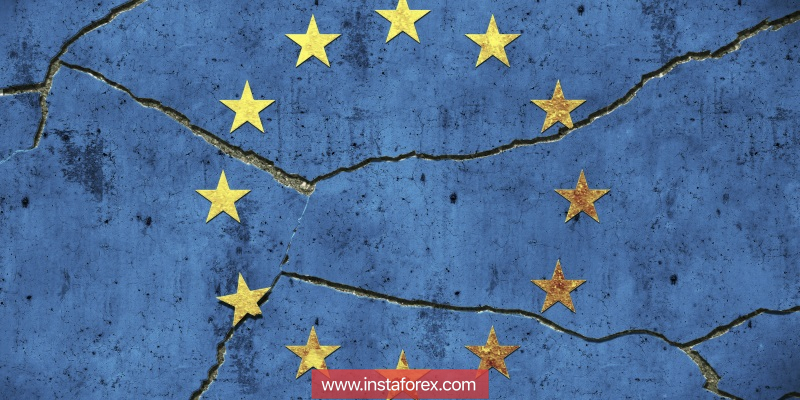 As for the short-term outlook, the pressure on the euro increased after the publication of the report on the eurozone economy, which in the 3rd quarter of this year showed a fairly modest growth rate, which seriously differed from the economists' forecasts. As noted in the report, the main factors constraining growth were weak industrial production, export slowdown and decline in retail sales.

According to the EU Bureau of Statistics, in the 3rd quarter of this year, GDP growth in the eurozone amounted to 0.2% against 0.4% in the 2nd quarter. Economists had expected the economy to grow 0.4 percent.

As for the annual growth rate, in the 3rd quarter GDP grew by 1.7% against the forecast of economists, who expected growth of 1.8%. The slowdown is quite significant, since the economy showed growth of 2.2% in the 2nd quarter. What is noteworthy is that such growth rates are the slowest since the 1st quarter of 2013.

Such a reduction may have a negative impact on the plans of the European Central Bank, which plans to complete the asset repurchase program in December this year. However, it is worth recalling that after the recent meeting of the ECB, which took place last week, the President of the Central Bank Mario Draghi made it clear that further measures to curtail incentives, as well as increase interest rates will directly depend on economic indicators at the end of the year. From this we can conclude that the European regulator may revise its forecast with an increase in interest rates, as well as resort to the extension of the bond purchase program until the spring of 2019, if the situation does not improve.

As for France's GDP for the third quarter of this year, according to the first estimate, the growth was 0.4%, while economists had expected a larger increase of 0.5%. On an annual basis, French GDP in the 3rd quarter grew by 2.1%, while the forecasted growth by 1.4%.

The whole reason for the decline in consumer spending, which in France in September of this year fell by 1.7% compared to August. Compared to the same period in 2017, the decrease was 1.5%. Economists had expected consumer spending to fall by only 1.0% and 0.5%, respectively.

The good situation in the German labor market, which remained favorable in October, partially offset the euro's fall.

According to the Federal Labour Office of Germany, the number of applications for unemployment benefits in October fell by 11,000 compared to the previous month. Economists predicted that the reduction will be 10,500. Unemployment in Germany in October remained unchanged at 5.1%.

The risk of a eurozone breakup has increased

As I noted above, the risks to the eurozone and the European currency have increased. We are talking about the Euro Break-up Index, which increased significantly in October this year. According to the Sentix report, the index rose in October to 13.2% from 8.9% in September. This suggests that 13.2% of investors seriously believe that the economy of the currency bloc may collapse in the coming year.

Such conversations have reasonable grounds. The risks have increased primarily because of disagreements over the Italian budget, which I have repeatedly mentioned in my reviews. Some investors believe that the Italian government will make concessions and will not go beyond the permissible budget deficit. However, every day there is less and less confidence in the positive outcome.