The only thing that interests market participants today is the results of the Federal Open Market Committee. Everything else does not matter at all. Fortunately, practically no macroeconomic data is published. So investors can calmly concentrate all their attention exclusively on the Federal Reserve meeting. And there are three possible scenarios for the development of events. The first two are that the US central bank announces the beginning of the curtailment of the quantitative easing program. The only difference is that this process can begin either in November or in December. In both cases, the dollar will start to grow steadily. The only question is the scale of its growth. If the reduction of the program begins only in December, then the dollar will grow a little more slowly. It should be noted that yesterday, after the opening of the US trading session, the dollar strengthened its position somewhat, so that investors are more likely to prepare for exactly one of these two scenarios. The third scenario is fundamentally different from the first two, and it consists in the fact that consideration of the issue of scaling down the quantitative easing program will be postponed to the December meeting of the FOMC. The likelihood of such a development of events is rather small, but in no case can it be ruled out. And in this case, the market will behave in a completely different way. The dollar will probably start to actively lose its positions.

The US dollar has partially recovered its lost positions against the euro, but price changes are insignificant. To a greater extent, there is a stagnation in prices due to a key economic event.

The technical instrument RSI in the hour period follows the level of 50, which confirms the signal of stagnation in price.

Due to the fact that the FOMC results will be announced today, the market may initially stagnate, and after speculative leaps, depending on the decision of the central bank. Traders consider the current year's local low of 1.1524 as a reference point of support. The current level of 1.1700 can play the role of resistance.

Complex indicator analysis has a variable signal based on short-term and intraday periods due to price stagnation. Technical instruments in the medium term have a sell signal in the form of a downward cycle. 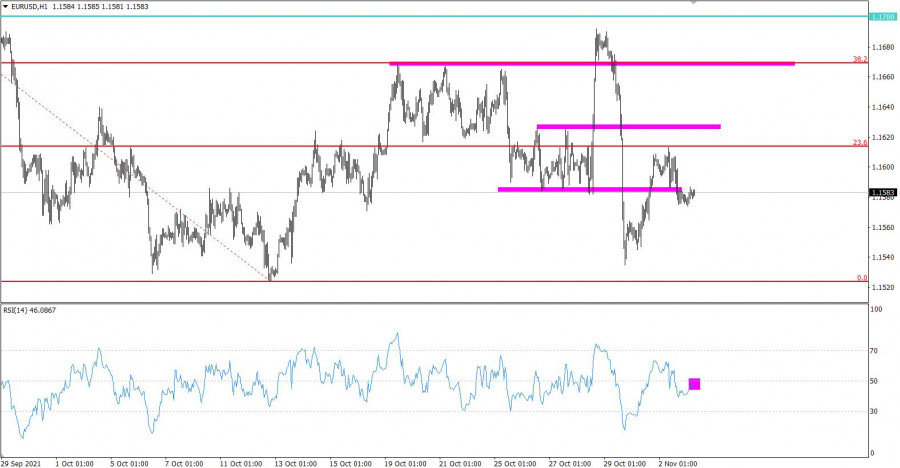 Breaking forecast for EUR/USD on January 30, 2023
The market is trading sideways ahead of the key central banks' meetings, which are scheduled for the second part of the week.
Hot forecast for GBP/USD on 27/01/2023
Although the U.S. economy has slowed down much more than expected, the situation on the currency market has not changed, as market participants...
Breaking forecast for EUR/USD on January 26, 2023
The euro returned to its local high. Today's data from the US is likely to boost it higher.
แสดงรายละเอียดเพิ่มเติม
บทความการวิเคราะห์ การวิเคราะห์พื้นฐาน แผนการซื้อขาย สกุลเงินดิจิทัล การวิเคราะห์ทางเทคนิค การคาดการณ์สดใหม่
All Analytics
การคาดการณ์สดใหม่ แผนการซื้อขาย สกุลเงินดิจิทัล คู่สกุลเงิน USD/RUB เศรษฐกิจรัสเซีย การวิเคราะห์วิดีโอ
ตราสารการซื้อขาย
EURUSD GBPUSD USDCHF USDCAD USDJPY AUDUSD EURGBP EURJPY NZDUSD EURNZD Silver Gold #CL #USDX COVID-19 Bitcoin