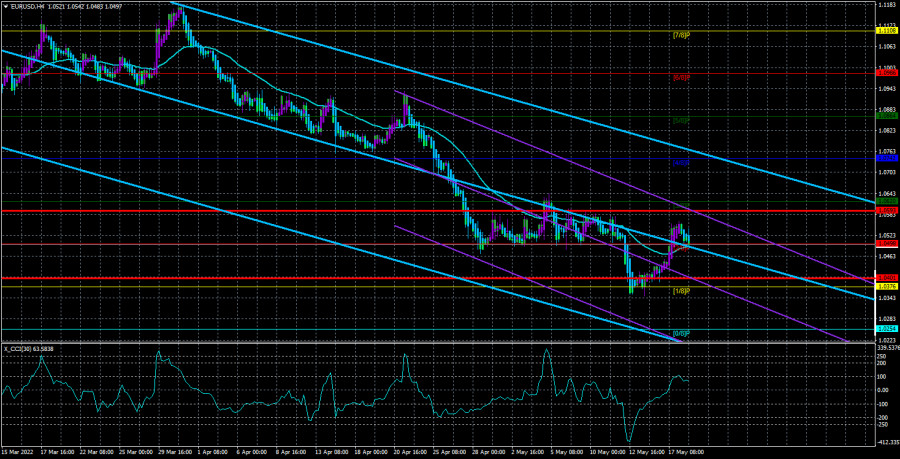 The EUR/USD currency pair managed to stay above the moving average line during Wednesday, above which it was fixed a day earlier. We have already said that almost the only factor supporting the euro now is "technology". However, even this factor has been "resting" recently - we have not seen a correction for a very long time. Even after a fairly strong growth on Tuesday, it is impossible to say that a new uptrend has now begun. The pair has not even reached its previous local maximum near the level of 1.0620. That is, so far, each next price maximum is lower than the previous one. And this is a clear sign of a continuing downward trend. Thus, it is necessary to wait for at least overcoming the level of 1.0620, and only after that, it will be possible to conclude that the euro/dollar pair will at least try to start a new trend. Since the "technical factor" remains practically the only one, the resumption of the downward movement cannot be ruled out. Now the pair is only slightly above the moving average. That is, it will not be difficult to return below it. Given the fact that geopolitics may deteriorate significantly on many fronts in the coming weeks and months, the market may rush to get rid of risky currencies again. Therefore, the pound and the euro clearly can't feel safe.

Jerome Powell's speech the day before yesterday did not give any fundamentally new information. Therefore, it does not even make sense to try to link it with the movement of the euro/dollar pair. The head of the Fed once again made it clear that the regulator will raise the rate, as planned, quickly and decisively, but at the same time will not "drive horses" and will constantly analyze inflation and economic growth. Powell has already stated the need to balance a fine line between recession and inflation. In other words, Powell wants to raise the rate as much as possible, but not exceed the value after which economic growth will become negative. However, in any case, this implies that the rate will be increased to at least 2.5-3.0%. In the European Union, meanwhile, ECB Head Lagarde once again did not give the exact timing of a possible first-rate hike. The market continues to rely on the statement that "the rate may be increased in a few weeks after the completion of the APP program." It's all.

Experts believe that a new geopolitical conflict may break out in the Baltic States.

Finland and Sweden have officially applied to join NATO. Earlier, Turkey, represented by President Erdogan, said that it would not approve the entry of these countries into NATO, since they are associated with terrorist organizations. NATO Secretary-General Jens Stoltenberg said yesterday at the application ceremony that the alliance will be able to overcome all differences and approve the entry of Finns and Swedes. Meanwhile, Poland, Lithuania, Latvia, and Estonia have asked NATO to increase its military presence on their territory. In particular, they advocate improving and increasing the number of air defense systems to significantly complicate a possible Russian invasion. In these countries, they believe that the Kremlin may decide on another "special operation" and do not want to repeat the "Ukrainian scenario" when hostilities first began and only a few weeks later NATO countries began to help Ukraine with weapons. It is also reported that Italy and France oppose such an expansion of NATO military forces into the Baltic States, as they believe that Moscow will not dare to invade, even without completing a "special operation" in Ukraine.

At the same time, military experts believe that a geopolitical conflict in the Baltic States is indeed possible, but unlikely in the coming months. They believe that over the next 10-15 years the situation in the region will be tense and the so-called redistribution of the Baltic region will begin. Another possible cause of the conflict is the Kaliningrad region, which may fall into a blockade due to the sanctions of the EU countries and the accession of Sweden and Finland to NATO. Experts believe that such a blockade will leave Moscow no choice but to cut a land corridor to its territory. In Ukraine, meanwhile, the situation is not improving. Kyiv is still busy accumulating Western weapons and plans to launch a counteroffensive by mid-summer. 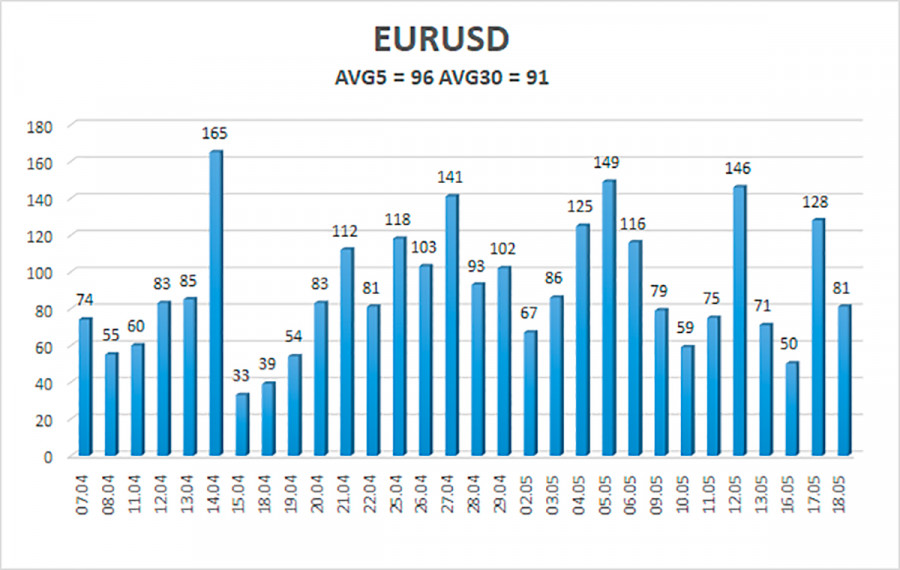 The average volatility of the euro/dollar currency pair over the last 5 trading days as of May 19 is 96 points and is characterized as "high". Thus, we expect the pair to move today between the levels of 1.0401 and 1.0593. A reversal of the Heiken Ashi indicator back up will signal a possible resumption of the upward movement.