07.07.202206:45 Forex Analysis & Reviews: Forecast and trading signals for GBP/USD for July 7. COT report. Detailed analysis of the pair's movement and trade deals. The British pound has lost its fuse and is waiting for Nonfarm data. 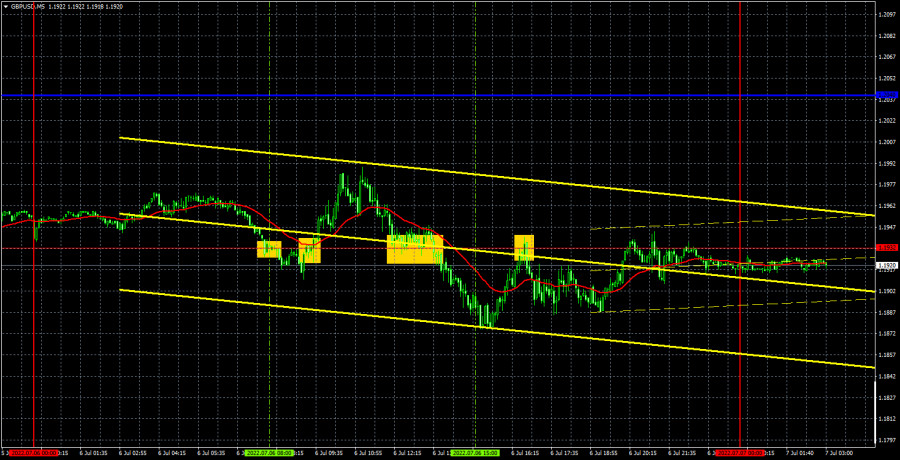 The GBP/USD currency pair continued to fall on Wednesday, but not as strong as the day before, or as demonstrated by the euro on the same day. There was practically nothing for traders to react to during the day, although at the US trading session, indexes of business activity in the services sector according to S&P and ISM versions were published. Both indexes turned out to be worse than previous values, but better than forecasts. Thus, they cannot be called unambiguous. We can assume that the reaction to the S&P did follow, since it was at this time that the US dollar rose by 40 points, but if you look closely, it becomes clear that at the same moment the price simply rebounded from the level of 1.1932. Thus, this fall could be purely technical. In the UK, there was not a single important event at all during the day.

But there were four trading signals for the pound/dollar pair. And everything is near the same extreme level at 1.1932. Let's take a look at them in detail. The first sell signal turned out to be 100% false, as the price failed to go down after its formation and by 10 points. The deal had to close at a loss. The next buy signal was already stronger, and the pair was able to rise by almost 50 points. It should be noted that the nearest levels/lines above and below the level of 1.1932 were located very far away, so it was not necessary to count on their development. Therefore, the signals, as a result of which the targets were not worked out, cannot be considered false. Transactions on such signals (although it is difficult) should have been closed manually. The third sell signal was also not false. The pair fell after its formation by 40 points. The last sell signal is the same. As a result, even if traders could not close the second and third deals in profit, they definitely made a profit on the fourth one, which in any case should have been closed manually. This means that the total loss for the day was avoided. 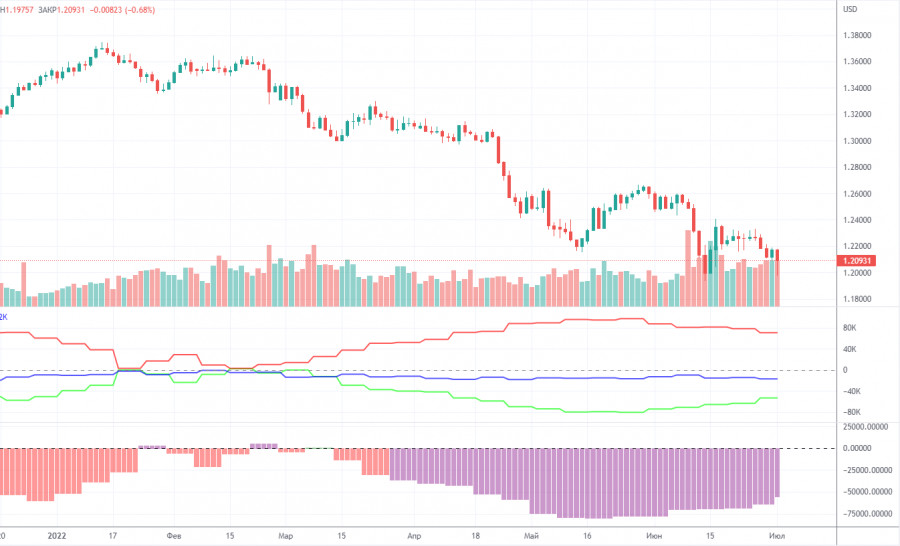 The latest Commitment of Traders (COT) report again showed insignificant changes. During the week, the non-commercial group opened 6,700 long positions and closed 3,400 short positions. Thus, the net position of non-commercial traders increased by 10,000. However, the mood of major players still remains "pronounced bearish", which is clearly seen from the second indicator in the chart above. And the pound, despite the increase in the net position, still cannot show even a tangible upward correction. The net position has been falling for three months, now it is rising, but what difference does it make if the British currency is depreciating anyway? We have already said that the COT reports for the pound do not take into account the demand for the dollar, which is likely to remain very high right now. Consequently, even for the strengthening of the British currency, it is required that demand for it grows faster and stronger than demand for the dollar. The non-commercial group currently has a total of 88,000 short positions open and only 35,000 longs. The net position will have to show growth for a long time to at least equalize these figures. Neither macroeconomic statistics nor fundamental events support the UK currency. As before, we can only count on corrective growth, but we believe that the pound will continue to fall in the medium term.

Overview of the EUR/USD pair. July 7. The euro continues to fall due to geopolitics.

Overview of the GBP/USD pair. July 7. Boris Johnson's henchmen are fleeing the government because of another scandal.

Forecast and trading signals for GBP/USD on July 7. Detailed analysis of the movement of the pair and trading transactions. 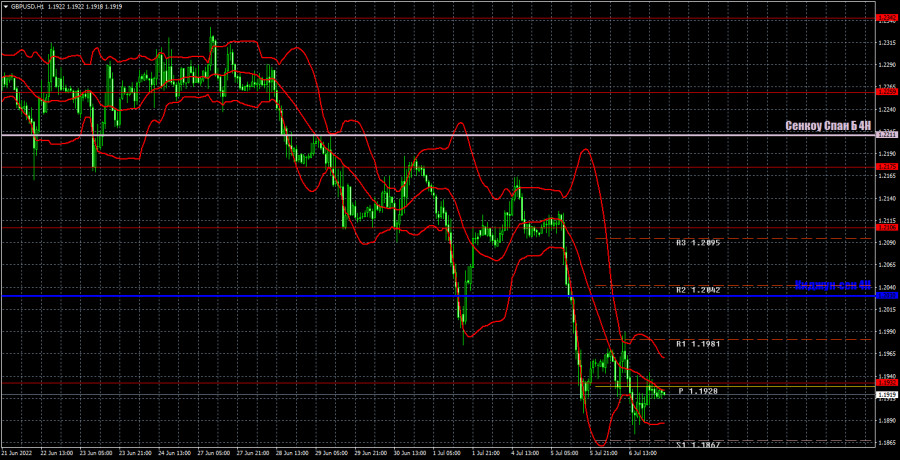 The quotes of the British pound made an impressive collapse on the hourly timeframe and, in principle, can continue to do so in the final days of the week. We believe that both pairs should correct on Thursday or Friday, but in general, the downward trend continues (especially on higher timeframes) and does not raise any questions. We highlight the following important levels for July 7: 1.1932, 1.2106, 1.2175. Senkou Span B (1.2211) and Kijun-sen (1.2030) lines can also be sources of signals. Signals can be "rebounds" and "breakthroughs" of these levels and lines. The Stop Loss level is recommended to be set to breakeven when the price passes in the right direction by 20 points. Ichimoku indicator lines can move during the day, which should be taken into account when determining trading signals. The chart also contains support and resistance levels that can be used to take profits on trades. There are no major events or publications scheduled for Thursday in the UK. In the US, we recommend paying attention to the ADP report, but even yesterday's business activity indexes showed that we should not expect a strong reaction, and the pound can be traded all day, regardless of the statistics.