EUR/USD tested 1.0244 on Wednesday. At that time, the MACD line was just starting to move below zero, so the pair fell by more than 50 pips. It hit 1.0198, where buyers became active again, but the increase was only brief. The pair continued to decline after some time. 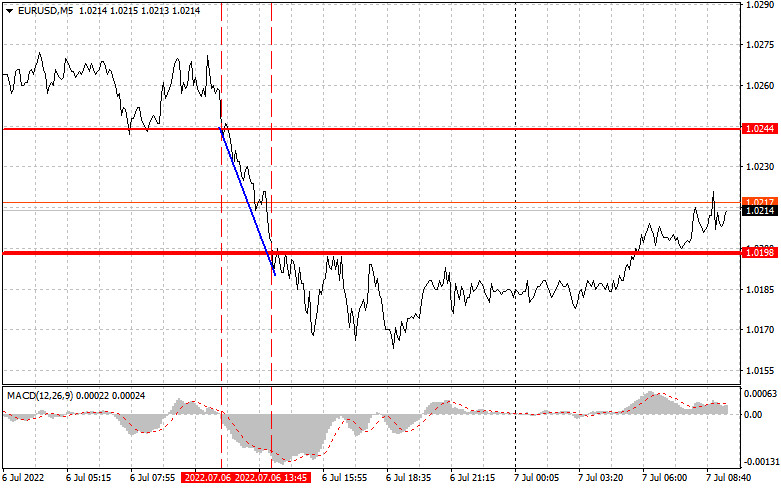 The Euro area's retail sales data for May, along with economic forecasts for the region, disappointed traders as they were relatively weaker than expected. Meanwhile, the business activity report from the IHS Markit exceeded expectations, strengthening the demand for dollar even further.

Ahead are key events that could drive the market, such as the release of ECB protocol, speeches of ECB representatives and the publication of industrial production data in Germany. Later in the afternoon, the US will post reports on the labor market, particularly the change in the number of people employed in the non-farm sector and the number of first-time claims for unemployment benefits. The two may provide more buying pressure to dollars. US trade surplus figures and speeches by FOMC members are unlikely to have a strong impact on the market.

Buy euro when the quote reaches 1.0228 (green line on the chart) and take profit at the price of 1.0268 (thicker green line on the chart). There is a chance for a rally today, but only after strong statistics in the Euro area and hawkish statements from the ECB. Also, make sure that when buying, the MACD line is above zero or is starting to rise from it. Euro can also be bought at 1.0195, but the MACD line should be in the oversold area as only by that will the market reverse to 1.0228 and 1.0268.

Sell euro when the quote reaches 1.0195 (red line on the chart) and take profit at the price of 1.0151. Pressure will return if upcoming data in Germany and the Euro area are weak and if reports in the US, especially about the labor market, exceed expectations. However, when selling, make sure that the MACD line is below zero or is starting to move down from it. Euro can also be sold at 1.0228, but the MACD line should be in the overbought area, as only by that will the market reverse to 1.0195 and 1.0151. 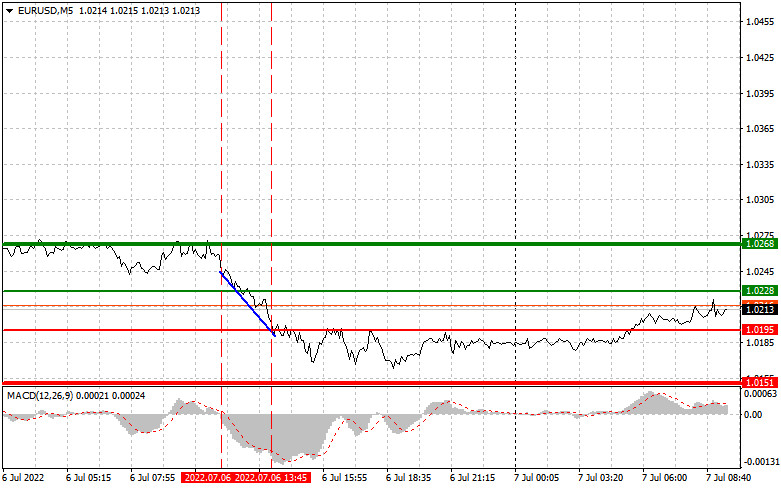