The ongoing uncertainty and nervousness of investors continues to shake the markets. So, after the markets opened today with an impressive upward gap of the dollar and the decline of all major currencies against it, at the beginning of today's European trading session, the picture has changed to the opposite. Dollar sellers are again trying to take control of the situation, also using today's morning correction to open new short positions on the dollar.

In this regard, the current dynamics of the EUR/USD pair looks very indicative. Earlier today, it sharply declined but rose again, even sharper, at the beginning of today's European trading session.

Thus, as of writing, the EUR/USD pair was trading near the 1.0470 mark. This is after the pair gapped down 36 points today and reached an intraday low of 1.0342 during the Asian trading session.

To be fair, it should be noted that the euro is strengthening today in the main cross-pairs. For example, paired with the pound, the euro has appreciated by 0.8% (by 70 pips) since the opening of today's trading day. This is quite a lot for the EUR/GBP pair, given that its average intraday volatility is 100 pips. 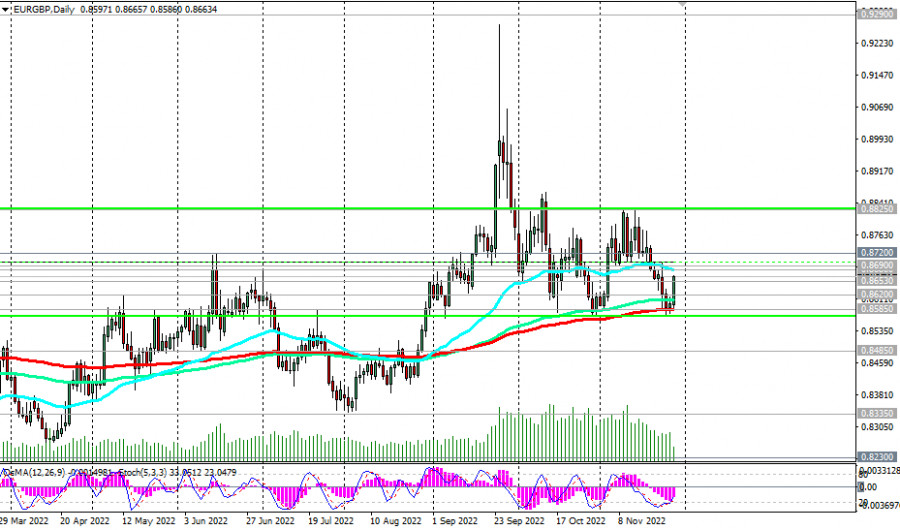 The euro is developing an upward trend ahead of the announcement of the speech of ECB President Christine Lagarde at 14:00 (GMT). Market participants probably expect to hear from her tough statements about the need for ECB's decisive action regarding the growing inflation in the euro area. Although the Eurozone consumer price index forecast suggest a slowdown in the annual rate to 10.4% in November, inflation remains at its highest level in decades, recorded at 10.6% in October.

Most of all, prices of energy, food, alcohol and tobacco went up in Europe. The core HICP index, which excludes volatile food, energy, alcohol and tobacco prices, was 5% in October (year-on-year). Clearly, the rise in consumer price inflation will reinforce the hawkish rhetoric from the ECB leadership, which will strengthen the euro.

"Although the risk of recession has increased, we expect further rate hikes to levels necessary for a timely return of inflation to our medium-term target level of 2%... Inflation in the eurozone is too high," Lagarde recently said at the European Banking Congress in Frankfurt. "Interest rates are and will continue to be the main tool for adjusting our policies," she concluded.

Given these statements, market participants expect similar rhetoric from her today. By the way, the preliminary consumer price index (CPI) for November will be published on Wednesday at 10:00 (GMT). Inflation estimates are important for central bank guidance in setting the parameters of current monetary policy. Rising inflation and its high level will put pressure on the ECB to tighten its monetary policy, which is considered a positive factor for the national currency in normal economic conditions.

The key event of this week will be the publication on Friday of the monthly report of the US Department of Labor with data for November. 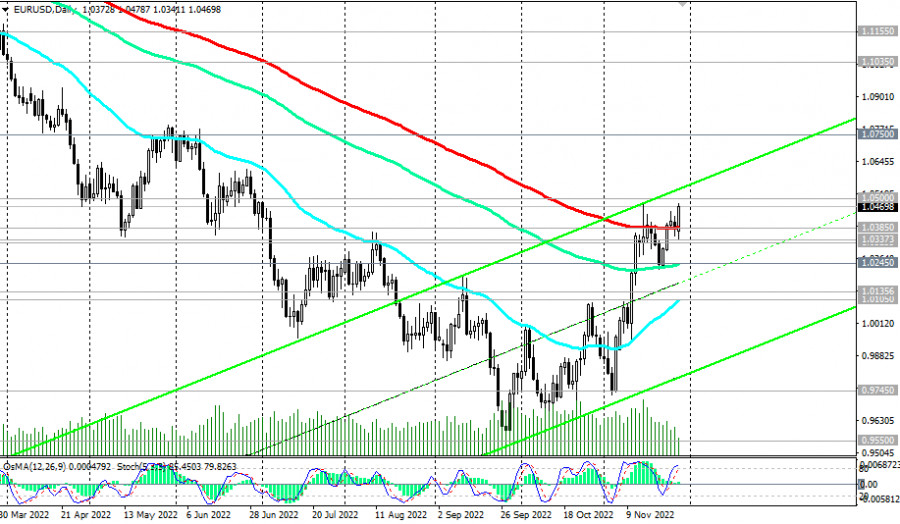 From a technical point of view, EUR/USD is aiming for the 1.0500 key resistance level, near which we expect a pullback and renewed decline, and EUR/GBP—to the 0.8680 resistance level. There will also be a rebound near this level if the first condition is met: if EUR/USD rebounds from 1.0500 or if the pound strengthens even faster in the near future.