Overview of trading and tips on EUR/USD

The test of 1.0554 coincides with the moment when the MACD indicator was beginning its downward move from the zero mark. This confirmed the right market entry point for short positions on EUR/USD. The price fell about 20 pips. Then, the selling pressure weakened. There were no other goof signals for market entry. 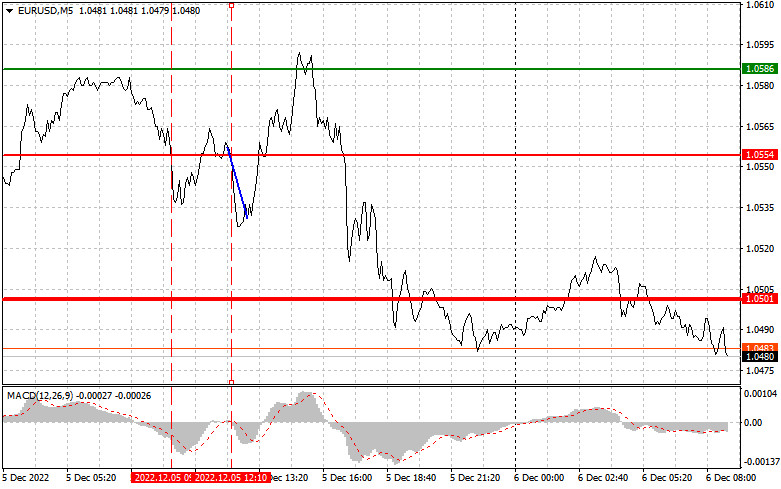 The euro gave a negative response to the services PMI for Germany and the Eurozone as well as the composite PMI. Both the service and manufacturing sectors in the Eurozone are losing momentum which dampens investors' optimism. The upbeat ISM non-manufacturing PMI for the US also set the stage for a lower decline in EUR/USD in the second half of the day. Today during the European session, market participants will take notice of Germany's factory orders and the EU construction PMI. However, such data is of secondary importance to the currency market. So, the reports will make no impact on EUR/USD. Nevertheless, too weak readings will sustain the pressure. No macroeconomic data is on tap in the second half of the day. The US trade balance will be also of little importance to the market. EU finance ministers are due to assemble for the summit today where they will take crucial decisions.

Scenario 1. Today we could buy EUR when the currency pair reached 1.0504 plotted by the green on the chart with the target at 1.0565. I would recommend exiting the market at 1.0565 and then, open short positions in the opposite direction, reckoning a 30-35-pips move downwards from the entry point. We could expect growth in EUR/USD only in case of upbeat reports for Germany and the Eurozone. Importantly, before buying the pair, make sure that MACD is located above the zero mark and is just beginning its climb from it.

Scenario 2. Another option is to buy the euro today in case the price reached 1.0469, but MACD should have already entered the oversold zone by that moment. This will cap the downside potential of EUR/USD and will enable the upside reversal of the market. We could expect the price growth to the opposite levels of 1.0504 and 1.0565.

Scenario 1. We could sell the euro today after the price reaches 1.0469 plotted by the red line on the chart. The downward target is seen at 1.0423, where I recommend exiting the market and then, open long positions in the opposite direction, bearing in mind a 20-25-pips upward move from the market entry. The currency pair will come under selling pressure in case of weak statistics from the Eurozone. This might lead to a protracted downward correction. Importantly, before selling the instrument, make sure that MACD is below the zero mark and is just beginning its slide from it.

Scenario 2. Besides, we could sell EUR/USD also in case the price reached 1.0504, but at that moment MACD should be in the overbought zone which will limit the upside potential of the pair and enable the opposite reversal of the price downward. The pair is expected to decline to the opposite levels of 1.0469 and 1.0423. 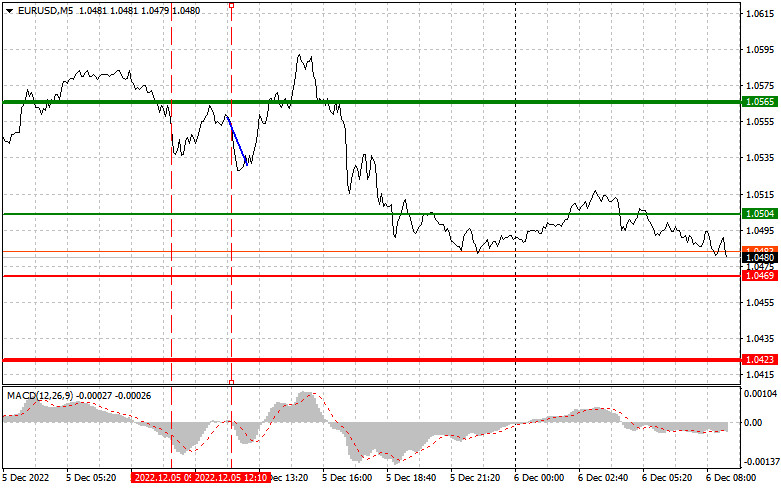 What's on the chart

The thin green line is the key level at which you can open long positions on the instrument.

The thick green line is the target level, since the price is unlikely to move above this level.

The thin red line is the level at which you can open short positions on the instrument.

The thick red line is the target level, since the price is unlikely to move below this level.

MACD line. When entering the market, it is important to adjust trading decisions to the overbought and oversold zones.

Important: Novice traders need to be very careful when making decisions about entering the market. Before the release of macroeconomic data, it is best to stay out of the market to avoid trading during sharp fluctuations in market quotes. If you decide to trade during the release of news, then always place stop orders to minimize losses. Without placing stop orders, you can very quickly lose your entire deposit, especially if you do not use money management and trade large volumes.

Remember that for successful trading, you need to have a clear trading plan. Spontaneous trading decisions based on the current market situation will inevitably lead to losses for an intraday trader.

Analysis and trading tips for GBP/USD on February 1

Analysis of transactions and tips for trading GBP/USD Pound tested 1.2330 just when the MACD line was starting to move below zero, which was a pretty good reason to sell

Analysis and trading tips for EUR/USD on February 1

The test of 1.0834 occurred when the MACD line was just starting to move below zero, which was a pretty good signal to sell. Accordingly, it resulted in a price