In the morning review, I turned your attention to the level of 1.2146 and recommended making decision on market entry with this level in focus. Now let's take a look at the 5-minute chart and sort out the developments in the market. The price growth and a false breakout at 1.2146 created excellent conditions for increasing short positions on GBP/USD, reckoning a further downward move which has been in progress since Monday. However, after a drop of 30 pips, selling pressure on GBP sharply eased. As a result, the bulls insisted on a breakout and the currency pair settled above 1.2146 which assured traders to revise the technical picture of GBP/USD. 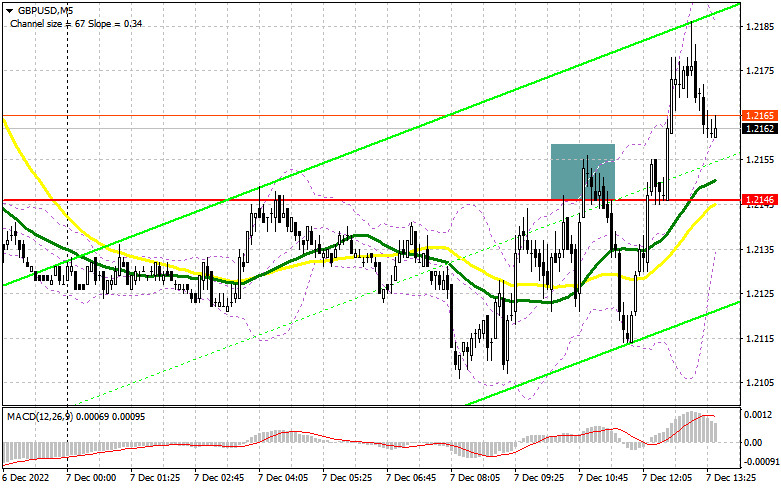 What is needed to open long positions on GBP/USD

The lack of statistics from the UK didn't allow the bears to push GBP lower though the downward move was supposed to be robust. Today, in the second half of the day, the market will get to know the data on US nonfarm productivity and the labor unit costs. The data is of no importance to the currency market and will hardly make any impact on GBP/USD. I won't be surprised if after a failed attempt to defend 1.2137, the pair will be traded below this level.

As long as GBP/USD trades at higher levels, the odds are that the pair will continue its climb. In case the instrument declines and makes a false breakout at 1.2137, we could get an excellent market entry point for long positions. This price action will entail a second push higher and the price will aim to make a higher high at 1.2203. Moving averages are passing slightly below this level, benefiting the sellers. A breakout and updating this level downwards will give fresh impetus to buying pressure. Hence, the market will produce a buy signal with the target at 1.2265. The higher target is seen at 1.2340, a month-high, where I recommend profit-taking.

If the bulls don't cope with the task set in the second half of the day and miss 1.2137, GBP/USD is likely to develop a large downward move, aiming to update the intraday low. In this case, I would recommend buying at about the next support at 1.2071. We could open long positions on GBP/USD immediately at a drop off 1.1999 or lower at 1.1954, bearing in mind a 30-35-pips intraday upward correction.

What is needed to open short positions on GBP/USD

The sellers are not active for the time being, especially after the price failed to settle at intraday lows on Wednesday in the early European session. Now the time is right to think about how to regain control over 1.2137. Strong statistics from the US will lend a helping hand to the bears. Even amid the empty economic calendar today, I'm betting on GBP/USD's weakness. The sellers' major task today is to close the day below 1.2137 so that they could take over the market. We should not forget about resistance at 1.2203 which the price missed narrowly in the first half of the day. Only a false breakout like it happened earlier will generate an excellent market entry point for short positions with a downward target at 1.2137. A breakout and the opposite test of this level upwards will produce an extra sell signal, bearing in mind a downward move towards 1.2071 where the bears will again encounter obstacles. The lowest target is seen at 1.1999 where I recommend profit-taking. If we don't see an active move from 1.2203, the bulls will try to enter the market, thus pushing the price up to 1.2265. A false breakout there will produce an entry point for short positions, relying on a downward move. In case the pair trades sluggishly there, I would recommend selling GBP/USD immediately at a bounce off 1.2340, bearing in mind a 30-35-pips intraday move. 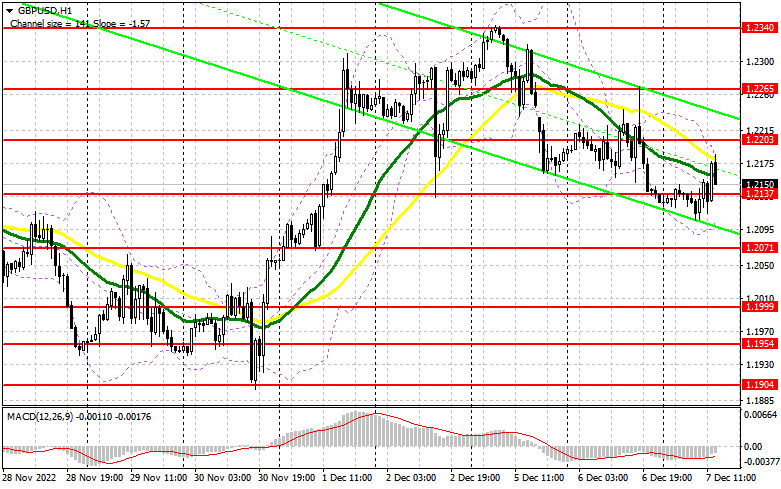 In the COT report (Commitment of Traders) for November 29, both short positions and long positions continued to decline. It is obvious that the recent statistics don't encouraging the sterling bulls. The contraction in the UK business activity both in the manufacturing sector and in the service sector, clearly indicates that the British economy is slipping into a recession, which the Bank of England does not intend to fight much for now. The regulator is focused on its fight against high inflation, which, as recent data has shown, continues its acceleration. Against this background, it is not surprising why traders prefer to stay on the sidelines and are not really poised either to buy or sell the pound sterling. And if you look at how much the pair has risen since November this year, it doesn't make sense to go long at the current highs at all, as the US economy proves its robust performance, which will certainly revive demand for the US dollar after the Federal Reserve meeting next week.

The currency pair is trading at about the 30 and 50 daily moving averages. It indicates uncertainty in a further trajectory.

If GBP/USD goes down, the indicator's lower border at 1.2120 will serve as support.