On Wednesday, the GBP/USD currency pair maintained its position above the moving average line. As a result, the pair has slightly pulled back downward, but breaking below the moving average line was impossible. Because both linear regression channels point upward, the upward trend is still present. At this time, none of the indicators point to a potential pair decline. We stated earlier that the pound has only strengthened over the past few weeks. This is only partially accurate, as there are still occasional downward pullbacks. However, they are also too feeble, and the pair has long needed a significant downward correction. Over the past two months, the pound has increased by more than 2,000 points. Under any circumstance and with any fundamental or macroeconomic background, this is excessive. Even if we are incorrect in our assessment, a correction of at least 400–500 points downward should occur after such an increase. Furthermore, the pair should stabilize for a few weeks to avoid further growth because, at this rate, the pound will rise another 2,000 points in a few months, making the currency pair more volatile than bitcoin. The movements have always been more controlled and smooth in the foreign exchange market. It rarely has significant ups or downs. But that is what we are currently witnessing.

This week, the UK had no macroeconomic background. Two reports on business activity in the services and construction sectors were released, but neither supported a stronger pound. The ISM index for the USA unexpectedly rose for many people. If we only consider this week, the movement may be logical. But why, for instance, did the pound price increase again yesterday? Even though nothing significant happened on Wednesday in the UK or the US, it nevertheless continued to grow.

Trump is confidently on his way to losing another election.

We already mentioned in the article on the euro/dollar exchange rate that discussing upcoming central bank meetings makes little sense in light of the recent movements of the currency pair. However, since the fundamental background is completely missing at this point, it will also be impossible to talk about anything else. Even topics that are not directly related to the economy are not significant or interesting. It is only important to note that, as we discussed a few weeks ago, the Democrats ultimately prevailed over the Republicans in the elections for the US Senate. As a result, the Lower House results show a victory for the Republicans, while the Upper House results show a victory for the Democrats. Also, Democrats are still the president and vice president. As a result, the Republican victory was extremely flimsy and uncertain. Their advantage is negligible even in the House of Representatives, where the Democrats hold 213 seats and the Republicans have 221. The outcome was not what the party of Donald Trump, who has already declared his intention to run for president in 2024, expected.

We predicted time and time again that Trump would not win a second term simply because he was Donald Trump during the 2020 election. It is very difficult to think of a president of the United States with a more scandalous personality. It is very difficult to recall what has improved in America under Trump, even if we ignore all the scandals in which he has been involved. Trump, who for a long time equated the "coronavirus" with a "runny nose," may be to blame for the failure of the fight against the pandemic. And when the 2020 election kicked off, Biden won simply because many Americans were willing to vote for anyone other than Trump, not because he was a stronger candidate than Trump. Well, how could anyone forget the scandal over which Trump resigned? As a result, Donald Trump will not be elected president in 2024. Although he may receive the votes of 60 or even 70 million Americans, more people will still remember his "merits" to the country. 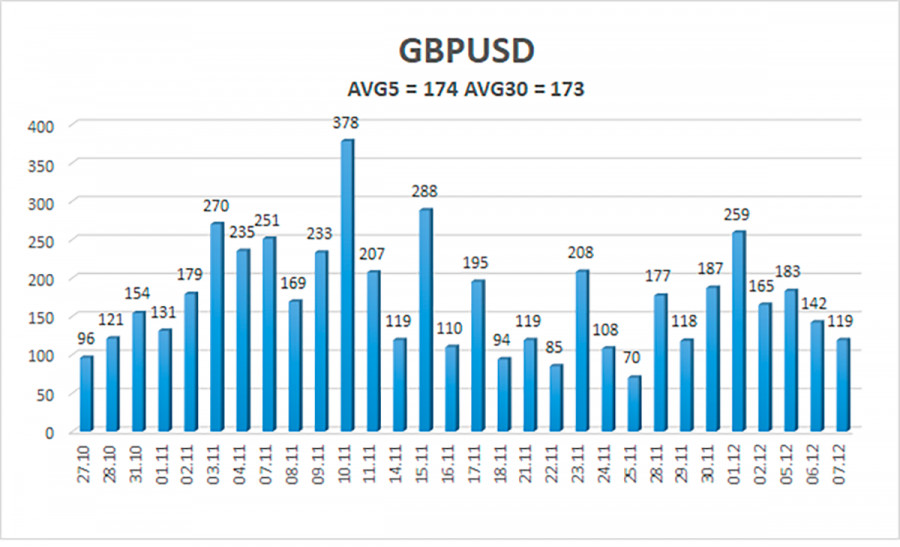 Over the previous five trading days, the GBP/USD pair has averaged 174 points of volatility. This value for the dollar/pound exchange rate is "very high." As a result, on Thursday, December 8, we anticipate movement constrained by the levels of 1.2004 and 1.2371. The Heiken Ashi indicator's upward reversal indicates that the upward movement has resumed.