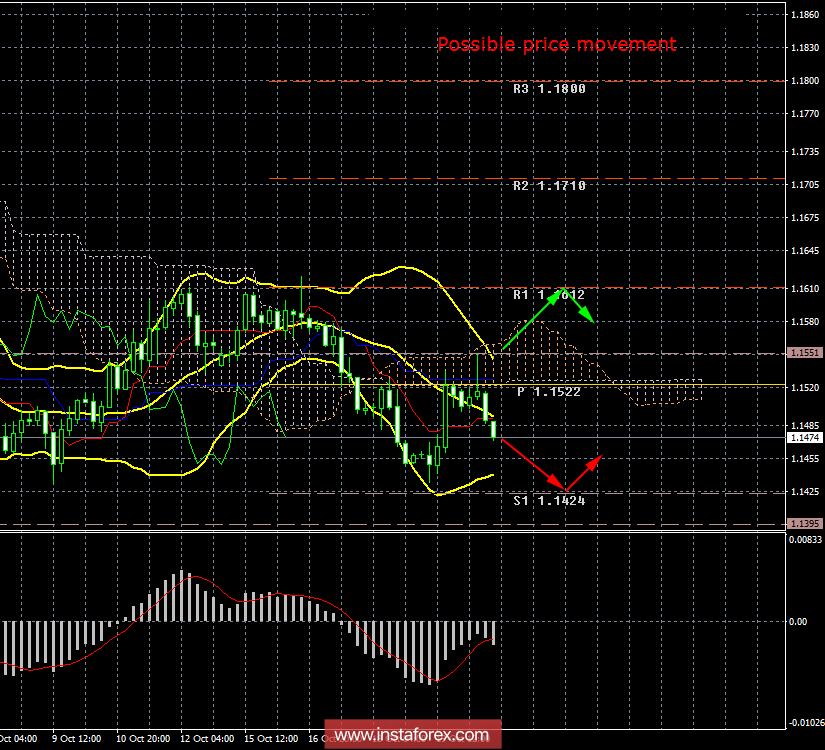 The first trading day of the new working week ended with a new fall for the EUR/USD pair, not too strong, but still. The price perfectly worked the critical Kijun-sen line twice and, having pushed off from it, resumed the downward movement. Thus, we believe that the reasons for the downward movement on Monday, October 22, are purely technical. The pair, as a textbook, corrected on Friday to Kijun-sen and now resumed the downtrend. We consider the topic of the Italian budget and some confrontation on this issue with Brussels so far not too significant. It should be remembered that any pair can move in any direction and without the corresponding fundamental reasons. Thus, in our opinion, this is the situation now. It is even possible that it is in fact the political crisis in the UK, the possible resignation of Theresa May, as well as the unresolved issue of Brexit are the factors that are pulling down the euro, and not the issue of the budget of Italy. The Brexit theme itself is much more important than the Italian budget. Britain's exit from the EU without a "deal" will be unprofitable for both sides, although, of course, the UK will suffer more damage. The calendar of macroeconomic events today was completely empty and will remain so until Thursday. Thus, the technical factors of the currency pair movement remain a priority.

For the EUR/USD pair, the price resumed its downward movement. Thus, now shorts are relevant with the support level of 1.1424 as the first goal. A reversal of the MACD indicator downwards will confirm the pair's intention to a new decline.

Buy orders can be opened after crossing the Kijun-sen line. In this case, the bulls will take the initiative on the instrument, and the first goal for the upward movement will be the resistance level of 1.1612.