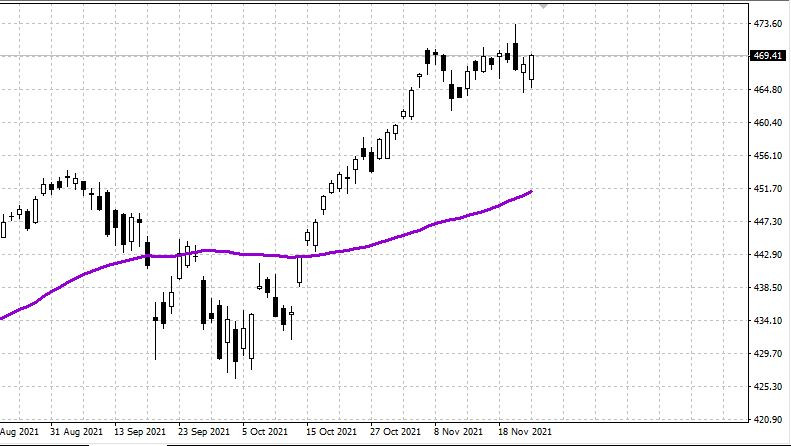 The sentiment in the stock market is improving. The main stock indices managed to advance.

The main US stock indices moved up significantly. Yesterday at the opening, the stock indices fell noticeably but later they won back their losses. The Dow was trading without changes. The NASDAQ Composite rose by 0.4%, while the S&P 500 gained 0.4%.

Asian stock markets closed mixed in the morning. The main stock indexes of Japan added 0.7%, whereas, in China, they decreased by 0.2%.

As for the commodity market, oil prices are now located at their weekly highs. Brent crude is trading at $82.40. Market participants are waiting for the OPEC+ meeting, scheduled for November 30. OPEC is highly unlikely to increase oil output despite the oil shortage in markets. Earlier, the US openly called on OPEC to increase oil supplies to stop price increases. However, OPEC was reluctant to change its policy. As a result, the United States was forced to release 50 million barrels of oil from its Strategic Reserves. This amount is not that big. Besides, it is a one-time measure. If oil prices rise higher, it will also affect the oil-exporting countries. Global demand will fall as well as oil prices.

The fourth coronavirus wave is raging across the world. The US record again more than 100,000 cases per day and 104,000 cases yesterday. Germany is also facing a surge in new cases. Yesterday, there were 74,000, which was the highest increase on record. In Russia, France, Poland, the Czech Republic, the number of new coronavirus cases was above 25,000. The EU authorities are forced to tighten restrictions for the unvaccinated. Some countries make COVID-19 vaccines mandatory.

Yesterday, before leaving for the weekend, the US unveiled a batch of macroeconomic statistics. Initial jobless claims fell sharply by 70K, to +199 K. The current unemployment rate has not been at such a low level for a very long time. Revised GDP for Q2 totaled 2.1%, which was in line with the forecast. The GDP deflator shows high annual inflation of 5.9%. The PCE price index amounted to 0.6% on monthly basis. Consumer spending increased in October by 1.3% month-on-month, significantly exceeding the forecast figure.

Optimism in the stock market could be fueled by the high level of consumer spending. At the close of the market, the charts showed the strong bullish sentiment and readiness of investors to open long positions next week.

The US dollar index is trading at 96.80. It is likely to stay in the range of 96.50 - 97.10. It managed to climb again yesterday. It has been rising for the three consecutive days from 94.20 to 96.80. So, it added 2.5% The US dollar exhibited strength in anticipation of Fed monetary policy tightening. The regulator does want to raise the interest rate. However, traders are sure, the Fed will have to do it due to growing inflation.

Conclusion. The US stock market is expected to retain its growth after the weekend. However, it is overheated. Therefore, a sharp downward reversal may occur at any moment.