Forex Analysis & Reviews: EUR/USD. Overview for November 29. The ECB may launch a QT program in the coming months.

On Monday, despite the near absence of news and events, the EUR/USD currency pair was trading higher. The growth started early in the day, much earlier than the only event of the day - Christine Lagarde's speech, and it should be noted immediately. As a result, this event was unable to have any impact on the market's mood. And the current atmosphere is unquestionably "bullish" and does not raise any concerns. As we've already stated, the expansion of the euro is wholly justified and logical from a technical standpoint. Now, every indicator on the 4-hour and 24-hour TF is visible. Therefore, conceptually, there are no issues with the European currency's growth. When we discuss macroeconomics as a foundation, it becomes a different issue. Since the market trades every day, the pair can grow perfectly well without significant newsworthy events or publications, as we have already stated. However, the euro has been expanding rapidly for almost a month, and such a sustained expansion has us scratching our heads. What foundation is the euro currently growing on?

Remember that, in theory, a few factors could account for the pair's current movement. For instance, we can state that the risk sentiment in the market is rising right now, but what does this mean, and why is it rising? It is very challenging to respond. Why, then, did traders suddenly start paying attention to risky currencies when the geopolitical situation in the world hasn't changed in any way over the past month? The foundation is the same way. Yes, the ECB rate is rising quickly, and starting next month, it may start to outpace the Fed rate in terms of growth. But is this one factor enough for the euro to rise by 750 points in less than a month? It is extremely difficult to refer to macroeconomic statistics as "supporting the euro" at all. The only theoretical support factor is anticipating a slowdown in the Fed's tightening pace. How much more will the euro currency appreciate based solely on this factor?

As we've already stated, it makes sense to trade for an increase while all indicators point upward. Any fundamental theory requires specific technical signals to support it. There is no need to try to predict the reversals or the future movement if there are none. The market may be closing out the short positions it has been building up for the past two years.

The ECB is getting ready to reduce its balance sheet.

The fundamental background is nonexistent during the first two trading days of the week. Christine Lagarde gave another speech on Monday, but this time she didn't offer any novel insights into the market. The market had no doubts about her assurance that rates would continue to be a crucial tool in the struggle against high inflation. In other words, as long as EU inflation remains sky-high, the ECB rate will rise, which the market did not doubt. Lagarde added that the topic of shrinking the ECB's balance sheet (the QT program) will be discussed in December, which should also cause a slight slowdown in the consumer price index. It's already in the news! Given that Lagarde's speech was quite late in the day on Monday, it hardly had any impact on the appreciation of the euro.

The ECB chief also noted that although it is unlikely to occur soon, the central bank's balance sheet reduction should go smoothly, and rates will eventually fall. The state of the economy, the labor market, wages, and inflation expectations will all be important factors. As you can see, traders continue to have formal reasons to purchase the euro from a foundational standpoint. Still, we believe that the current fundamental background needs to be sufficiently strong to cause the euro to increase by 750 points in a matter of weeks. 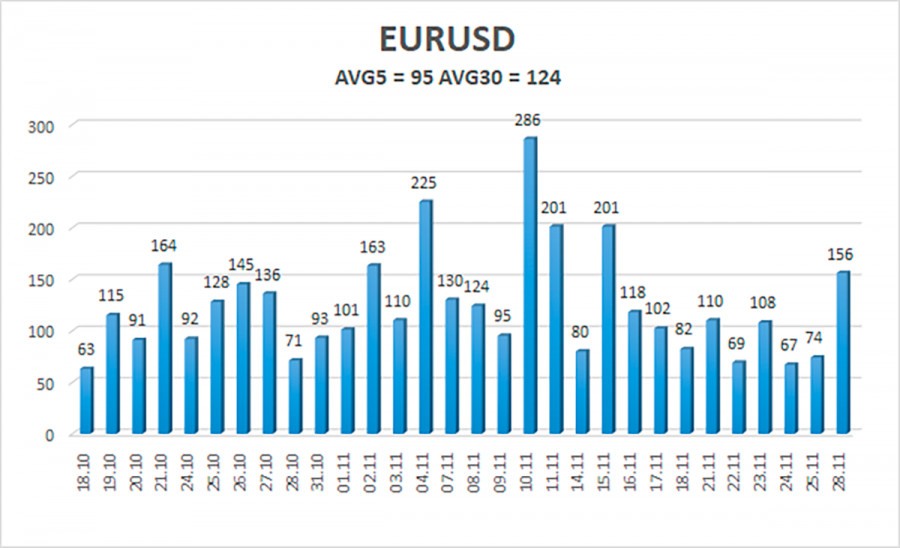 As of November 29, the euro/dollar currency pair's average volatility over the previous five trading days was 95 points, considered "high." So, on Tuesday, we anticipate the pair to fluctuate between 1.0332 and 1.0521 levels. The Heiken Ashi indicator's turning downward indicates a new phase of the corrective movement.