Forex Analysis & Reviews: Will gold fall for the Fed's entreaties?

The external calm often hides internal tension. Despite gold's stabilization near $1,750 an ounce, we can't say the periods of turbulent XAUUSD quotes are far behind. The precious metal paused ahead of Federal Reserve Chairman Jerome Powell's speech and is trying to see if he can do what the other FOMC members failed to do. Can he use hawkish rhetoric to persuade stock indices to fall and the U.S. dollar to strengthen? Both are fundamentally important to gold.

As a rule, when evaluating the prospects for XAUUSD, the dynamics of the USD index and Treasury bond yields are analyzed. The fall of the first of them below 106, according to DeCarley Trading, will contribute to the continuation of the peak to 98, raising the quotes of the precious metal significantly higher. Many factors have already been factored into the U.S. dollar, including a 5–5.25% federal funds rate ceiling and a shallow recession that the U.S. economy will plunge into in the second and fourth quarters of 2023, according to Barclays.

Dynamics of gold and US dollar 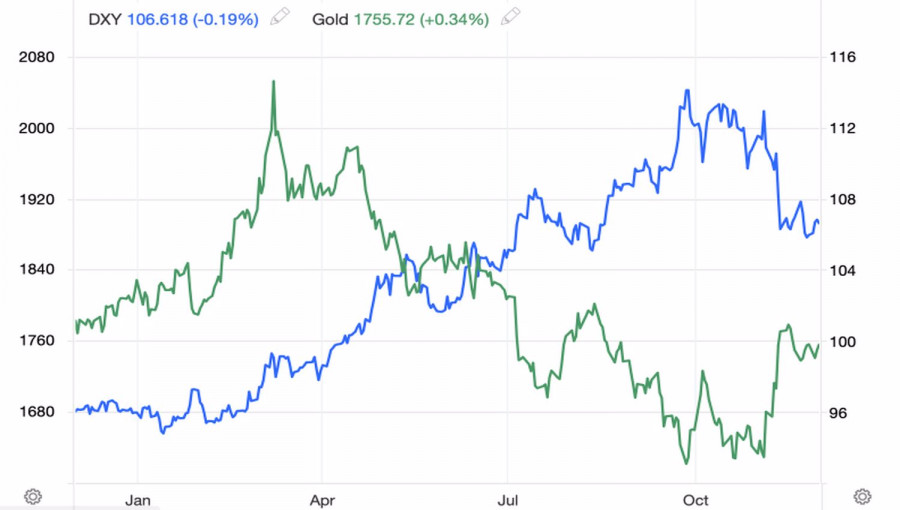 At the same time, capital flows also affect the value of gold. Queen Anne's Gate Capital says the current rally in XAUUSD is due to an outflow of money from the crypto market. In 2020, investors actively invested in ETFs and crypto assets. As a result, specialized exchange-traded funds grew from 80 million ounces to 110 million ounces. By now, they have fallen to 95 million ounces. Many are still under water, that is, in losses. They will take advantage of the rise in gold to close their positions. If ETFs shrink another 20 million ounces, the precious metal will plummet to $1,300.

The collapse of cryptocurrency broker FTX accelerated the collapse of BTCUSD, and money poured into gold, but a stabilization of bitcoin will reverse that process. 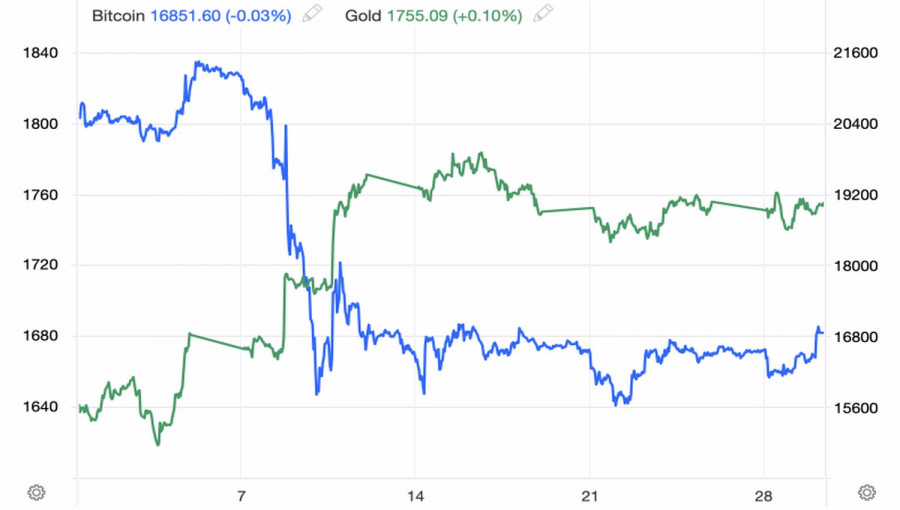 However, if the capital outflow from specialized exchange-traded funds stops and the demand for physical assets in Asia starts to fall, the downward trend of XAUUSD can be considered broken not only technically but also fundamentally. The fact is that, in an upward trend, gold tends to flow from the East to the West and vice versa during downturns—from China and India to the USA and Europe.

In this regard, a sharp drop in October imports of China's precious metal from Hong Kong to 18.7 tons, which is 45% less than in September, indicates a decrease in demand. However, Commerzbank believes that the dynamics of the indicator was affected by restrictions imposed by Beijing due to COVID-19. According to customs data from Switzerland, gold exports to China in October decreased slightly from 44 to 43.7 tons. 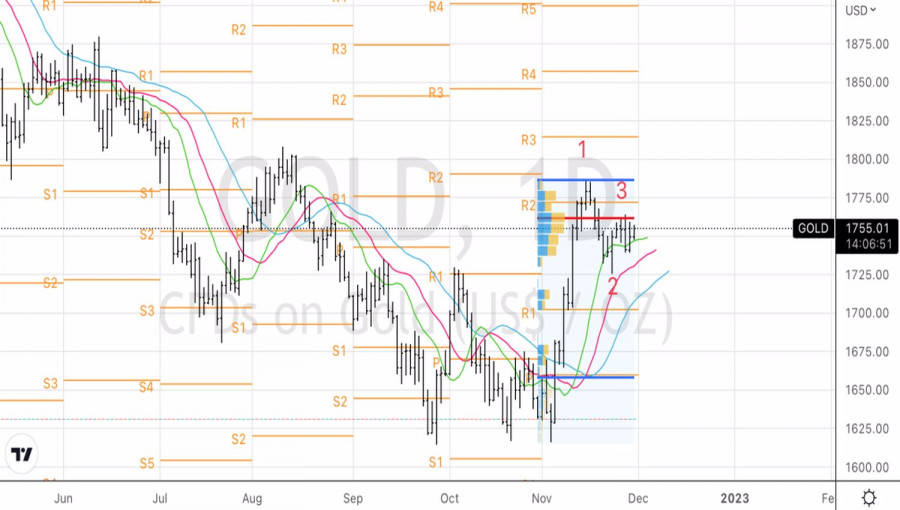 In the near term, the fate of XAUUSD will be affected by Powell's speech and the U.S. labor market report for November.

In technical terms, the 1-2-3 pattern can work out on the daily chart of the precious metal. However, for this, quotes must fall below $1,725, which will be a reason for selling. A fair price break of $1,762 per ounce is more likely to be a reason to buy.