Forex Analysis & Reviews: How to trade GBP/USD on December 2, 2022. Simple trading tips and analysis for beginners 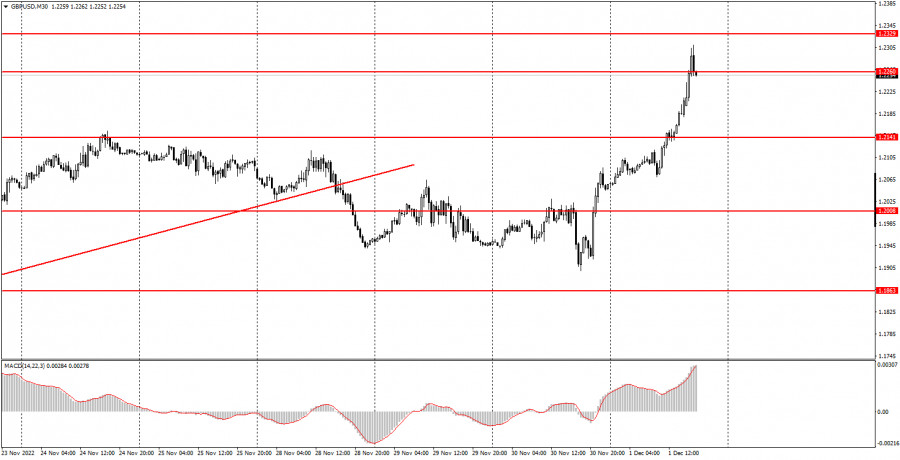 GBP/USD surged on Thursday. The pair gained at least 200 points during the day. And this happened despite the fact that Britain had only released an index of business activity in the manufacturing sector, which slightly increased but still remained below the key level of 50.0, while more or less interesting reports were released in America just a couple of hours ago. So why was the pound rising all day? We already mentioned that Federal Reserve Chairman Jerome Powell's speech on Wednesday was very important, but essentially he did not say anything that was particularly new. And certainly there was much less dovish information from him than that of hawkish. Anyway, in any case there was no reason and grounds for the dollar to fall by 360 points, if you start with yesterday evening. However it rose anyway, so now we can speak about restoring the uptrend, the normal correction didn't work out, and the pair's movement during the last weeks barely corresponds to the notions of "logic" and "reasonability". 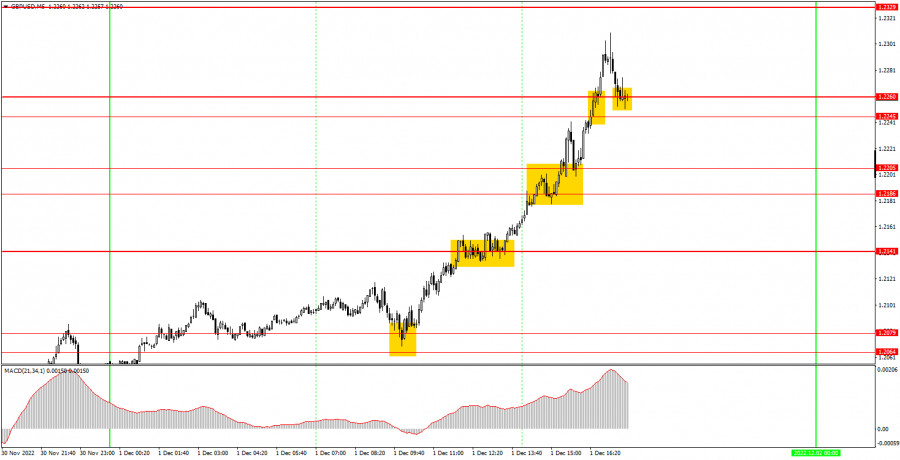 Trading signals on the 5-minute chart were just fine since the pair was moving only in one direction all day. The first buy signal was near the area of 1.2064-1.2079 and, in fact, it was the only signal, which beginners could work out, because all the following signals were also for long positions. The pair passed over the levels of 1.2141, 1.2186, 1.2205, 1.2245, 1.2260, and stopped only at the last one. Traders could close the long position there. The profit was about 170 pips. Once again, please remember that trading is easy and simple when the pair is trading volatile and is exhibiting a trend.

The pair started to form a downtrend on the 30-minute time chart, and quickly finished its "ordeal" with it. The pair grew by 360 points in less than a day, breaking the current technical picture, and with it a new, incipient downtrend. The most interesting thing is that we don't know if the pound will still continue to rise. On the 5-minute chart on Friday, it is recommended to trade at the levels 1.1716, 1.1793, 1.1863-1.1877, 1.1950-1.1957, 1.2064-1.2079 and 1.2141. As soon as the price passes 20 pips in the right direction, you should set a Stop Loss to breakeven. On Friday, there will be no important events in the UK, but at least in the US we have the NonFarm Payrolls report, which is very important and may provoke a new, strong, but possibly illogical market reaction.