Judging by the US dollar depreciation, the market was waiting for both a decline in the unemployment rate and a jump in the number of new jobs in the non-farm sector. Just after it became known that the unemployment rate remained unchanged and the pace of new jobs creation slackened, market participants became disappointed and continued to sell off the greenback. The fact is that traders expected such results. In other words, the data met the main forecasts. Thus, the situation could be explained by some other factors. The fact is that the number of unemployment claims has been rising for the second month in a row. That is why the unemployment rate should also increase. Instead, it remains unchanged, thus causing a lot of concerns about the accuracy of the data provided by the US Labor Department. Against the backdrop, investors decide to avoid buying the greenback. What is more, the US has launched the reindustrialization process, creating conditions for the placement of industrial enterprises on its territory. This, in turn, is boosting the necessity of labor forces. However, according to the official data, the US is suffering a deficit in the labor force. The world's largest industrial companies may invest funds in the creation of new enterprises in the US, but they are unlikely to get the income they expect. It means that the payback period of such investments could be unpredictably longer. This, in turn, is increasing the negative impact on the US currency. 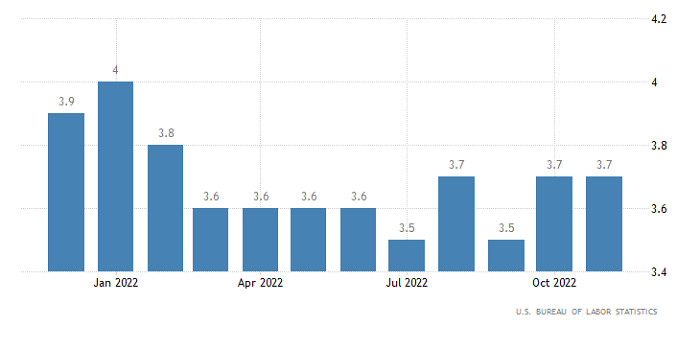 Today, the US and the UK are going to disclose their final PMI data. However, the reports are unlikely to affect the market situation since they are expected to meet preliminary estimates, which have been already priced in. That is why traders are likely to switch their attention to the overbought conditions of the pound sterling. In this light, the currency has every chance to bounce, whereas the US dollar could show a considerable increase.

After a short-lived pause near 1.2300, the pound/dollar pair resumed gaining in value. As a result, the pair broke the resistance level and consolidated above it.

On the four-hour and daily charts, the RSI technical indicator is hovering within the overbought area, which corresponds to the current inertial movement.

On the same time frames, the Alligator's MAs are headed upwards, which points to the prevailing bullish sentiment among traders. 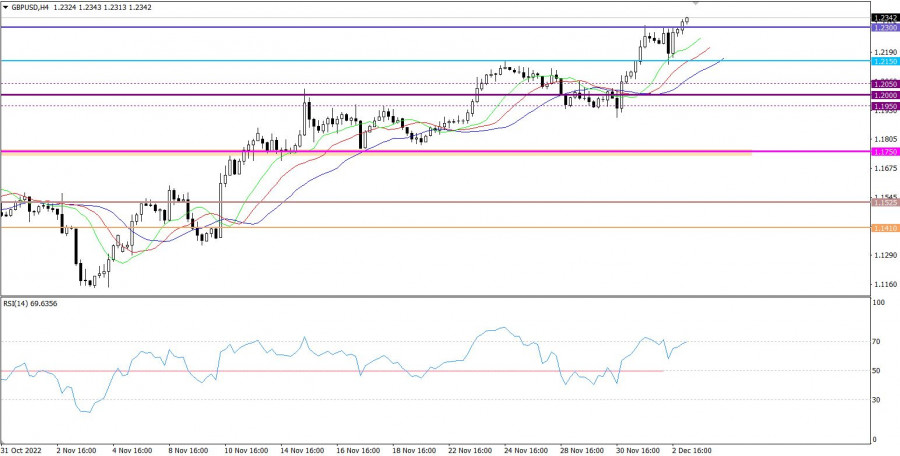 Although the British pound is becoming more and more overbought, we still see an inertial movement, which may force traders to ignore technical signals. In this case, the price settlement above 1.2300 may lead to a rise in the volume of long positions, thus causing further growth.

The downward scenario will become possible only when the price settles below 1.2033 on the daily chart.

In terms of the complex indicator analysis, we see that in the short-term, intraday, and mid-term periods, indicators are providing buy signals amid the upward cycle.

Hot forecast for EUR/USD on 03/01/2023
Given the results of yesterday's European Central Bank meeting, the dollar has nothing to do but rise, but not today, since it could be under pressure later on..
Breaking forecast for GBP/USD on February 2, 2023
The Federal Reserve slackened the pace of the key rate hike. Now, everything depends on the Bank of England, which is raising the benchmark rate a bit more actively.
Breaking forecasts for EUR/USD on February 1, 2023
Today, the eurozone is going to disclose important macroeconomic reports. However, traders are likely to ignore them as everyone will focus only on the FOMC meeting results.
展示更多
Analysis Articles Fundamental Analysis Trading Plan Cryptocurrencies Technical Analysis Breaking Forecast
All Analytics
Breaking Forecast Trading Plan Cryptocurrencies USD/RUB Russian Economy Video Analysis
Trading Instruments
EURUSD GBPUSD USDCHF USDCAD USDJPY AUDUSD EURGBP EURJPY NZDUSD EURNZD Silver Gold #CL #USDX COVID-19 Bitcoin