Today, American trading platforms are closed: Independence Day is celebrated in the US. Therefore, the dynamics of today's trading should be viewed through the prism of this circumstance. Traders are in no hurry to open large positions, moving mainly by the inertia of Friday trading. This situation has developed in almost all dollar pairs of the "major group", and the EUR/USD pair is no exception here.

Let me remind you that at the end of last week, the bears of the pair actively tried to settle within the third figure. For two days – on Thursday and Friday – bears overcame the support level of 1.0400, indicating the strength of the downward trend. But the complexity of the situation lies in the fact that in order to move further down, traders need to overcome the 5-year price low, which corresponds to the 1.0339 mark. In this case, they will be able to fall to the bottom of the 3rd figure, where 20-year lows are already located. This is not an easy task, as it requires appropriate information support. Whereas the fundamental background let down the dollar bulls last week. 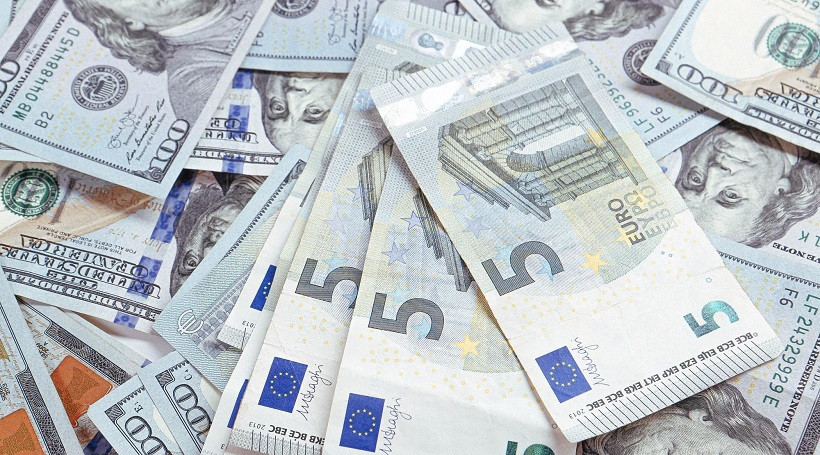 On the one hand, many fundamental signals signaled the priority of the downward movement. First of all, I was surprised by German inflation, which unexpectedly slowed down its growth. For example, the harmonized consumer price index (on a monthly basis) was in negative territory for the first time since January last year. And the other components of the release disappointed, being in the red zone. Then the pan-European inflation also disappointed: despite the growth of the CPI, the core index came out at around 3.7% with a forecast of growth to 3.9%. The very fact of slowing growth is important here, for the first time in the last four months. The latest pan-European producer price index also came out in the red zone, falling short of the forecast values. While Germany's trade balance showed a deficit of 1 billion euros.

All these factors allow EUR/USD bears to develop a downward attack. If not for one "but": the slowdown in the growth of the base PCE. The report published last week on the growth of the price index of personal consumption expenditures showed that the most important inflation indicator for the Federal Reserve has been showing downward dynamics for the third consecutive month.

In itself, this fact is not critical for the US currency. Judging by the rhetoric of the Fed representatives (who have the right to vote in the Committee), the central bank will raise the interest rate again by 75 points in July. But in the context of the EUR/USD pair, this inflationary release played a decisive role, at least in terms of medium-term prospects. I repeat – for a confident downward breakthrough, the bears of the pair need a powerful informational occasion that would allow traders not only to approach the middle of the 3rd figure, but also to overcome the five-year price low. If the underlying PCE, contrary to forecasts, showed growth again, such a scenario could well become a reality. However, the most important inflation report summed up the dollar bulls: the bears hurried to lock in profits, thereby provoking a corrective pullback to the area of the 4th figure.

As a result, a stalemate has developed: bulls of EUR/USD are not able to develop a large-scale counteroffensive due to weak German data and a contradictory report on inflation growth in the eurozone, while the bears cannot gather the strength to overcome the powerful support level of 1.0339. A temporary price range has been formed, within which the pair will trade at least until Wednesday, when the minutes of the June Fed meeting will be published (and most likely – until Friday, when Nonfarm will be made public). The lower limit of this range is the 1.0370 mark, which is an impregnable price outpost. Over the past six weeks, bears have repeatedly tried to overcome it, but in vain. But the upper limit of the echelon is the price of 1.0520 – this is the average line of the Bollinger Bands indicator on the D1 timeframe.

In my opinion, longs for the pair still look risky, given the European Central Bank's very cautious position regarding further steps after the July rate hike. Against the background of the Fed, which is preparing for another 75-point rate increase, the ECB is acting too slowly and hesitantly. Therefore, it is advisable to use any corrective pullbacks on the pair as an excuse to open short positions.

The technical picture also indicates the priority of the downward movement. The EUR/USD pair on the D1 timeframe is traded between the middle and upper lines of the Bollinger Bands indicator, as well as under all the lines of the Ichimoku indicator (including the Kumo cloud), which formed a bearish Parade of Lines signal on the daily chart. The first target of the downward movement is the 1.0400 mark. The main target is 1.0370, which currently serves as a key price barrier.