In November, the market was mainly driven by the expectations of possible changes in the ECB's and Fed's policies. At a particular moment, traders believed that the Fed would slacken its monetary policy tightening, whereas the ECB would remain stuck to its approach. In this case, the key interest rate in Europe would be higher than in the US. The inflation growth in both countries was also pointing to this fact. However, yesterday, it became obvious that in Europe, inflation started slackening quite rapidly. This conclusion was made on the basis of preliminary inflation reports published in Spain and Germany. The situation is more obvious in Spain, which is the fourth largest economy in the euro area. Economists had foreseen inflation to slacken to 7.2% from 7.8%. In fact, it slowed down to 6.8%. In Germany, the main eurozone economy, inflation dropped to 10.0% from 10.4% instead of falling to 10.2%. Judging by the figures, the eurozone inflation figures will be better than expected.

According to the forecast, inflation should decline to 10.3% from 10.6%. In case of a more significant slowdown, investors will revise their expectations of the ECB's further actions. In other words, they may start to wait for the key interest rate cut as early as the beginning of the next year. Thus, the European benchmark rate will remain lower than in the US. This will allow the US dollar to launch a long-lasting uptrend. That is why today, the greenback may start its correction and return to parity. 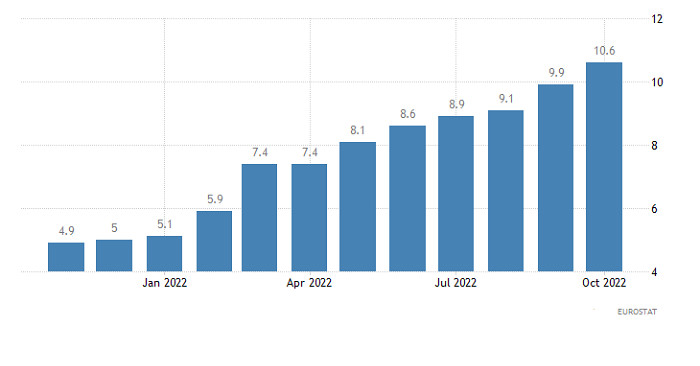 Yesterday, the euro/dollar pair showed an insignificant decline. It approached the control level of 1.0300, which is acting as support at the moment.

On the four-hour chart, the RSI technical indicator is near the mid line 50, which points to stagnation. On the daily chart, the indicator is ignoring fluctuations in the price, remaining in the upper area of 50/70. This points to the bullish sentiment among traders.

On the four-hour chart, the Alligator's MAs are intersecting each other, which corresponds to stagnation. On the daily chart, MAs are headed upwards, which reflects the overall bullish sentiment of this week. 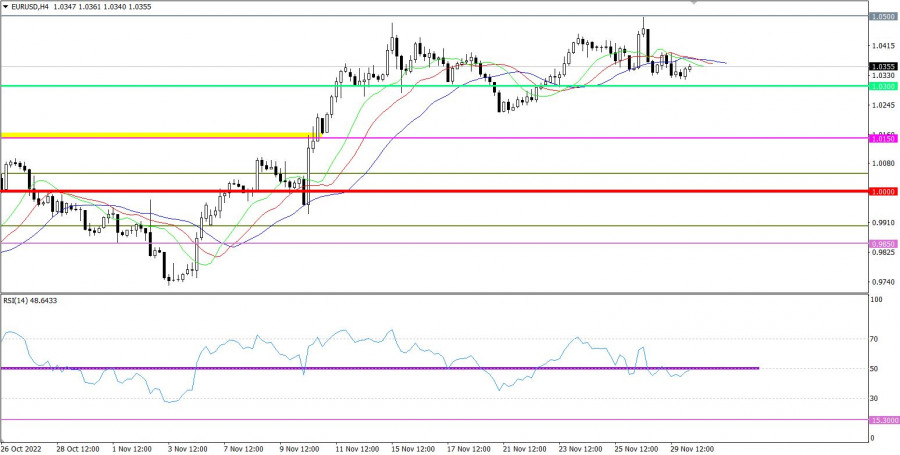 Under the current conditions, the control levels are located at 1.0300 and 1.0500. The pair is hovering between these levels. It is quite possible that the price settlement beyond either limit on the four-hour chart will indicate its future direction. Thus, traders may choose a rebound strategy.

In terms of the complex indicator analysis, we see that in the short-term and intraday periods, technical indicators are providing mixed signals amid the sideways movement. In the mid-term period, the indicators are pointing to an upward cycle.

Breaking forecast for EUR/USD on February 7, 2023
The eurozone retail sales data had a negative effect on the euro. The currency became even more oversold.
Breaking forecast for GBP/USD on February 6, 2023
A slump in the pound sterling was quite expectable and should not cause any questions. However, there is a necessity for a rebound since the US dollar is overbought.
Hot forecast for EUR/USD on 03/01/2023
Given the results of yesterday's European Central Bank meeting, the dollar has nothing to do but rise, but not today, since it could be under pressure later on..
Mostrar más
Artículos de análisis Análisis fundamental Plan de negociación Criptomonedas Análisis técnico Pronóstico de última hora
All Analytics
Pronóstico de última hora Plan de negociación Criptomonedas USD/RUB Economía rusa Análisis en vídeo
Instrumentos de negociación
EURUSD GBPUSD USDCHF USDCAD USDJPY AUDUSD EURGBP EURJPY NZDUSD EURNZD Silver Gold #CL #USDX COVID-19 Bitcoin