07.07.202202:33 Forex Analysis & Reviews: Overview of the GBP/USD pair. July 7. Boris Johnson's subordinates are fleeing the government due to yet another scandal. 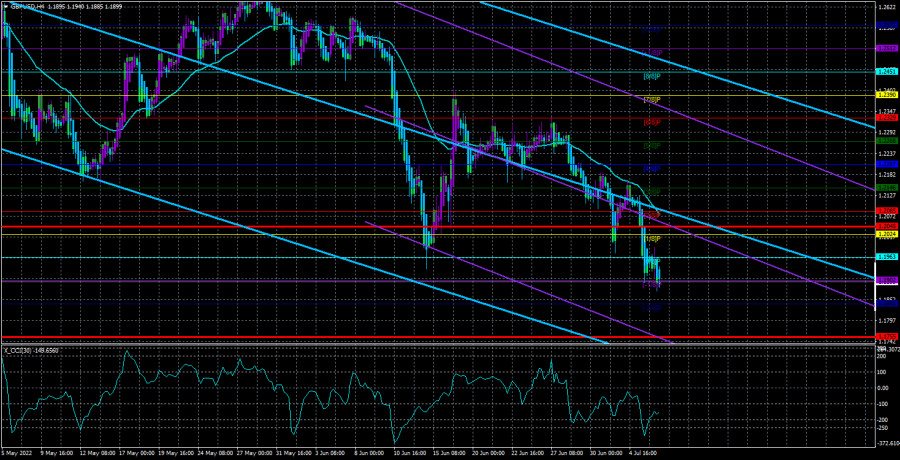 The GBP/USD currency pair on Wednesday avoided the fate of the European currency but, at the same time, could not even adjust and is inclined to continue falling. We have already said more than once that the euro and the pound have been moving almost identically in recent months, which indicates a high degree of dependence of market sentiment on the dollar and the fundamental background of the United States. Maybe the pound does not have as many reasons to fall as the euro, but what else is left for traders if the UK has been in a constant "political crisis" for several years? At the same time, from time to time, this crisis weakens, and everyone forgets about it for a while. Therefore, when Boris Johnson gets into another "dark" story or scandal, subordinates start running away from him again, and the opposition again starts calling on the prime minister to resign. However, we will talk about this a little bit below.

I would also like to note that Brexit for the UK can turn into much bigger problems than Boris Johnson and Theresa May saw a few years ago. For more than a year, Scotland has been demanding permission from London to hold a second independence referendum. Naturally, it is unlikely that she will receive it because Boris Johnson will not lose a third of the UK territory with his own hands. Moreover, no one will forgive him for the loss of Scotland. However, Edinburgh can also use a method that has become very popular worldwide in the last twenty years. This method is called "we will hold a referendum, and on its basis, we will make a decision." If purely hypothetically, the Scottish people vote to secede from the United Kingdom and join the European Union, then Nicola Sturgeon will have an iron trump card in front of the whole world - the Scottish people have decided so. If London refuses to recognize the referendum results, it will be at a disadvantage. As it turns out, it will go against democracy and keep the whole country, the entire people, in shackles.

Boris Johnson – not a day without scandals.

Johnson could have resigned just a couple of weeks ago. However, the Conservative Party could not gather enough votes to declare a vote of no confidence in the Prime Minister. Johnson remained in office and received immunity for 12 months from any new claims against him. Recall that in the last few months, Johnson was not called to resign only by the lazy. The "coronavirus parties" scandal had a high resonance in British society and politics.

Nevertheless, Johnson refused to leave his post voluntarily. Last week, it became known that one of the senior members of the Conservative Party, Chris Pincher, in a state of alcoholic intoxication, staged a brawl and harassed several men in one of the British pubs. It immediately became clear that Boris Johnson knew about Pinscher's "sins" back in 2017 when he was a person involved in a parliamentary investigation into harassment. Pincher himself resigned after this story, but Boris Johnson again pretended that nothing terrible had happened.

Finance Minister Rishi Sunak and Health Minister Sajid Javid resigned instead. Both stated that they had lost confidence in the current Prime Minister and could not remain in their posts for ethical reasons. Recall that this is not the first time that members of the Cabinet of Ministers of the British Parliament have either resigned themselves or were dismissed by Johnson. Whatever it was, all these events, all these scandals and "stories" affect not only the political ratings of Boris himself, who is already minimally likely to be re-elected for a second term, but also the ratings of the entire Conservative Party, which risks losing the next parliamentary elections with the same crash as a couple of years ago they were lost by Labor. Well, the British pound may not react to all these events, but its cumulative fundamental background remains such that it is very difficult to want to buy it now. 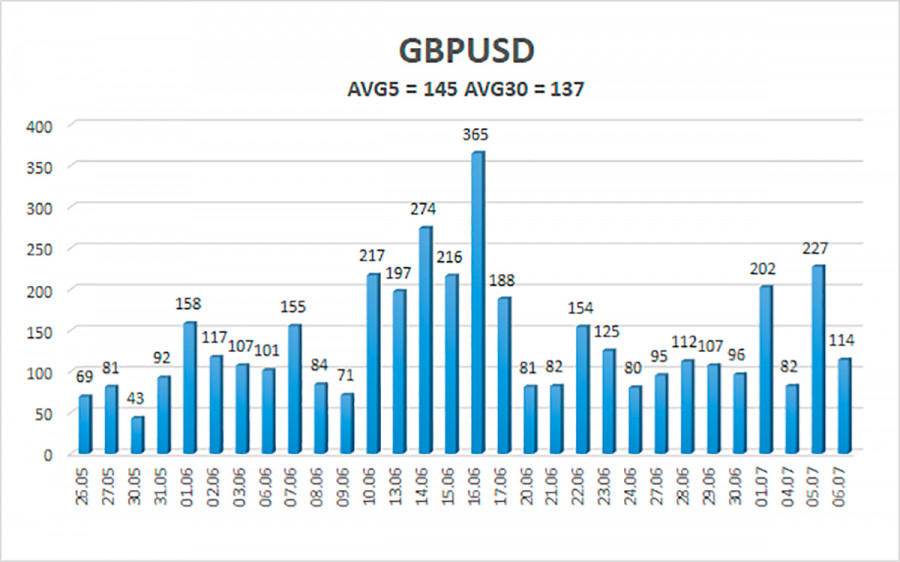 The average volatility of the GBP/USD pair over the last five trading days is 145 points. This value is "high" for the pound/dollar pair. Therefore, on Thursday, July 7, we expect movement inside the channel, limited by the levels of 1.1755 and 1.2045. The upward reversal of the Heiken Ashi indicator signals a round of upward correction.

The GBP/USD pair continues its downward movement in the 4-hour timeframe. Therefore, at the moment, you should stay in short positions with targets of 1.1841 and 1.1755 until the Heiken Ashi indicator turns up. Buy orders should be opened when fixed above the moving average with targets of 1.2146 and 1.2207.

Linear regression channels – help to determine the current trend. If both are directed in the same direction, then the trend is strong.

CCI indicator – its entry into the oversold area (below -250) or into the overbought area (above +250) means that a trend reversal in the opposite direction is approaching.