Forex Analysis & Reviews: Overview of the GBP/USD pair. November 26. Thanksgiving is not a reason to rest. Trade negotiations on Northern Ireland will drag on for several months. 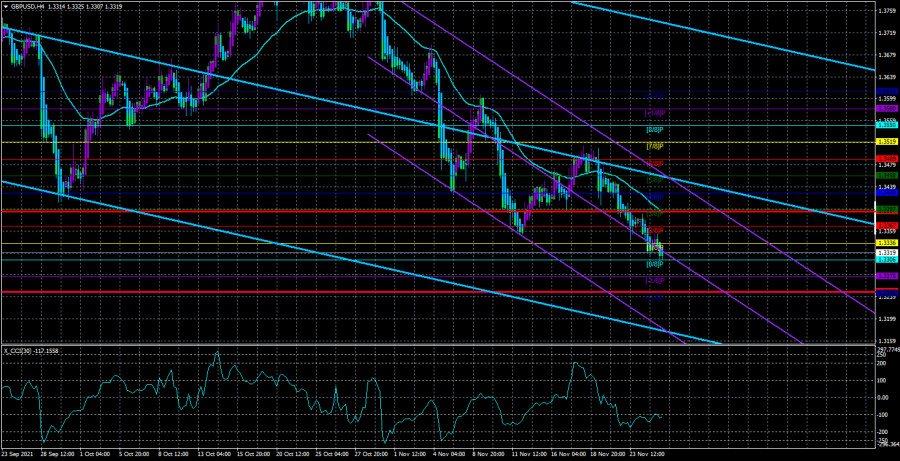 The GBP/USD currency pair continued to decline slowly on Thursday. If the European currency paused at least for a while, which could be associated with Thanksgiving in the United States, then the pound did not consider it necessary to do downtime. Therefore, yesterday the lows of the year were once again updated around the 33rd level. The technical picture for the pound/dollar pair is now approximately the same as for the euro/dollar pair. All indicators are pointing downwards, signaling a downward trend. Market participants are not waiting for "macroeconomics" or "foundations" to get the necessary grounds for new sales of the pound for dollars. From time to time, of course, there are corrections, but in general, the fall of the pair is very strong. We have also already discussed the reasons for this fall in recent articles. First, it should be clearly understood that both the euro and the pound are falling now. Synchronously. This suggests that most of the reasons lie overseas, and not in the UK or the European Union. Second, most of the possible reasons for the dollar's growth have been known for a long time, but the US dollar has become more active only in the last few weeks or months. For most of 2021, it was hardly adjusted against the global upward trend of 2020. Thus, most likely, the matter is in the mood of the market, which believes that the Fed will continue to tighten monetary policy, curtail the QE program. In the same UK, for comparison, there is only talk about this. Yes, two members of the monetary committee voted for a rate hike at the last meeting, and three voted for curtailing the stimulus program. But who said that in the next month or two their number will grow to five, which will allow tightening monetary policy? Recall that the situation in the UK is also not the most favorable with the "coronavirus" and with the economy after Brexit. Britain remains in second place in the world in the number of new cases of the disease – more than a million in the last 4 weeks. Even in Germany, where the incidence rates are already twice as high as the peaks of the third and second "waves", and the Minister of Health is forced to threaten the country's residents with death if they do not get vaccinated, less.

In recent articles, we have repeatedly mentioned the problematic situation that has developed between Britain and the EU against the background of the "Northern Ireland Protocol". Therefore, everyone is now interested in answers to the following questions:

1) How long will the new negotiations between London and Brussels last?

2) What are the chances of a peaceful settlement of the dispute?

Even if this topic does not directly affect the exchange rate of the pound sterling at this time, but, you must agree, when threats begin to sound from both sides, in particular about a trade war, it cannot but strain market participants. It would not be enough for the same war to start between the Kingdom and the Alliance as between China and the United States! Meanwhile, the vice-president of the European Commission, Maros Sefcovic, said that negotiations are likely to continue next year. This means that no one believes in a speedy resolution of the problematic situation along the Northern Ireland border. Maros admitted that he was too optimistic when he said that negotiations on the "Northern Ireland protocol" could be completed before Christmas. "I think that if our colleagues from the UK have a clear desire, these problems could be solved as soon as possible. But looking at how far we have come in the last four weeks, and at the level of detail that our British colleagues want to discuss, I think we will not be able to resolve all issues before the end of the year," the vice-president of the European Commission said. Thus, it seems that a new multi-month series called "UK-EU Negotiations" is waiting for us. Or rather, it's the second season. Or the third one already. One way or another, it should still be remembered that it is in the interests of both sides to agree amicably. Therefore, so far we believe that a trade war will be avoided. 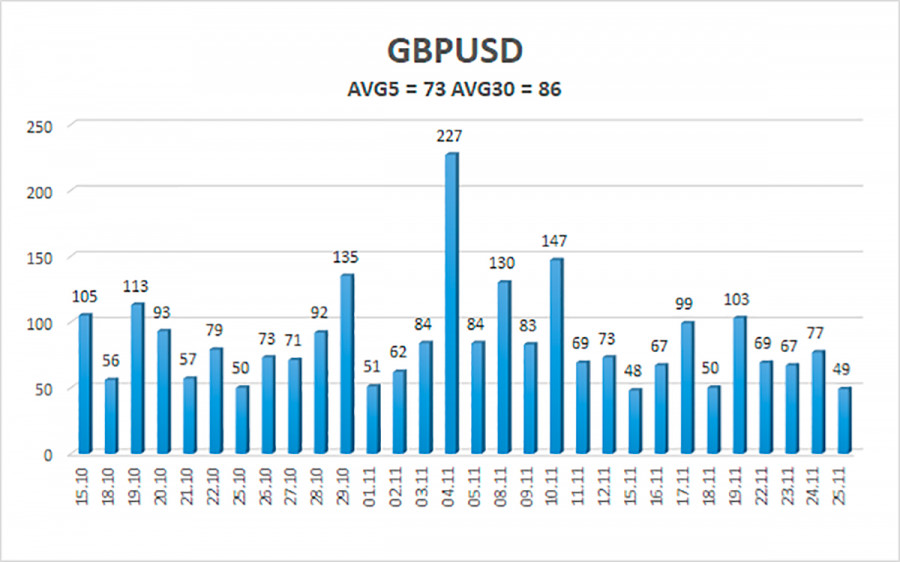 The average volatility of the GBP/USD pair is currently 73 points per day. For the pound/dollar pair, this value is "average". On Friday, November 26, we expect movement inside the channel, limited by the levels of 1.3248 and 1.3394. The upward reversal of the Heiken Ashi indicator signals a round of upward correction.

The GBP/USD pair continues to move downwards on the 4-hour timeframe. Thus, at this time, it is necessary to remain in short positions with the targets of 1.3275 and 1.3248 levels until the Heiken Ashi indicator turns upwards. Buy orders can be considered in the case of a confident consolidation of the price above the moving average with targets of 1.3428 and 1.3458 and keep them open until the Heiken Ashi turns down.