Forex Analysis & Reviews: AUD/USD in a range. Is the bullish correction near its end?

The dollar has strengthened slightly since the start of Thursday's trading. At the time this article was written, the DXY dollar index was near 105.35, 30 points above the closing price but also 20 points below Wednesday's opening price. In other words, the DXY futures were trading within a range, the previous day's high and low, and the previous two trading days. This is partly because European countries are celebrating a Catholic holiday (Immaculate Conception of the Virgin Mary): banks and stock exchanges there are closed. At the same time, traders are still thinking about the important data coming out from the US on Friday and Tuesday that caused more uncertainty regarding the USD dynamics.

This data confirms the resilience of the U.S. economy in the face of tighter monetary policy. This means that the interest rate may be raised again by 0.75% at the December 13-14 Fed meeting. Prior to those reports, and following Fed Chairman Jerome Powell's statements a week earlier about the possibility of a slowdown in the pace of interest rate hikes, the CME FedWatch Tool shows about an 80% chance of a 50 basis point rate hike in December (rather than 0.75%).

Now doubts concerning the Fed's actions in this regard have increased again. Take note that the Fed staff keeps silent before next week's meeting (December 13-14), and the market has to guess what will happen next.

At the same time, the Fed understands that "the fight against inflation is far from over," and the key question - how high rates should be raised and for how long - remains unanswered. As we previously mentioned, there is still intrigue about what the Fed is going to do next, leaving the markets unsettled and undecided.

Next week generally promises to be very turbulent: besides the release of important macro data, four major world central banks (US, Switzerland, UK and eurozone) will announce their decisions on their monetary policies.

Before the end of the week, the weekly report from the U.S. Department of Labor on unemployment claims, manufacturing in November, and the preliminary consumer confidence index from the University of Michigan.

Also, the National Bureau of Statistics of China will release the country's inflation report on Friday. The CNY may also have an impact on other Asia-Pacific currencies, particularly on the Australian dollar. As for the latter, as we know, this week the Reserve Bank of Australia expectedly raised its interest rate by 0.25%, thus preferring to move in smaller steps than other major global central banks in the fight against high inflation.

Given the progress towards full employment and data on prices and wages, RBA Governor Philip Lowe has said that a flexible inflation targeting framework has been, and remains, appropriate for the bank. "The Board remains resolute in its determination to return inflation to target and will do what is necessary to achieve that," he said. "The Board expects to increase interest rates further over the period ahead," Lowe said back in the summer of this year. And so far, the RBA is moving along just that path. 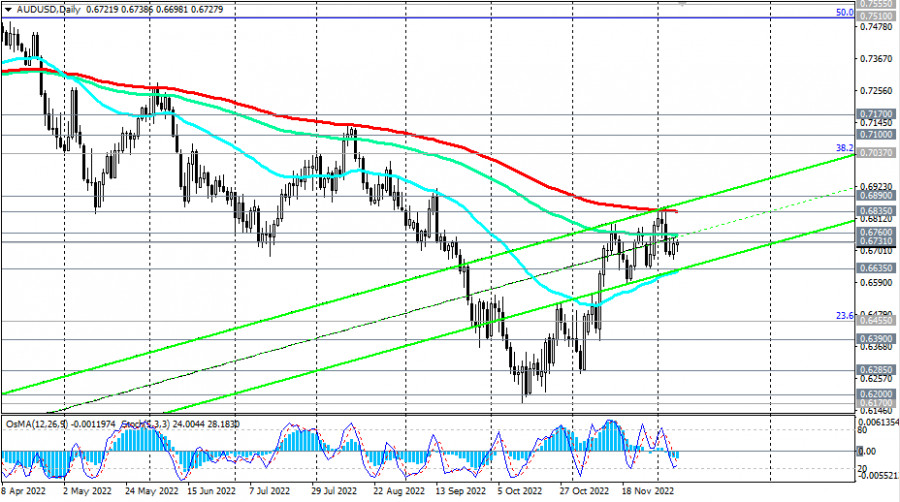 In response to the decision announced last Tuesday to raise interest rates by 0.25%, the Australian dollar was quite cautious, and so it closed the day in negative territory against the USD. Nonetheless, the pair gained on Wednesday, but mainly due to the weaker USD, and on Thursday it was trading in a narrow range near the previous day's closing price and the level of 0.6731, which is an important short-term resistance level. Since the middle of last month, the pair has been traded mainly in a range between 0.6635 and 0.6835. Crossing this range in one direction or the other might determine the pair's further movement. In general, despite the bullish correction since mid-October, the global downtrend is prevailing. This is the reason why trading strategies for AUD/USD should be set up.