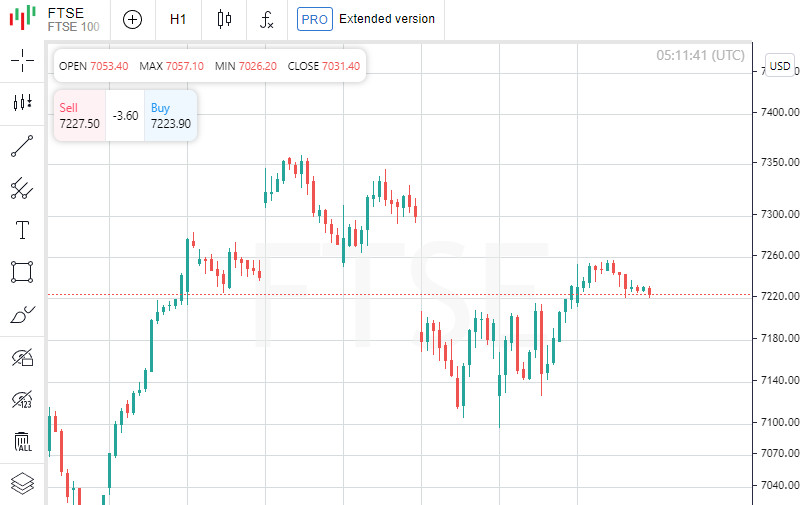 The European equity markets index rose 0.8%, while the UK FTSE index climbed more than 1%, helped by gains in oil and gas stocks.

Oil fell $1 a barrel earlier on Monday on worries about the global economic outlook, but declines in production from the Organization of the Petroleum Exporting Countries (OPEC), unrest in Libya and sanctions on Russia outweighed those concerns.

Ecuador's oil production has been hit lately by civil unrest, and a strike in Norway could cut supplies this week.

Steven Brennock, a spokesman for oil broker PVM, said the growing supply disruption was exacerbated by a possible shortage of spare capacity from Middle Eastern oil producers. Prices will continue to rise unless new oil hits the markets soon.

A survey of analysts on Friday showed that production of 10 OPEC countries in June fell by 100,000 barrels per day to 28.52 million barrels per day. In the meantime, they promised to increase it by about 275,000 barrels.

In June, global equity markets hit 18-month lows amid worries about rising inflation and higher interest rates, but have rallied slightly since then.

The Chinese Blue Chip Index finished the day up 0.7% on the back of a 4.65% gain in the sub-index of medical stocks. Cities in eastern China tightened COVID-19 restrictions on Sunday amid new coronavirus outbreaks.

US S&P 500 and Nasdaq futures shed 0.4% and 0.5%, respectively, as recent weak US data suggests a weaker data in the June jobs report due on Friday. American stock markets are closed today.

The Atlanta Fed's long-awaited Q2 GDP outlook has dropped to -2.1% year-on-year, meaning the country is already in a technical recession.

The jobs report is forecast to point to a slowdown in June job growth to 270,000, with median wage growth declining to 5.0%.

The minutes of the Fed's June meeting, which will be released on Wednesday, are expected to indicate the central bank's inclination to decisively tighten policy. Earlier, the Open Market Committee decided to raise rates by 75 basis points.

The likelihood of another 75 basis point rate hike this month and a rate hike to 3.25%-3.5% by the end of the year is estimated by the market at about 85%.

The US Treasury market is closed today, but their futures market is open and continued to rise. Judging by it, the yield of 10-year bonds is kept at the level of 2.88%; it has fallen 61 basis points since its June peak.

The yield on German 10-year government bonds, the eurozone benchmark, rose 10 basis points to 1.328%. Last week it was falling as investors began to buy protective bonds.

The US dollar slipped 0.06% to 104.99 against a basket of currencies, rebounding from recent 20-year highs driven by its defensive-currency status.

The euro rose 0.13% to 1.0442, off a recent five-year low of 1.0349. The European Central Bank is expected to raise interest rates this month for the first time in a decade, and the euro could be supported if the central bank decides to raise it by half a point at once.

The Japanese yen also attracted defence-currency buyers late last week, pushing the dollar back to 135.48 yen from a 24-year high of 137.01, though it still gained 0.3% on the day.