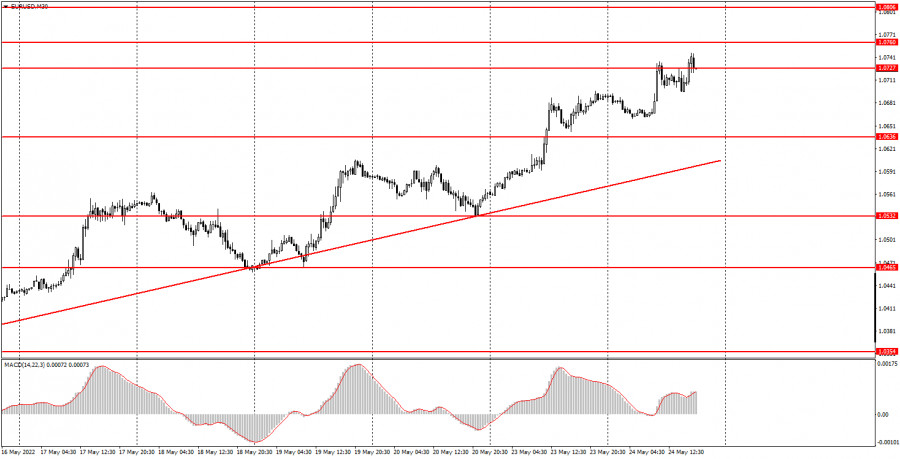 The EUR/USD currency pair continued its upward movement on Tuesday. The pair showed a sharp upward acceleration even at the European trading session, which occurred 2.5 hours before the release of the first reports of the day. Recall that business activity indices in various areas of the European Union were set to be published in the morning. Since these indices turned out to be weaker than forecasts, they could not provoke the euro's growth in any way. Consequently, the market ignored them, as we expected yesterday. To be fair, it should be noted that the deviations of the predicted values from the actual ones were minimal. Nevertheless, the euro has found grounds for growth, which is fully consistent with the technical picture, which is now expressed by an ascending trend line. Consequently, the market is not looking for any reasons to buy the euro for the second consecutive day. It should also be noted that European Central Bank President Christine Lagarde made a speech on Monday, saying that rates could be raised twice in 2022. Given that the ECB rate is currently negative, we cannot call these statements hawkish or "dramatically changing the picture." Consequently, the euro continues to rise on pure technique. 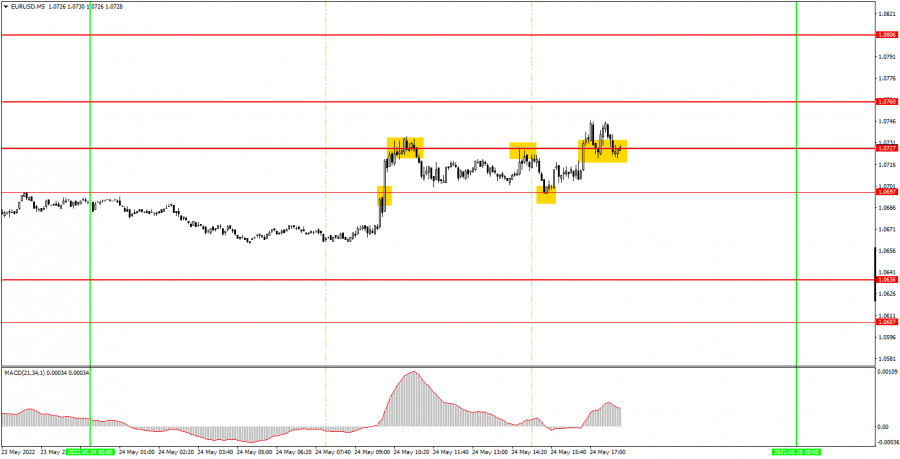 The technical picture on the 5-minute timeframe does not look too good today. By and large, there was only one surge of emotions in the market during the day, and the rest of the time there was almost a flat movement. The pair forcedly marched up to the level of 1.0727 at the beginning of the European trading session, but it was not possible to work out a buy signal near the level of 1.0697, since the price immediately appeared at the target level. This was followed by a rebound from the level of 1.0727, which could have been worked out, but it was not possible to count on high profits, since the level of 1.0697 was very close from below, which eventually kept the pair from falling further. Profit on a short position amounted to a maximum of 10 points. The rebound from the level of 1.0697 could also be worked out, and the price even overcame the level of 1.0727, but could not continue the upward movement, so the deal had to be closed manually in the late afternoon. Profit on it amounted to about 15-20 points. Therefore, it was difficult to get the profit today, but again, a small profit is better than any loss. Moreover, Tuesday's volatility was not the highest, and the movements were not the most trendy.

The ascending trendline continues to be relevant on the 30-minute timeframe. Thus, the euro can still count on growth, which, from our point of view, is purely technical. Nevertheless, it is also quite logical, given how long the euro has been falling. On the 5-minute TF, it is recommended to trade at the levels of 1.0607, 1.0636, 1.0697, 1.0727, 1.0760, 1.0806. When passing 15 points in the right direction, you should set Stop Loss to breakeven. ECB President Christine Lagarde is expected to speak in the European Union, and she delivers a speech almost every day this week. Then there will be data on orders for durable goods in America, but we do not expect a strong market reaction from this report. The Federal Reserve minutes is scheduled for the late evening - the economic report of the federal banks, but it usually very rarely provokes the market to strong movements.