Amid the backdrop of the continued strengthening of the dollar yesterday, the price of gold renewed its 10-month low, and the XAU/USD pair fell to around 1733.00. The dollar continues to dominate the financial market, and today's correction, observed during the Asian trading session, so far only provides additional opportunities to increase long positions on it.

As we noted in our review yesterday, "EUR/USD: Fall to parity is not far off", "risk aversion and the Fed's monetary policy, which remains the tightest among the world's major central banks to date, are the main drivers of the dollar's growth."

Yesterday, after the release of the minutes from the Federal Reserve's June meeting, the DXY dollar index broke through another "round" mark of 107.00, updating its almost 20-year high at around 107.07.

Today (at the time of this article) DXY futures are trading near 106.87, slightly lower during the Asian trading session, but with room for further gains. A repeated breakdown of the 107.00 mark will be a signal to increase long positions in DXY futures with the prospect of growth towards multi-year highs of 121.29 and 129.05, reached, respectively, in June 2001 and November 1985.

From a fundamental point of view, so far everything is going exactly according to this scenario (expectations of further strengthening of the dollar), and the main factor here is the Fed's monetary policy, as we noted above, the most stringent (at the moment) in comparison with other major world central banks.

According to the minutes of the June FOMC meeting released on Wednesday, the Fed will raise rates by 50 or 75 basis points in July: high inflation justifies "restrictive" interest rates, with the possibility of a "more restrictive stance" if inflation stays at high levels. Kansas City Federal Reserve Bank President Esther George was the only one of the 12 "voting" members of the FOMC who did not support the 75 basis point increase in June.

At the same time, the Fed understands the growing inflationary risks, as well as the gradual deterioration of the situation on the labor market.

In this regard, market participants will carefully study today's weekly report of the US Department of Labor with data on the number of claims for unemployment benefits and the monthly report on the US labor market for June, today and tomorrow.

Jobless claims are expected to remain at pre-pandemic lows (230,000 new claims), new Non-farm payrolls were 270,000 in June, and the unemployment rate remained at 3.6%, just as in May, April and March.

In general, the figures can be called encouraging. They talk about the stable state of the US labor market after its collapse in the first half of 2020.

In addition, market participants will pay attention to the speeches of Fed representatives James Bullard and Christopher Waller, hoping to receive confirmation from their side of the Fed's commitment to further tightening of monetary policy, despite the growing risks of a recession in the economy. 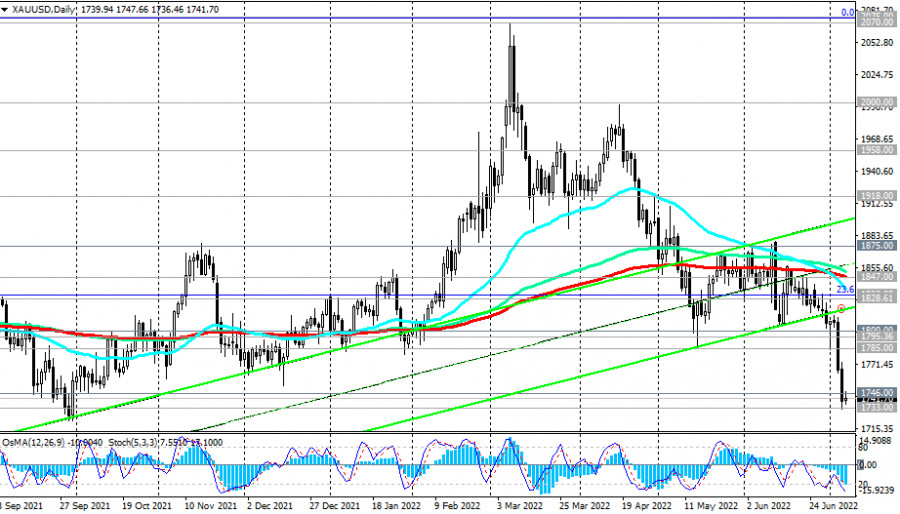 As for the XAU/USD pair, it broke the important long-term support level of 1746.00 yesterday and is trading in a narrow range today, at the time of release of this article - near the mark of 1741.00.

However, despite a strong fall, the price of gold may receive support from possible restrictions on the export of Russian gold to the EU, US, UK and Japan as part of the next package of sanctions against the Russian economy.