Overview of yesterday's trading and tips for EUR/USD

Despite a few tests of 0.9554 during the whole day, I didn't see the convincing confirmation of the right market entry point because each time, the MACD indicator signaled wrong value for the price. Apparently, the support level was not strong enough. In the second half of the day, there were no adequate market entry points as well. 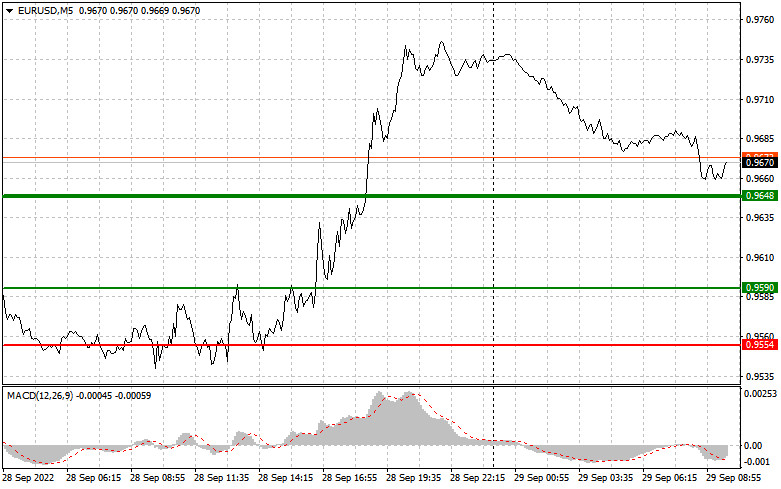 Remarks of European policymakers, especially Christine Lagarde, encouraged the modest recovery of the euro in the first half of the day. Besides, weak data on the US pending home sales pushed the US dollar down. Today, several EU policymakers are due to speak during the European session. Among the speakers are Member of the ECB Executive Board Fabio Panetta, Vice ECB President Luis de Guindos, and Member of the ECB Executive Board and Vice-Chair of the Supervisory Board Frank Elderson. Their remarks will hardly influence the euro's trajectory.

The EU consumer confidence index and Germany's CPI which are due today are the reports of major importance. A decline in consumer morale as well as a surge in Germany's headline inflation are bearish for the euro. In the second half of the day, the economic calendar contains a few market catalysts: the US initial unemployment claims and the revised US GDP for Q2 2022. The GDP is expected to shrink by 0.6% sequentially. Besides, FOMC policymakers such as James Bullard, Loretta Mester, and Mary Daly will make their comments tonight.

Scenario 1. Today, we could buy the euro after its price reaches 0.9687 (plotted by the green line on the chart) with the target at 0.9736. I recommend we should exit the market at 0.9736. Alternatively, we could sell the euro, reckoning a 30-35-pips downward move from the market entry point. We can rely on further growth in EUR/USD on the condition of upbeat macroeconomic data. Importantly, Before you open long positions, make sure that MACD is above the zero level, beginning its growth from it.

Scenario 2. We could also buy the euro today once the price reaches 0.9656, but MACD at the this moment should be in the oversold zone which will cap the downward impulse of the pair and cause the upward price reversal. We could expect the growth towards 0.9687 and 0.9736.

Scenario 1. The euro could be sold after the currency pair reaches 0.9656 (plotted by the red line on the hart). The downward target is set at 0.9601 where I would advise you to exit the market and buy the euro in the opposite direction, bearing in mind a 20-25-pips upward move from the market entry point. EUR/USD will come under selling pressure only on the condition of upbeat US statistics and hawkish remarks from Fed's policymakers. Before you open short positions, make sure MACD is below the zero level, beginning its decline from it.

Scenario 2. The euro could be also sold today in case the price reaches 0.9687, but MACD at this moment should be in the overbought zone which will cap the upward impulse and cause the downward price reversal. We could expect a decline towards 0.9656 and 0.9601. 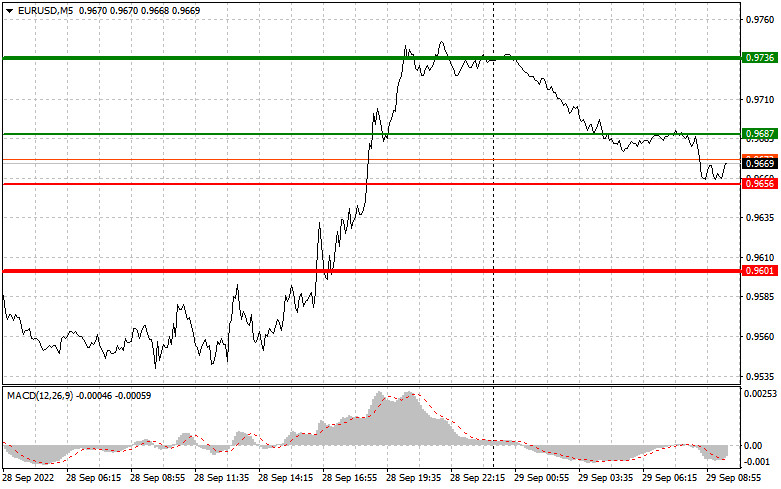 What's on the chart

The thick green line is the target price, since the price is unlikely to move above this level.

The thick red line is the target price, since the price is unlikely to move below this level.

MACD line. When entering the market, it is important to adjust trading decisions to the overbought and oversold zones.

Important: Novice traders need to be very careful when making decisions about entering the market. Before the release of important reports, it is best to stay out of the market to avoid being trading during sharp fluctuations in market quotes. If you decide to trade during the release of news, then always place stop orders to minimize losses. Without placing stop orders, you can very quickly lose your entire deposit, especially if you do not use money management and trade large volumes.

Remember that for successful trading, you need to have a clear trading plan. Spontaneous trading decisions based on the current market situation will inevitably lead to losses for an intraday trader.