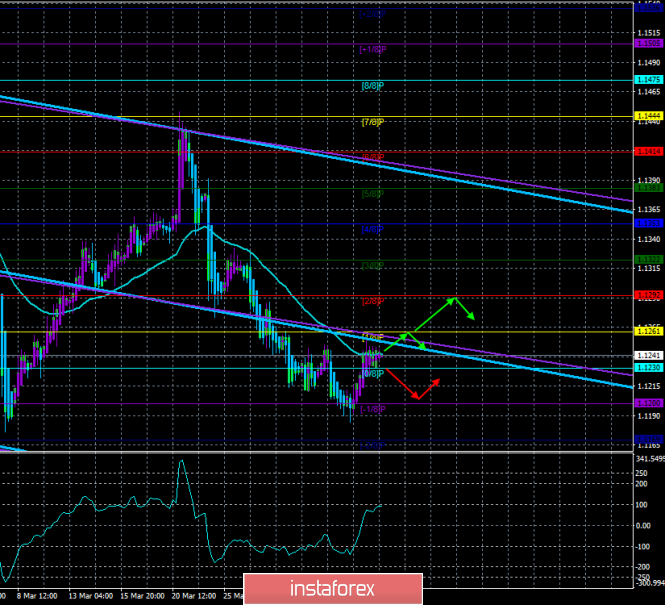 On Thursday, April 4, the currency pair EUR/USD adjusted to the moving average line, but has not yet been able to gain a foothold above it. What happened is what we expected. The pair once again failed to overcome the important support area of 1.1200 - 1.1270 and now, remaining within its limits, has all chances of forming an uptrend. However, this will require at least to overcome the moving average line. Yesterday, macroeconomic statistics helped the European currency. The report on retail sales in the Eurozone showed an increase of 2.8% y / y in February, with lower forecasts, the index of business activity in the services sector and composite employment also exceeded their forecasts. The report from ADP on the change in the number of workers in the private sector amounted to 129,000 in March (compared with a forecast of 170,000), the index of business activity in the ISM services sector was worse than traders expected (56.1 vs. 58.0). The indices of business activity in the services sector and the compound from Markit exceeded their predicted values, but could not cover all the previously obtained negative. Thus, now the pair needs to overcome the moving to rely on the continuation of strengthening. If this does not happen, then the tool can again rush down.

The EUR/USD currency pair has begun to adjust. Thus, it is now recommended to wait for the completion of the current round of correction and resume trading for a fall with the targets at 1.1200 and 1.1169.

Buy positions are recommended to be considered if traders manage to overcome the moving with targets at 1.1261 and 1.1292. In this case, the trend in the instrument will change to ascending, and the euro will have chances for strengthening.

The lower linear regression channel is the purple lines of the unidirectional movement.