Analisis Forex & Kajian: EUR/USD: plan for the American session on June 5. Weak inflation and retail sales stopped the growth of the euro

The buyers tried to continue the growth of the European currency in the first half of the day, however, weak reports on inflation and the reduction of volume of retail sales has led to a sharp drop in the euro against the dollar. At the moment, it is best to return to long positions after updating the new support level in the area of 1.1241, provided that there is a false breakdown or a rebound from a larger area of 1.1200. The main task of the bulls by the end of the day will be to update the resistance of 1.1286, which will retain the upward potential in the pair and lead to the update of the highs in the area of 1.1333.

Sellers returned to the market after weak reports, and at the moment, their goal is the support of 1.1241, which will be the first profit taking on short positions. The main task for the second half of the day will be the breakdown of this level, which will allow collapsing EUR/USD in the area of the minimum of 1.1200, where I recommend fixing the profit. In the case of euro growth scenario, after weak data on the ISM index for the non-manufacturing sector of the United States, you can count on short positions from the resistance of 1.1286 or from a new high of 1.1333.

Trading is conducted in the area of 30 and 50 moving averages, which indicates a slowdown in the upward trend of the euro.

Support will be provided by the lower limit of the indicator in the area of 1.1241, a breakthrough of which may increase the pressure on the euro. 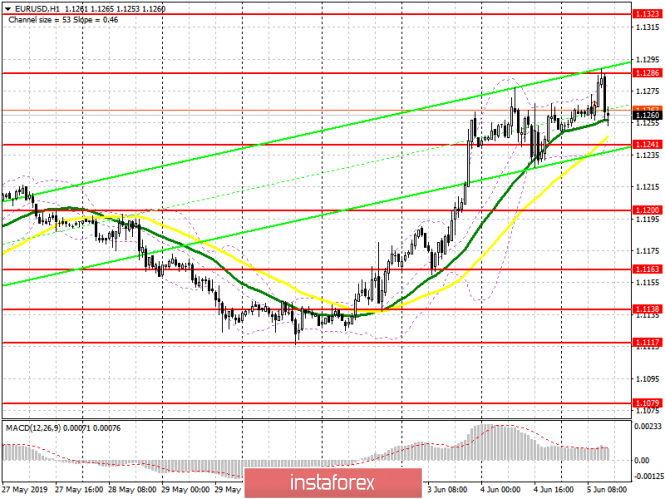