Dakar 2022: Halfway through, Loprais is closing on his rivals

In the sixth stage of the 2022 Dakar Rally, Ales Loprais and his crew finished in fourth place. Just before a scheduled rest day, they have managed to reduce the gap to their competitors ahead by several minutes. Including those on the podium positions. 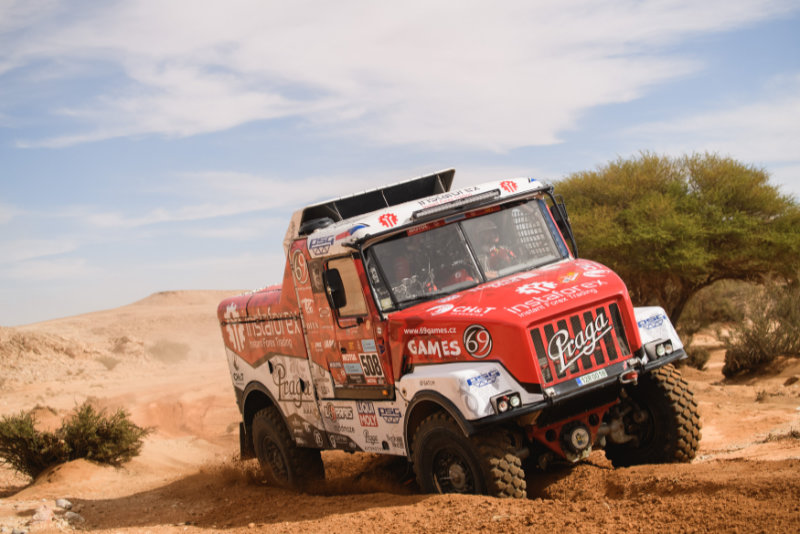 On Friday, January 7, this year’s Dakar Rally continued with another loop around Riyadh. However, this time, the competitors were brought to the west from the Saudi Arabia capital city. This special stage combined almost all types of terrains available in this country. And long segment in dunes was just the icing on the cake.

The sixth stage was mostly a battle between the Czech team of Ales Loprais, Jaroslav Valtr jr. and Petr Pokora and two Iveco trucks of Team De Rooy. While they were fighting directly with a Dutch driver Janus van Kasteren, it was a time battle at the waypoints with Kasteren’s teammate Martin van den Brink. However, in both cases, Praga V4S DKR was more successful.

“We’ve made ourselves happy today. We finished in fourth place but considering the pace and the way this competition is going, we must be thankful. The stage had a difficult terrain, with stones, rocks, and riverbeds, but at the end, we had beautiful dunes. Once again, I’ve got nothing but praise for Jaroslav and Butul, and the whole team for doing such a great job,” praises Ales Loprais.

“When it comes to terrain, today’s stage was one of the most beautiful ones we’ve had so far this year, I think. Beautiful dunes. But there were some spots where it was easy to potentially break a wheel,” adds mechanic Petr Pokora, also known as Butul. 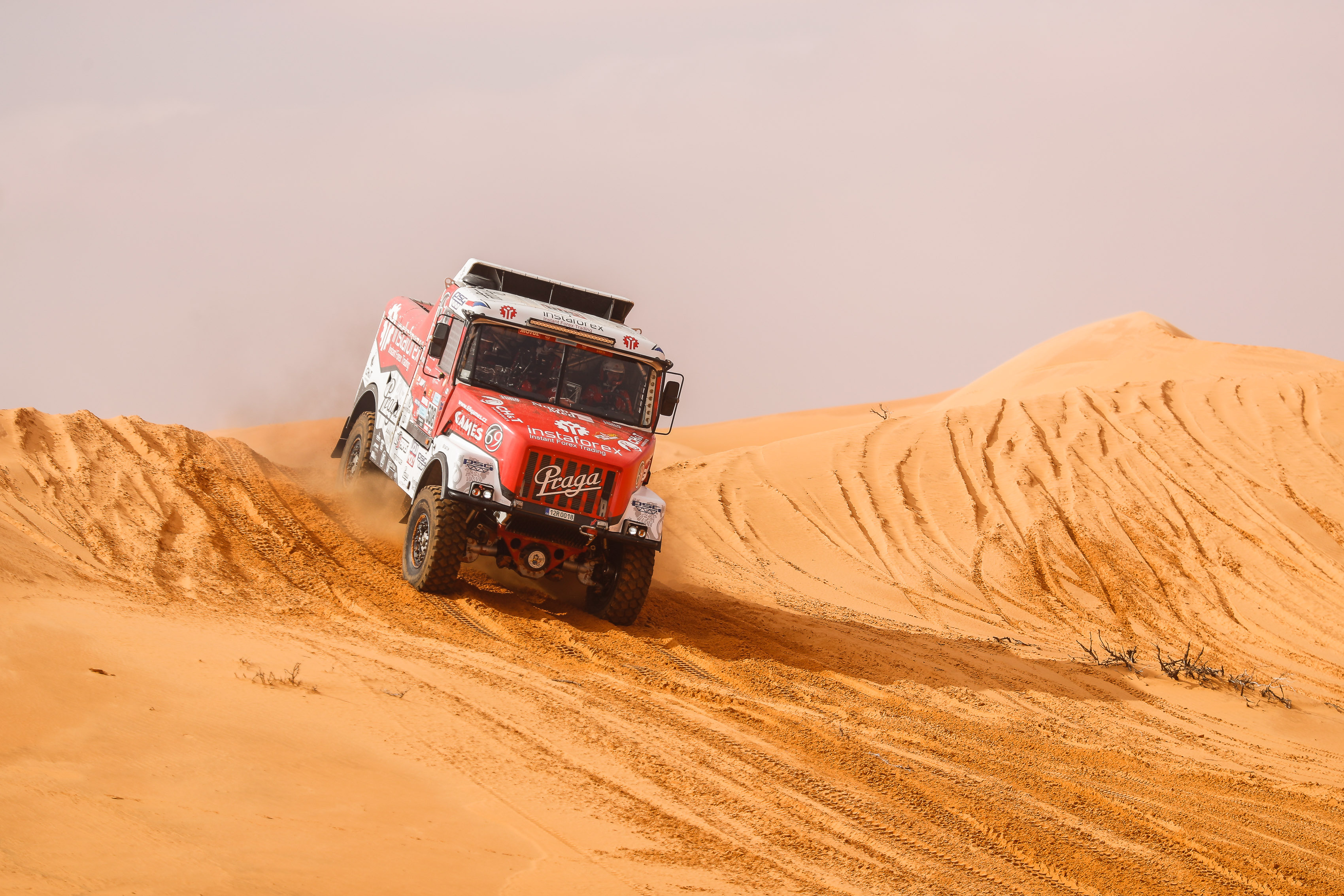 “When it comes to terrain, today’s stage was one of the most beautiful ones we’ve had so far this year, I think. Beautiful dunes. But there were some spots where it was easy to potentially break a wheel,” adds mechanic Petr Pokora, also known as Butul. 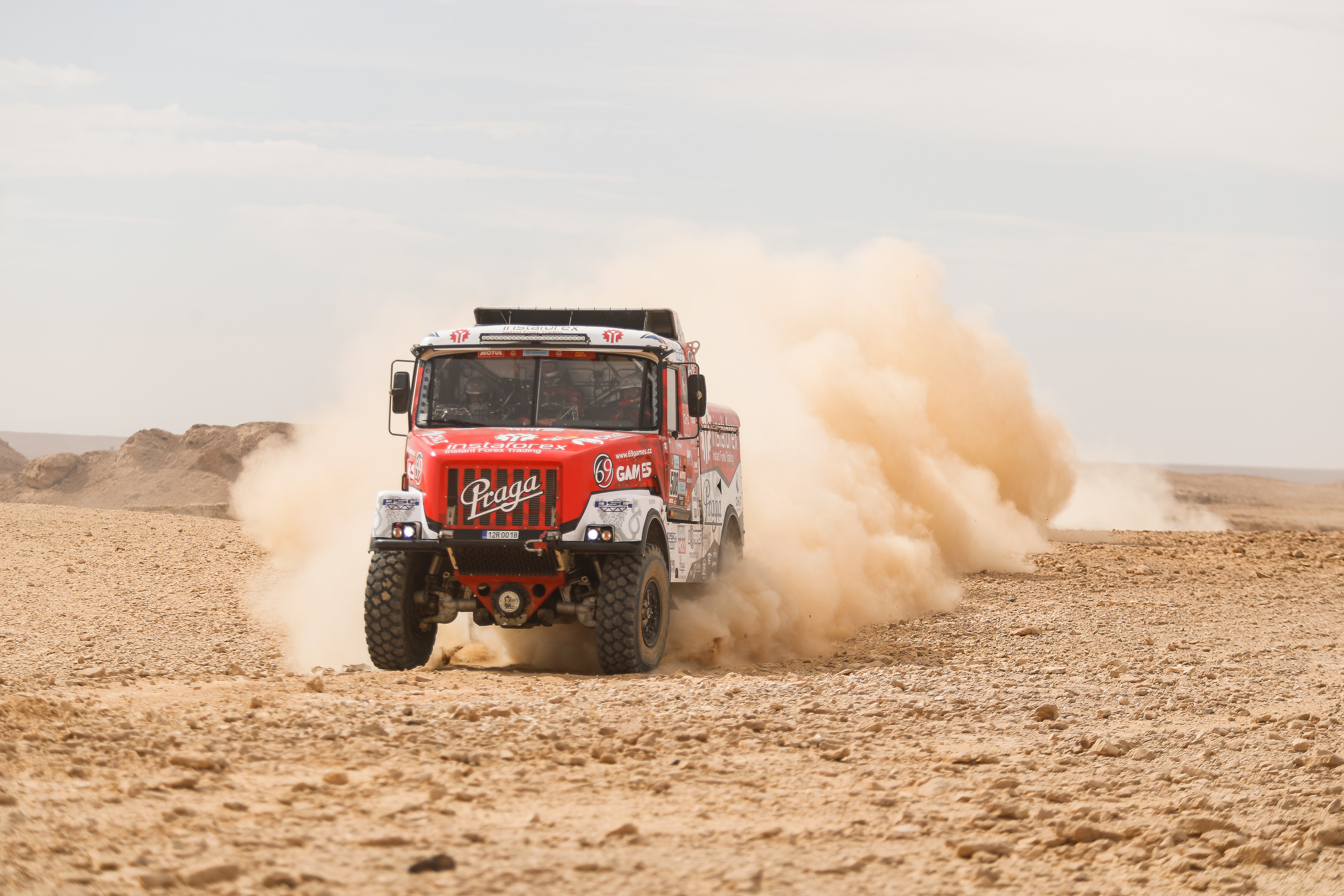 Friday’s stage confirmed once again the qualities of competition in the trucks category. At the end of the 348-kilometre-long stage, the top 10 finished only within 15 minutes of each other. The Praga #508 truck was only five and a quarter of a minute slower than the stage winner Andrey Karginov (Kamaz), and the crew was classified in fourth position. Also, they were able to gain almost six minutes on Karginov’s teammate Anton Shibalov, and seven and half minutes on van Kasteren.

Halfway through the competition, Loprais holds fifth place in the overall standings. However, he is only one minute and 26 seconds behind van Kasteren in fourth position. The gap to Shibalov in third place is now reduced under 30 minutes, while Karginov in sixth is now over 30 minutes behind.

On Saturday, January 8, the drivers are going to enjoy a rest day in Riyadh. The Instaforex Loprais Praga Team expects a busy day in the bivouac, working on the truck and also the bodies of all three team members, who require some necessary care.

“I’m looking forward to Bohous Jukl to take out a massage table and fix our necks and backs because we need it. Today, Butul was offering painkillers to us like in a pharmacy. But that’s how the Dakar should be,” smiles Ales Loprais.

On Sunday, January 9, the 2022 Dakar Rally will enter its second half with a 700-kilometre-long stage that leads from Riyadh to Al Dawadimi as the Dakar goes into new uncharted territory. In the first quarter of this 401-kilometre special, the competitors will face moving dunes, which requires a maximum amount of concentration. The rest of the special stage will be faster, but the maze of different tracks is going to test navigators and their judgment again.