After Friday's sharp longs, bulls on the pound demonstrated strength yesterday and managed to protect a rather important support level at 1.2094, which I recommend relying on today.

To continue growth, it is very important that the UK data come out at least according to economists' forecasts. Any deterioration can lead to a fairly large sell-off of GBP/USD. Given that the economy is tied to services, the decline in the composite index of business activity in the UK and the index of business activity in the services sector in June this year will put pressure on the pair. In case of a decline, bulls will again have to actively defend 1.2094, because having missed this area, you can say goodbye to the hope of a speedy recovery of the pair. Updating this level and forming a false breakout on it will be the first signal to open long positions with the goal of moving up to the area of 1.2155. A breakthrough and a top-down test of 1.2155 will provide a buy signal with the goal of updating 1.2207. A similar breakthrough of this level will lead to another entry point into long positions with the prospect of reaching 1.2267, where I recommend taking profits. A more distant target will be the area of 1.2329, but it is very early to talk about this, since the bears are in control of the market.

If GBP/USD falls and there are no bulls at 1.2094, and for this the bears have everything they need — all this will greatly affect the technical picture, which will increase the pressure on the pair. In this case, I recommend postponing long positions until the next support of 1.2038. I advise you to buy there only on a false breakout. You can open long positions on GBP/USD immediately for a rebound from 1.1977, or even lower – around 1.1938 with the goal of a correction of 30-35 points within the day. 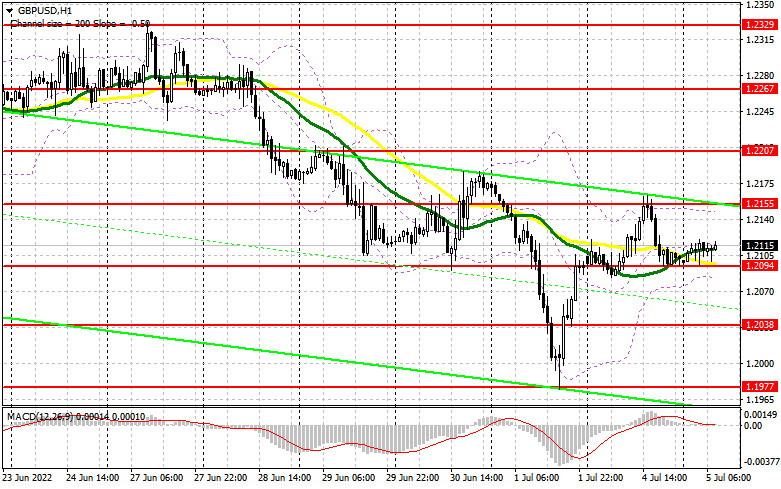 The bears tried to move below 1.2094 yesterday, but failed. However, it is worth saying that there are not so many people willing to buy the pound at current levels, since it was also not possible to go above 1.2155. In case GBP/USD grows after the release of UK activity data, forming a false breakout at the 1.2155 level will provide the first entry point into short positions in continuation of the bearish scenario and with the prospect of a return to 1.2094. Consolidating below 1.2094 and the reverse test from the bottom up will greatly affect the bulls' stop orders, which create an entry point for short positions on the pound with the goal of further decline to 1.2038, where I recommend partially taking profits. A more distant target will be the 1.1977 area, and there you can reach the annual low of 1.1938.

In case GBP/USD grows and the bears are not active at 1.2155, we will only have to rely on strong statistics for the United States and on the nearest resistance of 1.2207. A false breakout at 1.2207 will provide a good entry point into short positions in hopes of a rebound of the pair to the downside. If traders are not active at 1.2207, another upward jerk may occur amid the removal of stop orders of speculative sellers. In this case, I advise you to postpone short positions to 1.2267. You can look at selling GBP/USD immediately for a rebound from 1.2329, counting on the pair's rebound down by 30-35 points within the day.

Recommended for your reference:

The Commitment of Traders (COT) report for June 21 logged a reduction in both long and short positions, but there were more of the latter, which led to a slight decrease in the negative delta. Last week, inflation data in the UK confirmed the correctness of the Bank of England's position in relation to monetary policy. A sharp inflationary jump in May this year was not something surprising for traders, since even according to the official forecasts of the central bank, the consumer price index will exceed 11.0% by the end of the year. The big players, of course, took advantage of the moment and built up long positions as a result of another collapse of the pound, but now, according to the report, we see that there are fewer and fewer people willing to sell at the current lows, which plays on the pound's side. Apparently, the Federal Reserve's policy and its pace of raising interest rates will no longer surprise anyone, so it's time to think about buying cheaper risky assets. The COT report indicated that long non-commercial positions decreased by only 873 to 28,470, while short non-commercial positions decreased by 3,222 to 91,717. level -63,247. The weekly closing price increased and amounted to 1.2295 against 1.1991.

Trading is conducted in the area of 30 and 50-day moving averages, which indicates market uncertainty.

In case of growth, the area of 1.2155 will act as resistance. In case the pair goes down, the lower border of the indicator around 1.2085 will act as support.