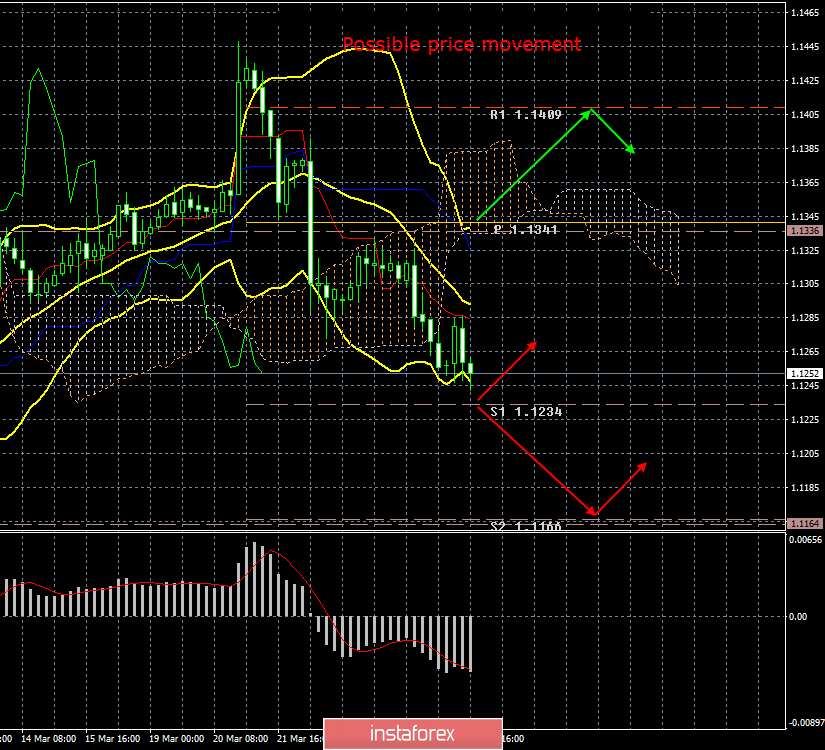 The only event of the day that could attract the attention of traders of the EUR/USD pair was ECB Head Mario Draghi's speech in Frankfurt. No one hoped this speech will affect monetary policy and turn out "hawkish". At best, it could be neutral. But in practice, Draghi again spoke of the "persistent deterioration in external demand," "high uncertainty," "risks that have grown in recent months," and "maintaining the ECB's position at rates until at least the end of 2019". Question: which of the above could somehow support the euro currency? The euro slightly rose at the beginning of the European trading session, but after a few hours, it began a much more logical fall, based on Draghi's rhetoric. Today, we believe the European currency's decline was reasonable. However, in general, despite all of eurozone's problems, we continue to insist that the fundamental factors of the dollar and the euro have been levelled off recently. Now the US dollar's position does not appear unconditional. Thus, from our point of view, the pair retains good chances for starting the formation of an upward trend in the near future. However, of course, it is not worth wondering exactly when it will begin and whether it will start. It is better to wait for specific signals from the Ichimoku indicator or other technical indicators. Until then, there is a high probability that the euro will further fall. The pair, by the way, fell again to absolute lows over the past year and a half. Will it manage with its eighth attempt to overcome the area of 1,1200 - 1.1270?

The EUR/USD pair continues to move down. Thus, now, short positions are still recommended for the target of a support level of 1,1234, and in case the first target has been overcome - for the target of 1,1166. However, it is not a fact that traders will be able to overcome the support area mentioned above.

It is recommended to consider long positions only when the pair manages to consolidate back above the critical line, with a view to the resistance level of 1.1409.